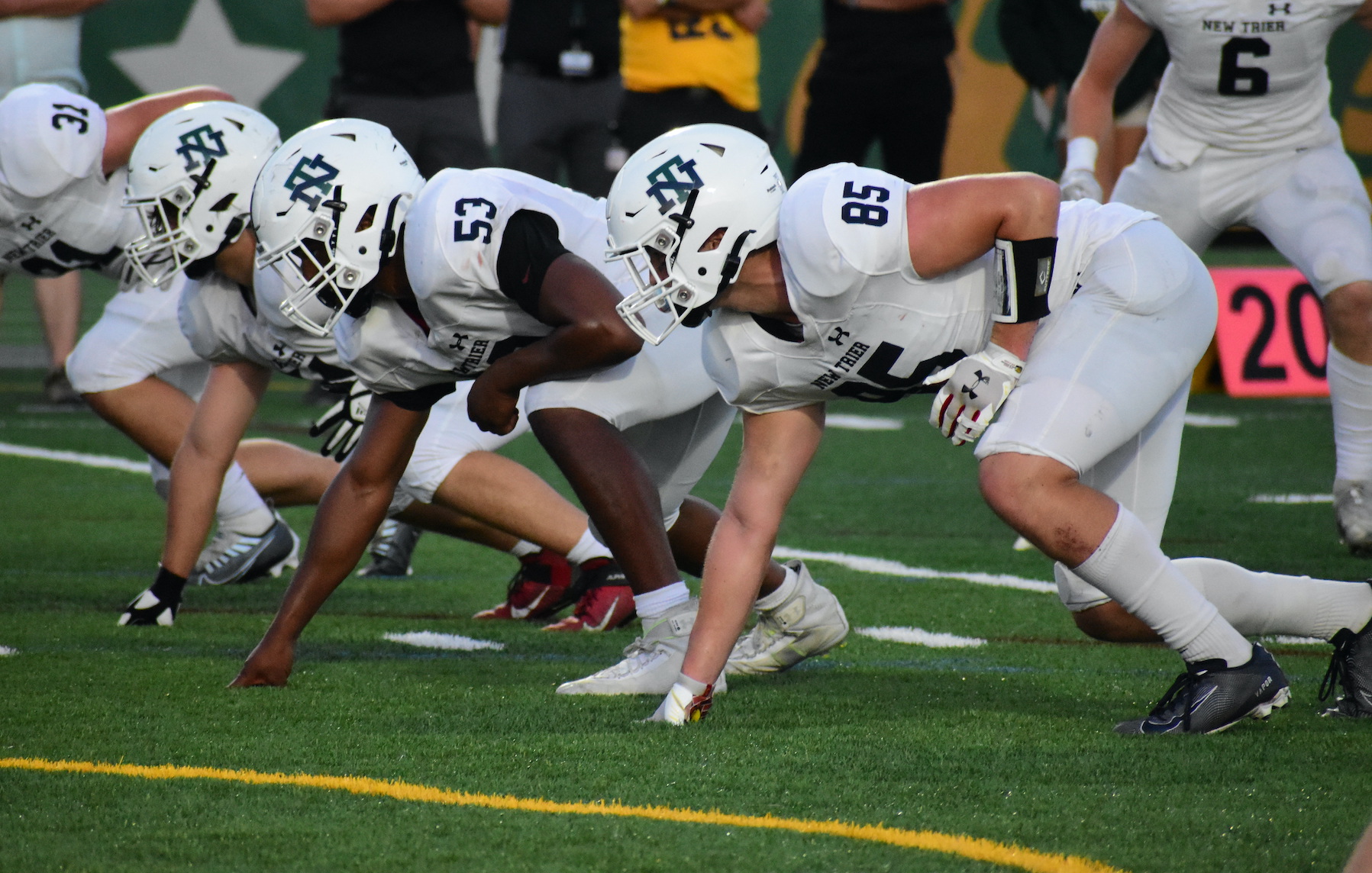 The Trevians defensive line during a game earlier this season. | The Record File Photos

New Trier’s Week 3 result was far from what the Trevians wished for, but the young team hopes its strong second-half performance will spark greater success heading into its final nonconference game.

The visiting Trevians lost their third-consecutive game to open the 2022 season, falling to the 3-0 Palatine Pirates 34-14 on Friday, Sept. 9. It is the first season New Trier football has started 0-3 in at least 28 seasons; the Trevians have not lost more than five times in a season since 1993 (1-8).

After entering halftime down 20-0, the Trevians played their best football in the third and fourth quarters, producing multiple scoring drives for the first time this year.

“(Palatine) is a good team. They’re 3-0 for a reason,” New Trier head coach Brian Doll said. “They’ve beaten a couple of good teams already. I really think this is the best team we’ve probably seen this year so far. For us to fight in the second half and play an even second half against a team of this caliber is something to talk about and build on.”

The Pirates started the night with a methodical 15-play, 80-yard scoring drive that finished with a 1-yard touchdown run on fourth down. After Palatine’s defense forced a three-and-out from New Trier’s offense, the Pirates embarked on another back-breaking drive.

Palatine’s momentum seemed stall early in its second series, but the Pirates converted a crucial third-and-15 play — one of several key third-and-long conversions for Palatine early in the game.

“We had moments in the first quarter where we almost had big third-down stops, but we were just a little bit short,” Doll said. “But we got better and better as the game went on and we made a ton of plays on defense tonight. That’s going to make us better down the road.

Palatine added its third score of the first half late in the second quarter when quarterback Grant Dersnah finished off a 69-yard drive with a 9-yard touchdown pass.

The Pirates tallied 223 yards of offense in the first half alone, while their defense allowed New Trier to amass just 32 yards through two quarters.

New Trier got on the board in the third quarter when Patrick Heneghan ran in a 6-yard touchdown on a quarterback draw. The Trevians added another score in the fourth quarter when Heneghan connected with junior Miles Cremascoli on a 79-yard touchdown.

Cremascoli finished the night accounting for the majority of New Trier’s offense. He hauled in six passes for a total of 119 receiving yards. The wideout hopes the offense’s second-half performance will lead to a stronger start next week.

“We hope to use some of the plays that worked well in the second half because we were trying different things and we really hope to build off of those and just use that to be better in the first half of the next game,” he said.

Cremascoli also believes that future success on the field will need to begin in the days leading up to a game.

“One of our biggest messages is working hard during the week,” he said. “We have to be going hard and be going 100 percent all week and be doing everything that we can to become the best team we can for game day.”

The Trevians will continue the search for their first win when they return to their home turf Thursday night, Sept. 15, against Fremd.

The team’s coaching staff is eager to see progress on both sides continue.

“I have to be honest, I’ve seen improvement with our team each week,” Doll said. “I didn’t see anybody give up tonight and I thought they fought until the end, which is a really good sign for them and hopefully their confidence will build off of that.

“We are going to really focus on staying positive and getting a win next week on Thursday night against Fremd. … This is a winnable game for us. We have to focus on getting it done. … It’s a must-win situation for us. That’s where it’s at and we have to find a way to do that.”