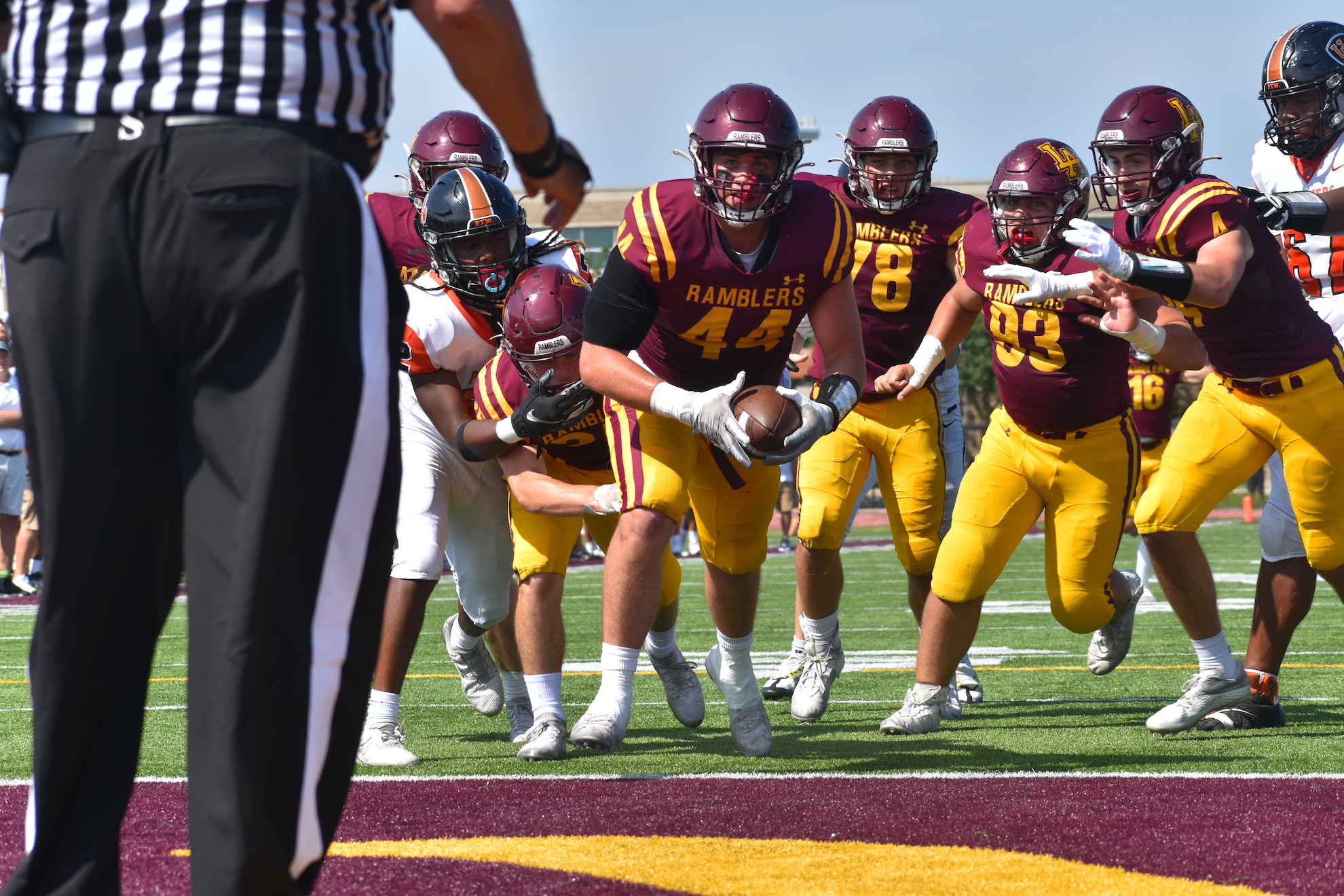 Loyola's Rocco Izzo (44) returns a botched punt for a touchdown in the Ramblers' rout of visiting United Township on Saturday, Sept. 3, in Wilmette. | Photos by Joe Coughlin/The Record North Shore

In Illinois high school football the running clock is activated when a team has a second half lead of 41 or more points.

With 4 minutes 5 seconds remaining in the third quarter of Loyola Academy’s game with United Township of East Moline the Ramblers took a 47-point lead and the timepiece on the Hoerster Field scoreboard was off and running.

Tuning up for the start of their Chicago Catholic League season, the Ramblers went on to win the Saturday, Sept. 3 mismatch 61-7.

The Ramblers dominated every phase of the game in picking up where they left off six days earlier on their home field when they opened the season by routing St. Xavier of Cincinnati 44-20 on ESPN.

They struck for three touchdowns in the first 4 minutes 24 seconds, and by the end of the first quarter they were on top 27-0, leaving no doubt as to what the outcome would be.

Showing the way was senior quarterback Jack Steaney, who ran 24 and 4 yards, respectively, for the first two touchdowns and connected with senior tight end P.J. Hayes on a 49-yard pass for the third. The other TD came on a 28-yard interception runback by senior defensive back Joe Auer.

“I was in the middle of the field and Jake made a great throw,” Hayes said “I caught the ball and saw the open grass.”

At the start of the second quarter, fellow senior Luke Collins replaced Stearney at quarterback and was joined on the field by a host of other substitutes. For the remainder of the game, coach John Holecek continued to give his reserves extended playing time.

“We have a team of 120 players and it’s really nice when you get to rotate some kids and see what they can do,” Holecek said. “The key backups — 23 through 40 — work hard and don’t normally get much time. We wanted to get them in early.”

“I was in the right place at the right time and I just reacted,” Izzo said. “I didn’t even know if it was going to count.”

United’s lone touchdown came earlier in the second quarter when junior quarterback Matthew Kelley broke through the right side of the line in a third-and-1 situation at his own 29 and took the ball all the way to the end zone. The extra point kick by senior Medin Schic made the score 27-7 with 7:48 to play in the half.

The visitors got the football back immediately when they recovered an onside kick at the Loyola 49.

But the Ramblers’ defense immediately took assertive action. Confronted with a fourth-and-23 situation would-be punter Kollin Taylor, was the victim of a bad snap and the senior was smeared at his own 10-yard line. A 7-yard pass from Collins to Hogan put the ball on the 3 and MacPherson ran it to the end zone from there for the sophomore’s second touchdown of his varsity career that began in last fall’s playoffs.

On Loyola’s next possession, Collins threw the touchdown pass to Fitzgerald.

“That was a heck of a catch Jack made,” said the backup quarterback. “Every time I get put in I know I can do my job. I trust our offensive line and our receivers.”

The last two touchdowns for the Ramblers were scored in the third and fourth quarters by junior running backs who came off the bench. Harry Yeboah’s 27-yard run activated the running clock, and Scott Blakeslee went over from 1 yard out.

For Auer, Hayes, Izzo, Yeboah and Blakeslee, the TDs were the first of their varsity careers.

Baker split kickoff duty with senior Brendan Davoren — each doing five — and they put on powerful performances. Baker averaged 59 yards per kick and his replacement averaged 57.8.

Even though he played only one quarter, Stearney was the dominant offensive player in the game. He completed 7 of 8 passes for 115 yards and added 28 yards rushing in two carries.

“I was happy we got all of the guys in and they got the chance to show what they can do,” Stearney said. “All four of our quarterbacks played.”.

Collins was 3-for-3 passing for 48 yards and junior Lucas Holubar was 2-for-2 for 15 yards. The fourth quarterback, junior Freedom Ali, didn’t have any passing or running attempts but showed poise in directing the offense.

“I’m very grateful that United Township came up here to play us,” Stearney said. “We originally didn’t have a Week 2 game and by them enabling us to play we picked up playoff points.”

Ranked No. 2 in the metropolitan area behind Mount Carmel by the Sun-Times, the Ramblers will head to the South Side for their next game at St. Rita on Friday night, Sept. 9.

After finishing second in the Class 7A playoffs last season, St. Rita is off to a 1-1 start, rebounding from a 35-3 loss to Mount Carmel to topple Brother Rice 17-12.

“Now, the level of competition goes way up,” Holecek told his Ramblers after the landslide victory over United Township. “It’s going to be a battle (at St. Rita).”