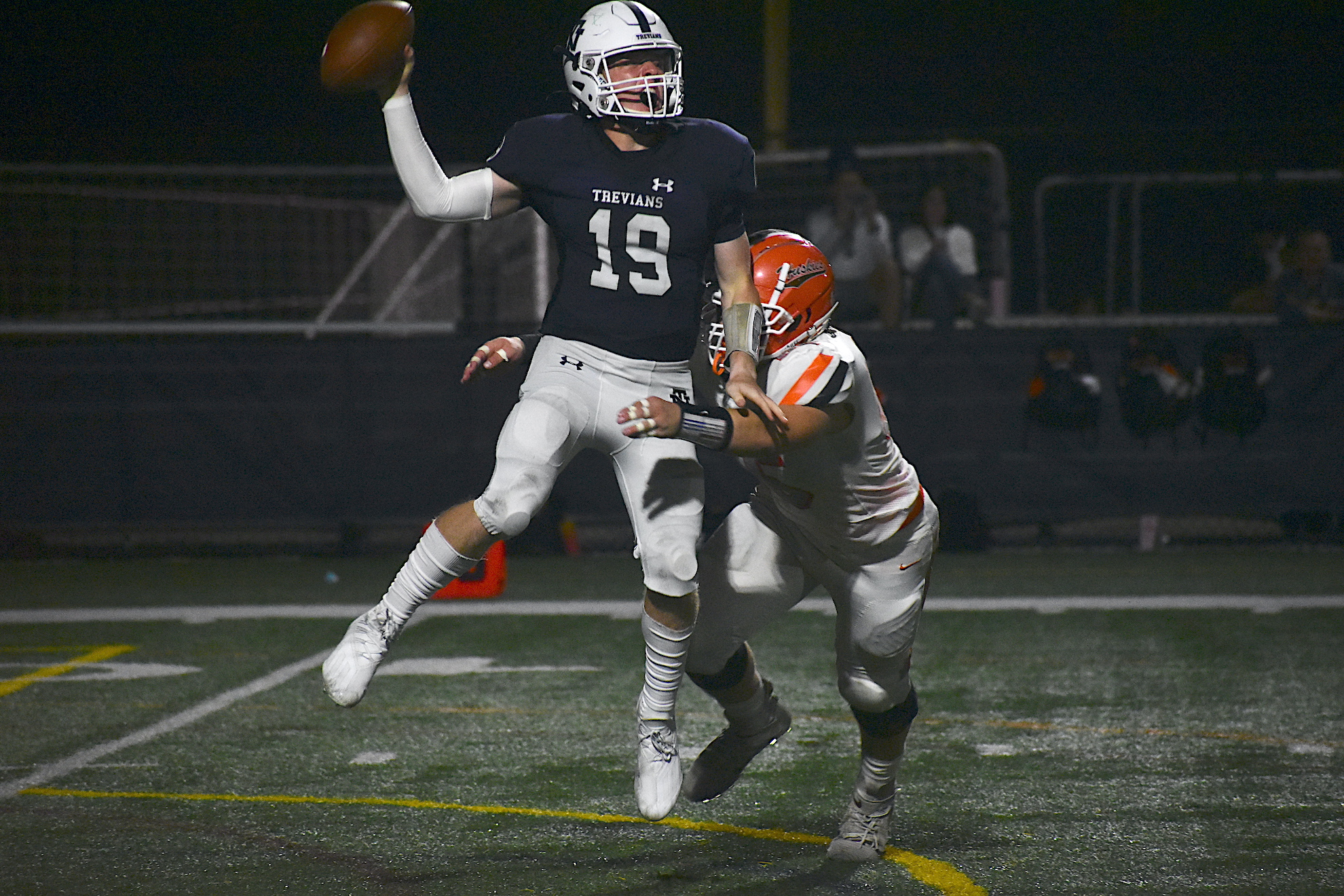 New Trier sophomore quarterback Patrick Heneghan is hit by a Hersey defender as he releases a pass during the team's 31-0 loss Friday, Aug. 26, in Northfield. | Joe Coughlin/The Record North Shore

After eight seasons as the head coach of New Trier, Brian Doll has experienced almost everything that high school football has to offer. But Week 1 of the 2022 season ended with an unfamiliar feeling for the longtime Trevians’ coach: an opening-night defeat.

The visiting Hersey Huskies outplayed New Trier from start to finish during a 31-0 victory over the Trevians on Friday, Aug. 26, in Northfield. The loss was the program’s first season-opening defeat under the guidance of Doll.

“We struggled in every aspect of the game tonight; whether it was on offense, defense or special teams,” Doll said.

Hersey’s defense set the tone for the evening on the game’s opening drive, stopping the Trevians on a crucial fourth-and-2 attempt at the Huskies’ 30-yard line. The Huskies followed up the key defensive stand with an 11-play drive that ended with a 35-yard field goal, giving them a 3-0 lead that they carried into halftime.

New Trier seemed poised to rally after forcing a three-and-out from the Huskies’ offense on the opening series of the second half. But Hersey’s defense quickly stymied any signs of progress from the Trevians’ offense.

The Huskies then went on to dominate the game’s third quarter, scoring 21 points in the final five minutes. Hersey’s offense delivered two key scoring plays: a 54-yard touchdown run from Brett Kersemeier and a 28-yard touchdown pass by Carter Hansen to Carson Grove.

Grove also produced the final blow to New Trier’s hopes for a comeback when he returned a punt 65 yards to put the Huskies up 24-0.

“We gave up a couple of big plays after we went three-and-out,” Doll said. “And, offensively … if you don’t get some first downs, or get some movement there, it can swing the game quickly. Then you (give up) a big play … and it kind of takes the air out of the stadium. After that, it was the same errors over and over again and our guys were playing a little more tentative at that point.”

New Trier will need to rely on its next era of leaders this season on both sides of the ball after graduating key contributors from the team’s 2021 playoff group.

The Trevians had a new quarterback under center for the first time since 2019, as sophomore Patrick Heneghan stepped in to fill the void left by three-year, All-Conference standout Nevan Cremascoli. Heneghan finished the night with 133 yards passing.

New Trier will also likely utilize junior Dylan Jeppe at the quarterback position, according to Doll.

The Trevs showcased several new weapons their offense hopes to deploy at the skill positions. Junior Miles Cremascoli had six receptions for 64 yards while Jeppe, running back Jackson Ochsenhirt and receiverBen Prouty combined for the majority of New Trier’s remaining yardage.

New Trier will also likely lean on junior running back Jackson McCarey, who was sidelined Week 1 with an injury. Doll said the team is “looking forward to getting him back within the next week or two.” Doll added that New Trier also played without key contributors on the offensive line.

Although expectations for the group’s newcomers are high, the team’s coaching staff knows the Trevs’ inexperience will lead to some bumps in the road early on.

“We had a lot of new guys on the field tonight, and there were a lot of mistakes made,” Doll said. “A lot of penalties, a lot of missed tackles; so it’s a lot of basic stuff. But I don’t want to get too down on this (result). I knew we were going to be young and fresh, and we have some key guys out right now. … We weren’t able to overcome that tonight and fill in where we needed to step up.”

New Trier will head on the road next week for a matchup with Stevenson, a team the Trevians beat 32-14 last season.

“We’ll have to look at next week — with Stevenson and going up to their place — as an opportunity to get better and hopefully play better than we did tonight, because this is about as bad of a start to a first game that I’ve seen,” Doll said.