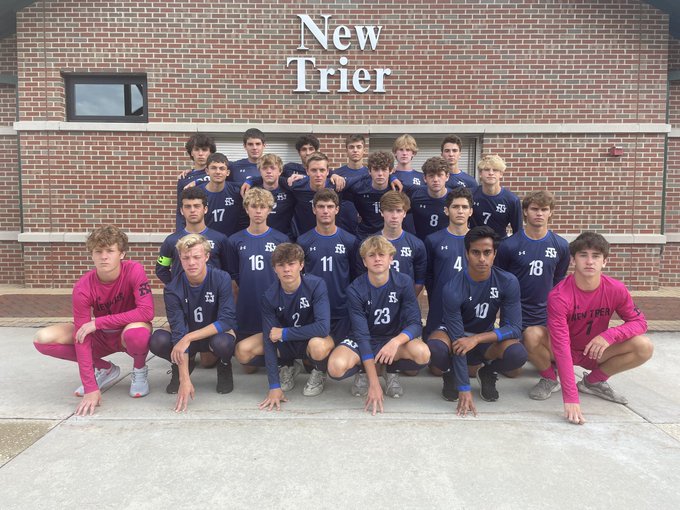 The visiting Trevians picked up the nonconference victory on Thursday, Aug. 25, in Lombard to move to 2-0.

The Ramblers earned the draw against the visiting Dolphins Wednesday, Aug. 24, in Glenview.

Evan Kanellos added a goal and an assist for New Trier.

Guillermo Echevarria-Robinson and Olivier Szorc tallied for the host Ramblers in the season-opening victory Monday, Aug. 22, in Glenview.

Ava Bogan racked up 8 kills and 4 blocks while Gabby Charlier dished out 17 assists for the Ramblers on Wednesday, Aug. 24, in Wilmette.

The Giants dropped their home opener in the league crossover battle on Wednesday, Aug. 24, in Highland Park.

Peyton Bertsch finished with 7 kills while Maya Kozik had 5 in the Panthers’ loss Tuesday, Aug. 23, in Wilmette.

The visiting Giants fell to their nonconference opponent on Tuesday, Aug. 12, in Hoffman Estates.

Haneefa Adam had 5 kills and 2 aces and Grace Leahy added 5 kills to lead the Panthers on Monday, Aug. 22, in Chicago.

Alexa Green carded a 36 ad Amy Beanblossom a 38 in the battle of state powers on Wednesday, Aug. 24.

Grace Leber chipped in a 40 for New Trier.

Alexa Green finished with a 40 to lead the Trevians to victory Friday, Aug. 19, in Winnetka.

Maggy Shaw shot a 47 as the Panthers took second in the three-team meet on Tuesday, Aug. 23, at Billy Caldwell Golf Course.

Noah Zyung (32) and Johnny Creamean (33) were the low scorers for New Trier, which placed first in the four-team meet Wednesday, Aug. 24, at White Deer Run in Vernon Hills.

Noah Zyung and Alex Creamean shot 73s to pace New Trier to a first-place finish in the 12-team meet on Monday, Aug. 22, at Inverness Golf Club.

Johnny Creamean chipped in a 75 for the Trevs (299), who finished two strokes ahead of Prospect and six ahead of Glenbrook North.

Alex Finger shot a 72 and Aiden Landes a 77 to help Highland Park to a fourth-place finish on Monday, Aug. 22.

Oliver Barr’s 73 guided New Trier to the team title at the league meet on Saturday, Aug. 20.

Will Leber and Logan Keeter each shot a 79 to help the Trevians.

Ryan Banas shot a 5-over 77 to lead Loyola Academy to sixth place at the 13-team invitational Saturday, Aug. 20, at Bittersweet Golf Club in Gurnee.

Kat Schuenzel won 6-1, 6-4 at top singles for the Panthers, who earned the league win Wednesday, Aug. 24.

Emma and Maeve Kostyk, Margaret Clancy and Lexie Tingle, and Emily McDermott and Kylie Hammer were all straight-set winners in the doubles for Regina.