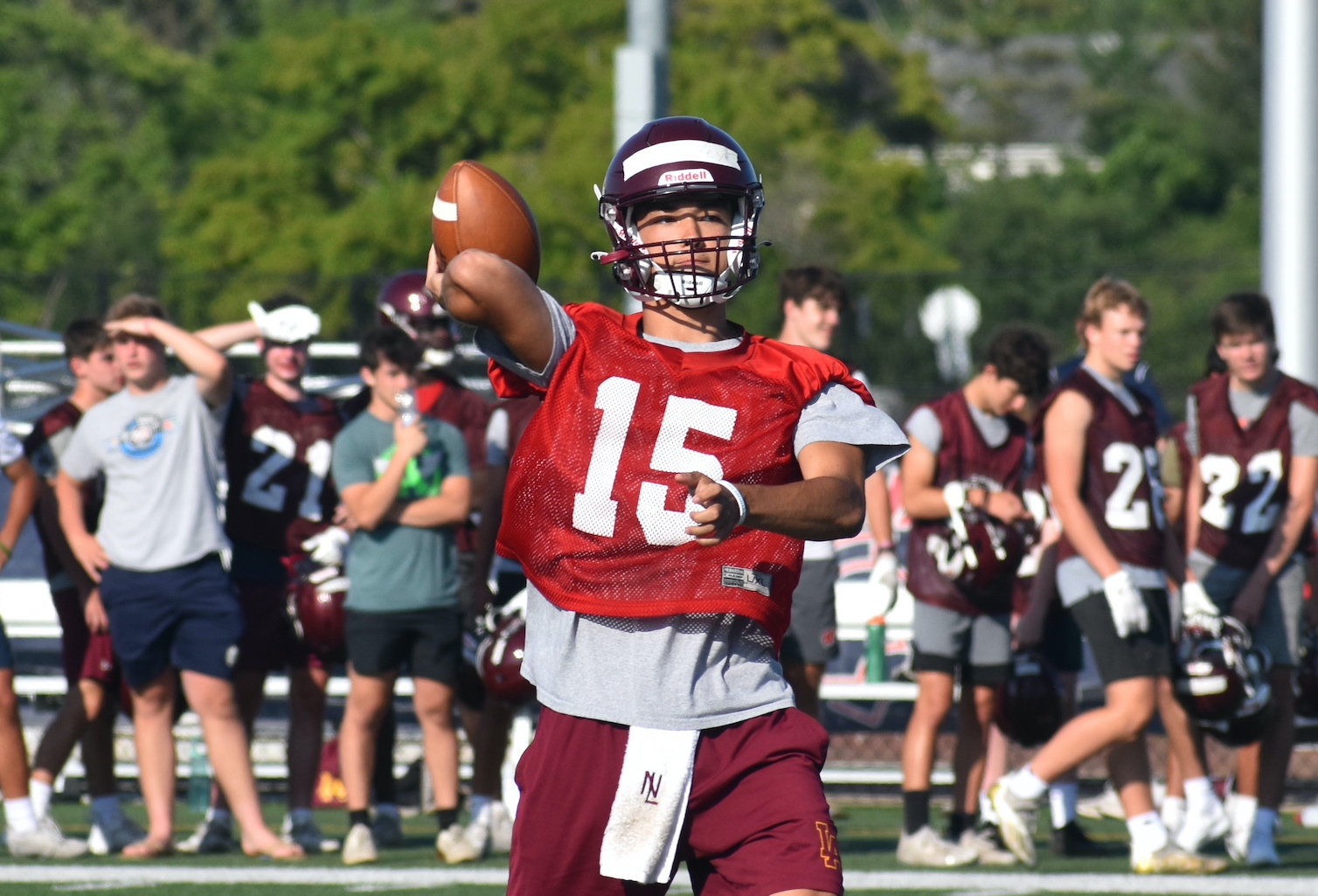 Jake Stearney, a second-year starting quarterback for Loyola, sets for pass during a 7 on 7 in July. | The Record File Photo

Jake Stearney is a senior quarterback for Loyola Academy football. The 2021 All-State pick will play for Colgate University after graduation.

Typically, I don’t really talk to many people. I just get dialed in and listen to music. I get to the field about an hour and half before everyone. I like getting there early, getting my stuff together and locking in before the team gets there.

2. Why is Colgate a good fit for you?

I wanted to look for a school that would set me up for the years after my four-year career there. I looked for more long-term and it set me up best academically and playing at a highly competitive level in Division I. … The coaching staff at Colgate was more personable toward me and I really connected with them right away. Another key factor for me was Loyola guys that go there — Marco Maldonado (RB) is there now and so is Rory Boos (WR), Jack Badovinac (OL) was there. Talking to those guys and hearing what they have to say really gave me a great picture of where I want to be the next four years.

It’s not football related, but a hobby of mine is fishing. Any chance I have to fishing I like to do that. And then just hang out with friends and stuff like that.

4. Other than playing in the NFL, what is your dream job?

Well, being an NFL player has always been goal of mine since I was a kid. I’m not going to lie, I have not really thought of a dream job, but at Colgate I’m studying finance and economics so something along that path. I’m hoping something related to sports. They are a big part of my life and something I enjoy.

Baseball. Ever since I was little, baseball and football have been the two biggest sports I enjoy. I was big in travel (baseball) and all that. Once I got to freshman year, I was like all right, some kids can play both, but at the quarterback position … playing both would be hard. I picked football over baseball because enjoy football a little bit more. Looking back, baseball was awesome. I wish I could play again.

6. In football, if you could play another position, what would it be?

It would probably be on the offensive side of the ball — a slot receiver or outside receiver. Throwing to those guys constantly, I always wonder what it’s like on other end, catching a touchdown pass. I’ve played quarterback a lot, but in eighth grade I played right guard because I was above the weight limit. It was cool and kind of humbling, because now I know what my guys up front are doing for me. I know what it takes.

7. What is your favorite television show right now?

Definitely NFL Network, just keeping up around the league, and College Gameday. But I’m also big on history and forensics stuff, so any criminal shows or history shows I really enjoy.

Definitely my favorite candy. I’m a big Skittles guy, the sour Skittles, the biggest pack they have. And probably like a Dr. Pepper.

My mom was born in Japan and ever since I was young, she spoke Japanese to me all the time, so I guess that’s a third language (English, Spanish) I speak and understand.

10. What’s the key for you guys to get to where you want to be this season?

State is obviously the goal of every year. It’s taking one game at a time and not looking too far ahead. Just got to play our game and know what we have to do against each opponent — not get ahead of ourselves. Loyola football is mental and physical. We play some tough opponents, so treating each team the same, not getting overconfident. I like where we are headed.