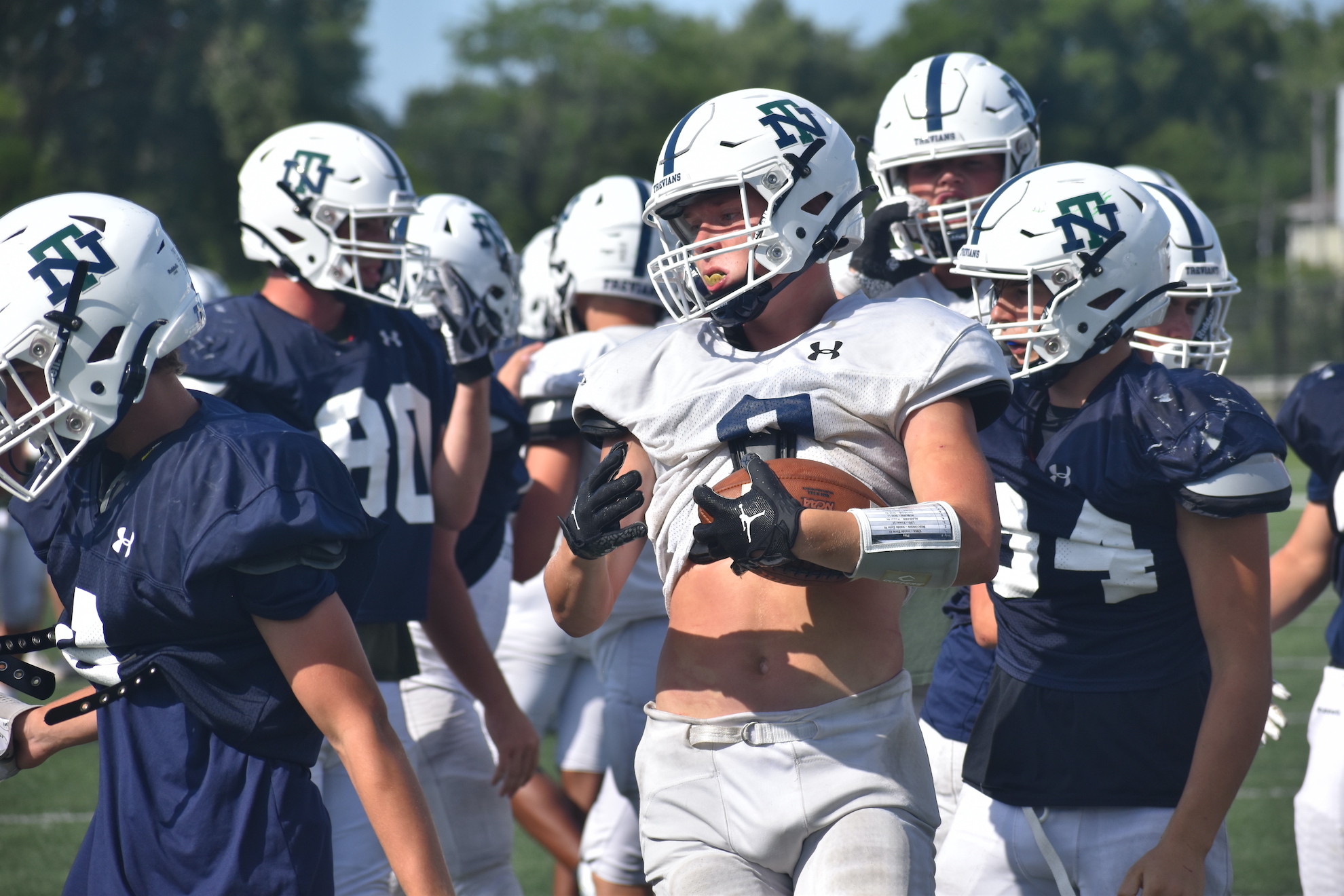 Miles Cremascoli finishes off a run in practice. The junior is expected to be an offensive playmaker for New Trier. | Photos by Joe Coughlin/The Record North Shore

They grow up so fast — or so New Trier football coach Brian Doll hopes.

While the 2022 Trevians are grounded by a handful of seniors, Doll called the junior class special, and plenty of them will play key positions all over the field. A year of varsity development, he said, could make the Trevs a late-season problem for opponents.

“One of the things I’ve learned as a head coach is sometimes when your juniors get to the end of that season, they start to act like seniors,” he said. “And so this group, with the youth we have, can improve a lot. And maybe more than some of the previous years we could have some early-season mishaps … but as they grow and they move forward, reality is we could be really dangerous by the end of the year.”

In 2021, the Trevians played two football seasons, including an unprecedented spring campaign delayed as part of COVID-19 precautions. In that shortened campaign, New Trier amassed a sparkling 5-1 record but graduated a bevy of seniors, especially on the defensive side of the ball.

The attrition led to an inexperienced defense the following fall that never found its groove. The dynamic offense — which led by three-year starting quarterback Nevan Cremascoli averaged more than 30 points per game — was the Trevians calling card and led them to a 5-4 mark and a playoff berth, a special result after they missed the postseason in 2019 for the first time in 16 years.

Resetting for the 2022 campaign, Doll and company are looking to revive that defense as one of the best in the Central Suburban League.

“I feel a little more balanced this year,” he said. “Defensively, we’re going to look a little bit more like that (spring 2021) group with our speed. … I feel comfortable with who we have and I’m extremely excited about the defensive line.”

A junior and All-CSL pick a year ago, Ty Stringer returns to lead the front line of defense. Playing on the interior as a sophomore, Stringer led the line with 50 tackles and four tackles for loss last season. Doll called him a “suburb athlete” with “Division I speed.”

Stringer will play with Liam Fitzgerald, a pass rusher who also will play on offense, and newcomers Jayden Salazar, a sophomore tackle; and Buzz Vollmer and Franklin Zoloto, both ends.

Fitzgerald, part of that special junior class, is amped to see what he and his defensive mates can do.

Backing up the line will be a new set of starting linebackers, including senior middle linebacker William Morrison and strong-side Charlie Gardella. Speedster Charlie Blankstein and Tyler Jackson will get looks on the weak side.

“You hear all these juniors and the reality is these juniors are good,” Doll said. “And we think they’re ready to play. It’s going to take a little while on mental preparation and seeing the speed, but we feel they are physically, very capable of doing it.”

On the other side of the ball, the Trevians are replacing an All-CSL tailback (Jack Cummings), a college-level quarterback in Cremascoli — now playing for Northern Illinois University — and his top five receivers.

Helping with the transition is a family name: Miles Cremascoli, Nevan’s younger brother. A 6-foot-3, 200-pound junior wide receiver, Cremascoli is already getting looks from college recruiters and will be a prime target for New Trier’s sophomore quarterback Patrick Heneghan.

With slick catches and physical running, Cremascoli has impressed his coaches and wants to be a spark plug for the young Trevs offense.

“I hope to bring a lot of energy. In practice, when we are high-energy, we seem to play better,” he said. “And I hope to bring leadership. We need some leaders on the team, seeing as we don’t have the biggest senior group.”

Heneghan will also access a receiving corps that includes Fitzgerald and seniors Ben Prouty and Charles Olges, who was a starting defensive back for New Trier last fall before an injury.

Heneghan, a big-armed thrower who played with the freshman a year ago, is Doll’s third sophomore quarterback (Cremascoli, Carson Ochsenhirt) in his eight years leading the program. He said not everything will go right for his young quarterback, so how Heneghan handles adversity will play a big role in the Trevians’ success.

“It’s having the right mindset,” Doll said. “The thing I love about Patrick is he really is a leader. And the kids do look to him and respond to him. And he’s taking the coaching and the adjustments as we go.”

McCarey returns to the backfield, where as a sophomore he racked up 505 yards rushing and five scores. Ochsenhirt is slated to see plenty of carries as well.

With all the new faces, Hurley said it is key they all are pulling in the same direction.

“Just coming together as a team and rallying around each other, supporting everyone and going out on Friday night and playing as one big family, having that common goal in mind: winning games and making the playoffs,” he said.

The Trevians also have the benefit of one of the top placekickers and punters in the nation in sophomore Niki Dugandzic, who has been known to drill 60-yard field goals in practice. Doll smiled when he said that the Trevians won’t be afraid to kick this season.

New Trier opens its season with a fresh opponent, the Hersey Huskies, whose high-flying offense carried them to a 7-2 regular season in 2021.

Since Doll took over in 2014, the Trevians have not lost a season-opener. Doll and company believe starting off on the right foot is good for the team and community, and it is no different this year, even with the bigger challenge.

“We put a lot of stress on it. We want to start off on a positive note,” he said.

The next goal is to win the conference, and that path has run through Maine South for the last couple of decades.

The Trevians lost three league games last season (Maine South, Evanston, Glenbrook South), but they believe a conference crown and then some are within grasp.

“And then we want to see success in the playoffs,” Doll said. “We don’t just want to get there. A lot of people talk about what’s realistic, but we truly believe we can win playoff games if we stay healthy and get focused.”