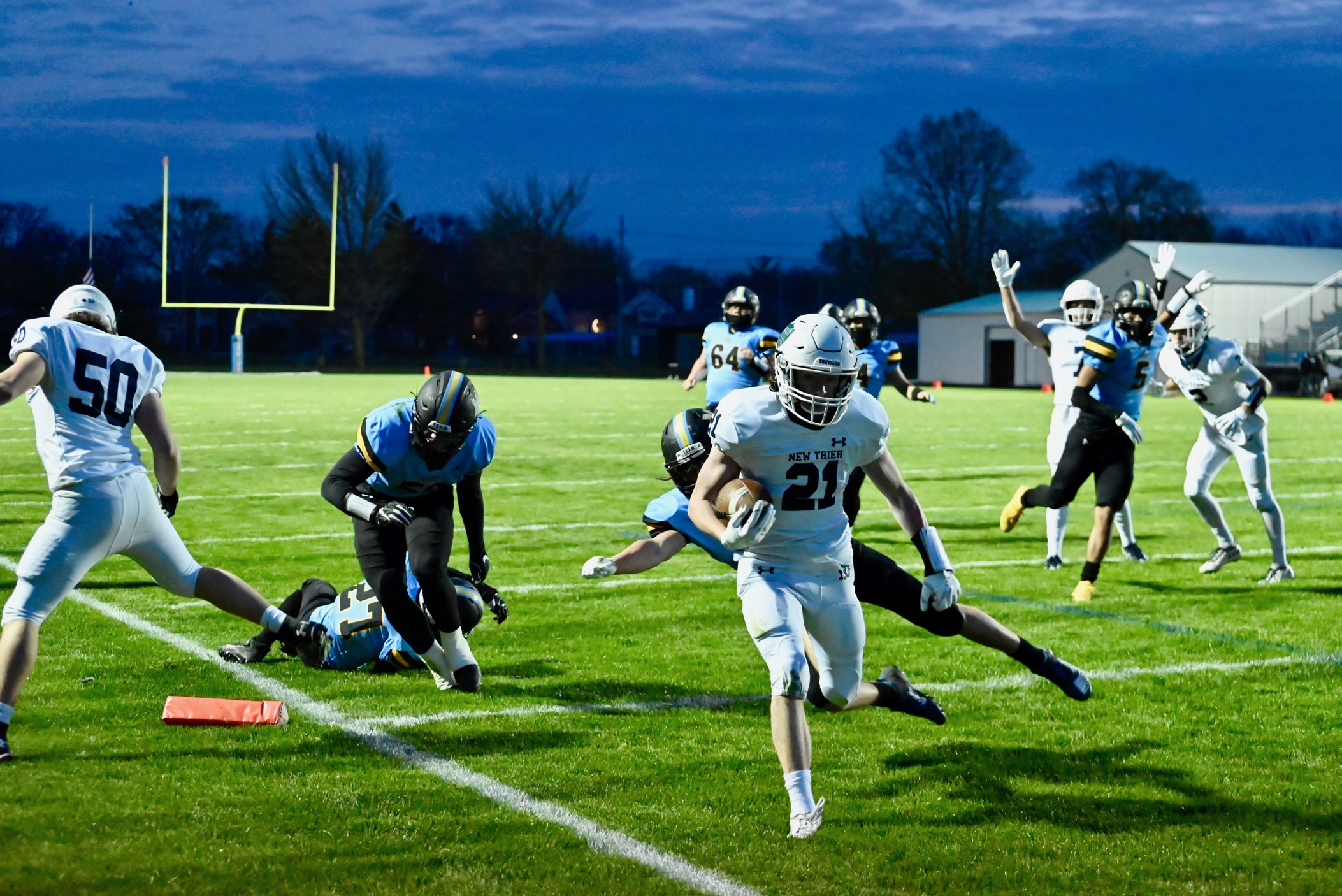 As teams around the state prepared to conclude their 2021 high school football seasons, New Trier feared its already abbreviated campaign would come to an end one game sooner than expected.

After a canceled league crossover bout, the Trevians were excited to find a season finale featuring a special matchup against Saint Charles East at Northern Illinois University. But hours before kickoff, that game was also canceled, leaving the Trevians again without a Week 6 opponent — and little hope to take the field one last time.

But New Trier’s “crazy” season had one more surprise left in it.

Moments after the cancelation, the Trevians secured a game with Maine West, allowing both Central Suburban League schools a chance to close the year on the field instead of the sidelines.

Cancelations to the original Central Suburban “bowl” game, the NIU game and Maine West’s originally scheduled game were all related to COVID-19.

The Trevians took full advantage of their third chance at a fitting finish, as they defeated the Warriors 35-20 on Friday, April 23, in Des Plaines. The victory gave New Trier a 5-1 final record.

“We didn’t really think we were going to have a game. We thought we were just going to end up scrimmaging,” New Trier’s Tyler Hardin said. “But we have an amazing athletic director (Augie Fontanetta) who pulled it through and I am just so thankful that we had a game to play and just one last time to get out there with the team.”

Hardin was once again a key contributor during the Trevians’ 15-point, season-ending win. The senior scored two touchdowns — one on a 9-yard reception and another on a 2-yard run — while racking up 85 yards of total offense (70 receiving, 15 rushing).

“With everything that we’ve worked for in such a crazy year, we really didn’t know what was promised,” Hardin said. “But we pulled it off. The touchdowns were something to remember for sure, but none of that could have been done without the guys around me. I’m forever grateful for them.”

Hardin’s touchdown reception opened the game’s scoring early in the first quarter, capping New Trier’s nine-play, 87-yard scoring drive. It was the first of five unanswered touchdowns for the Trevians.

New Trier’s Brody Roth kept the momentum going on the next series as he finished off an eight-play, 63-yard scoring drive with a 4-yard touchdown run.

Reaching the end zone in the final game of his Trevians football career was a special moment for Roth, a senior stalwart who led New Trier on both sides of the ball this season.

“It’s always surreal to have the thought it could be the last one ever, especially with this team, and (reaching the end zone) means a lot,” Roth said. “Just to know everything that we have worked hard for is paying off and to have one more shot, it was just awesome.”

Roth finished his stellar year with another memorable night, rushing the ball for 77 yards on just seven attempts. He added 17 receiving yards, taking his contributions to more than 90 yards of offense, all of which occurred in the game’s first half.

After a rushing touchdown from Hardin out of the wildcat formation gave the Trevians a 21-point lead, senior Chase Avery bolstered the lead with two rushing scores. Avery finished off a 59-yard drive with a 10-yard touchdown run and later added a 35-yard score.

Maine West rallied in the game’s second half, scoring 20 consecutive points in the fourth quarter and trimming New Trier’s margin of victory to two scores.

The quick turnaround time to prepare for a new opponent did present challenges, but the Trevians were thankful to take the field, especially given the outcome.

“This team has worked so hard and to have it all pay off is amazing,” Roth said. “Today has been up and down just like our whole season has. We were not thinking we were going to have a game, then (we went) right into it. Everyone immediately hopped on it, and we played our hearts out.”

“Having the whole thing planned, with going to NIU, and just the ups and downs — it reminds me of what this year looks like,” Doll said. “But you just battle through it, you find a way, you come out here and just finish it.”

Although the Trevians will lose several key contributors on both sides of the ball, the team’s coaching staff is excited for what’s to come — but that’s going to come right quick. It is back to the fall in the 2021-22 season.

“But it’s going to be exciting. It’s new for all of us. I don’t know what it’s going to feel like to only have two months off and then start up again but I couldn’t be more excited to be back on the field with these guys in a couple months.”

Doll added that he believes the 5-1 finish will leave a “good taste” in the team’s mouth. He’s also hopeful a new generation of talent is ready to step up.

“I think we will have some excitement with the sophomores coming up,” he said. “There’s some talent there. There’s some really high-end kids that are going to show up and be the new names that you hear about.

“And it kind of reminds me of the great movie, ‘Friday Night Lights,’ when at the end of the movie the coach takes the names off the board and starts putting new names up. And that is the reality. You’re going to have these new kids come in and they are going to start to replace some of these great leaders. But they’ve had role models in front of them that are really special to our program.”

Aside from Roth and Hardin on defense, New Trier was led by seniors like Ryan Rittner, Liam Cummins, Sam Harvey, Max Dancey and Luca Wojewski.

Doll described the departing core of senior talent as a “special group.” Filling the contributions provided by the team’s leaders this year will be no easy task, he said, noting that will present new challenges with a shorter offseason.

“We’ll be ready to go pretty quickly because of the quick transition,” he said. “We know that we have a ton of talent coming back on offense. Most of the offensive line is back, the skill positions are back and our quarterback is returning.”

The Trevians will look to Nevan Cremascoli to guide the offense again next season in what will be his third season on the varsity team. Cremascoli capped 2021 with a big night, passing for 174 yards against the Warriors.

New Trier is also expected to welcome sophomore Graham Mastros to the roster, who Doll described as “really good quarterback” and “another special athlete that is joining” varsity.

Additionally, the team’s offensive line is slated to be a strength, with receivers Alex Mendes and Josh Kirkpatrick, and tight end Finn Cohan all entering their senior seasons next year.

“I think one of the most exciting things right now is we have a pretty good sophomore line and so we already know we have a lot of juniors but now we’re going to get some depth,” Doll said, adding the importance of depth during a longer season will be greater.

“The big thing for us that we’ll be looking for out of the sophomore class and some of the juniors is that we need to recreate the speed,” Doll finished. “You’re not going to replace Brody Roth and you’re not going to replace Tyler Hardin with anybody that I can say will just jump in and do that, but you hope that people can grow into starting to be those types of players.”

By Staff | 19 hours ago
Glencoe, Community