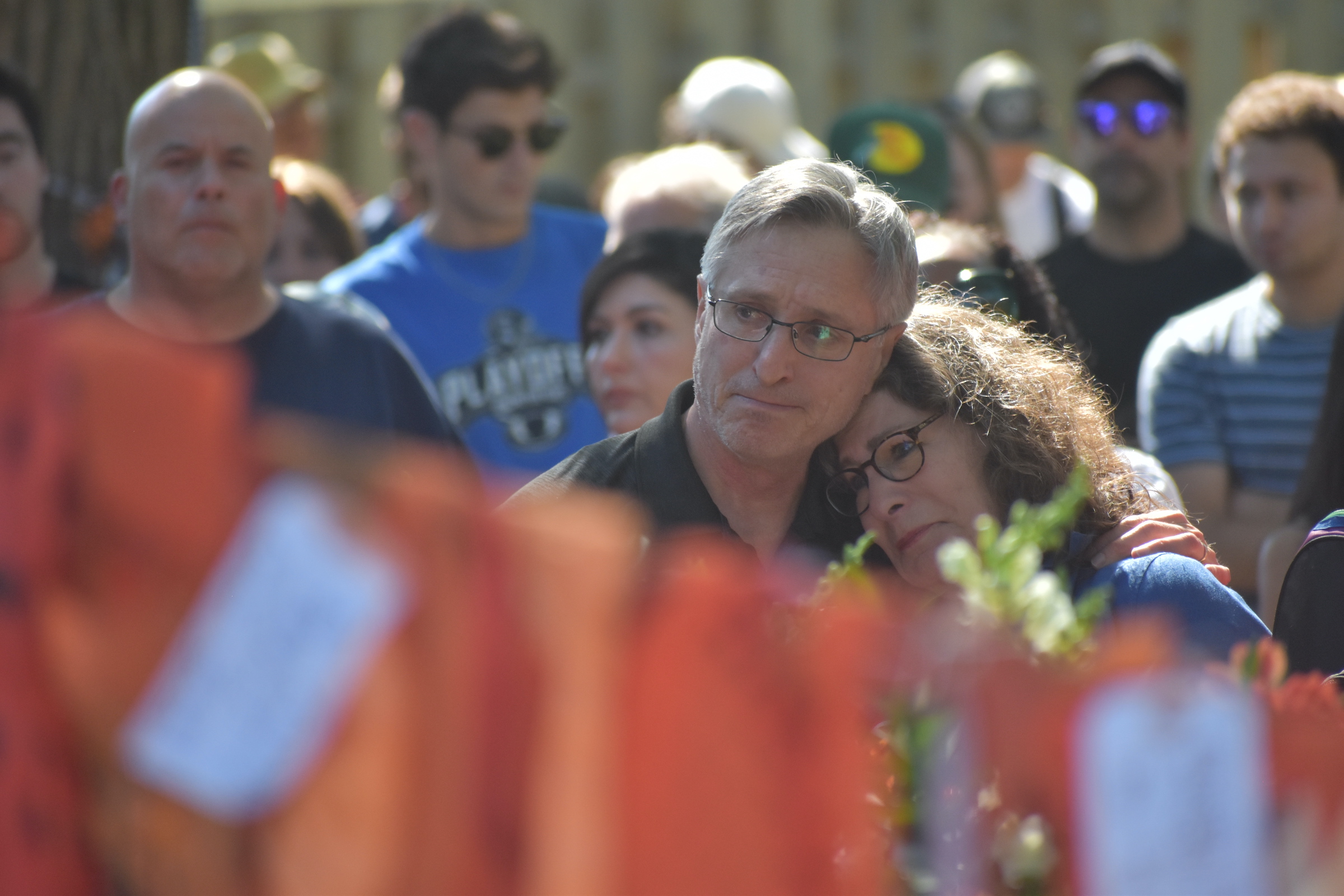 Tied to a rope stretched between two trees is an orange strip of fabric. It represents a recent victim of gun violence.

Participants who arrived early tied more orange strips to the artwork, and as the event began, seven more pieces were ceremoniously added to the project. Each new piece included the name of a person who was killed in the mass shooting on Monday, July 4, during Highland Park’s Independence Day parade.

Just two weeks prior, and nine days before the shooting, von Edelberg’s “Enough” was featured by the Art Center of Highland Park, where event organizers read the names of gun-violence victims during an installation event on June 25.

On Saturday, it was the centerpiece amid more intimate mourning as hundreds of supporters came to the park to honor the victims, comfort each other and demand an end to gun violence.

“This is not normal,” said Rachel Jacoby, the event’s organizer. “I’m here today to remind us that it doesn’t have to be this way. We deserve to live in a country where guns are not the leading cause of death for children.”

Jacoby’s passionate words and pleas were often met with stirring applause, as were those of other speakers, such as elected officials U.S. Rep. Brad Schneider and Lake County State’s Attorney Eric Rinehart and local activists Anthony McIntyre, founder of the Antmound Foundation, out of Lake County.

McIntyre’s organization focuses on getting guns off the streets and he spoke about how gun violence is a problem for all communities. He said no matter where you live, “There is a universal problem of guns being in the hands of people who shouldn’t have them.”

Speakers called for universal background checks for those who wish to purchase a firearm and a ban on assault-style rifles, among other change.

The rally was one of several community gatherings in the wake of the mass shooting.

During each event, residents and neighbors search for answers and healing and ways to contribute to those pursuits. Judi Elman taught at Highland Park High School for 22 years and was at the rally tying orange ribbons. Glencoe residents Allison Shaewitz and her husband, Joey, both grew up in Highland Park and were on hand with signs that called for change. Kate Joyce, of Deerfield, went to school in Highland Park and drew a large heart on the sidewalk in colored chalk along with the words “Hope For #HPSTRONG.”

“I want to do something. I can’t just sit around anymore and pretend it’s OK, because it’s not OK,” Joyce said.

The rally was sponsored in part by March For Our Lives and Moms Demand Action, a national group with chapters in every state and in many communities.

Erinn Martin, of the MDA North Shore group, said the fight for gun control begins at the local level and the community group has already begun its work.

Martin said her organization has been in touch with local school districts and village governments to release information on how to properly and legally store firearms in the home. A letter from the Village of Winnetka went out last week, and Martin expects one from New Trier High School officials this week.

“These conversations need to be had,” she said. “We need to be able to talk about guns in our country.”

On the state and national level, MDA fights for policy and legislative change, and Rep. Schneider and Rinehart made it clear that a ban on assault-style weapons is their priority.

The City of Highland Park will host another community event this week — a vigil at 7 p.m. Wednesday, July 13, at City Hall.