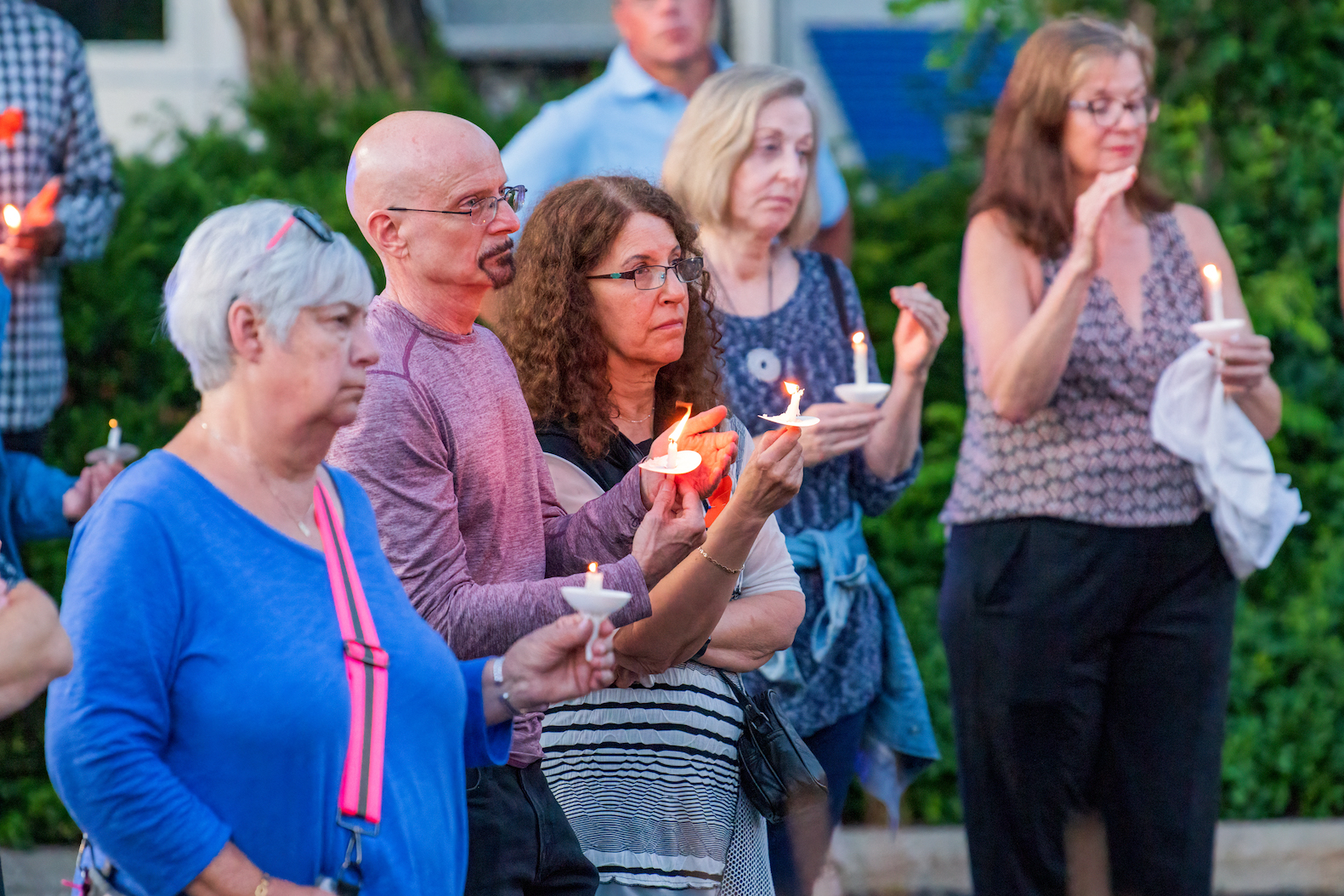 People stand with candles lit Thursday, July 7, in Glencoe to support of the victims and survivors of the mass shooting in Highland Park on the Fourth of July. | photos by gracie atlan/the record north shore

Whether sharing grief and anger or pursuing healing and comfort, or for many all of the above, residents united Thursday evening at Glencoe’s Am Shalom synagogue for a candlelight vigil for the victims and survivors of the Fourth of July mass shooting in Highland Park.

Dozens of attendees heard from members of the Glencoe Clergy Association, Glencoe officials and community members who shared their personal stories from the tragic morning just four days prior.

Rabbi Steve Stark Lowenstein led the affair and shared that three members of the Am Shalom congregation were shot in the attack, which killed seven and injured more than 40 others. At least four of the seven dead reportedly were members of the Jewish community.

“Everything. Everything hurts,” he said. “This is our time to deepen our connection with this community and every community we are in.”

The gatherers stood among seven white chairs. Orange ribbons were tied around the chairs, which were left empty to represent the seven victims of the shooting.

Attendees were given candles, and the Rev. Catrice Kirk — of Glencoe’s St. Paul African Methodist Episcopal Church — asked that each person light their neighbor’s candle to pass along “love, hope, strength.

Kirk said that, “Darkness does not have the final say.”

Rev. Adam Spencer, of St. Elizabeth Episcopal Church, said the candles represent each person’s hearts and hopes and “we are here to help one another to keep our candles alight.”

Roin expressed his anger that “in the United States gun massacres are routine” and that common-sense gun laws must be passed to “prevent the next one.”

“Let’s start with something simple: Let’s ban the assault rifles that murdered our neighbors,” said Roin to rousing applause.

Betsy Brint is the chairperson of the Highland Park Community Foundation and announced the group’s July 4th Highland Park Shooting Response Fund, which is collecting funds to help the victims’ families and survivors of the shooting, as well as the organizations and nonprofits that support their needs following the shooting

The vigil was one of several similar events held across the North Shore in the aftermath of Monday’s tragedy.

On Thursday alone, vigils were held at Central Synagogue in HIghland Park and Winnetka Congregational Church in Wilmette.

A community rally to honor the shooting’s victims and “to demand an end to gun violence” is scheduled for 4 p.m. Saturday, July 9, at Sunset Woods Park, 1801 Sunset Road, in Highland Park.