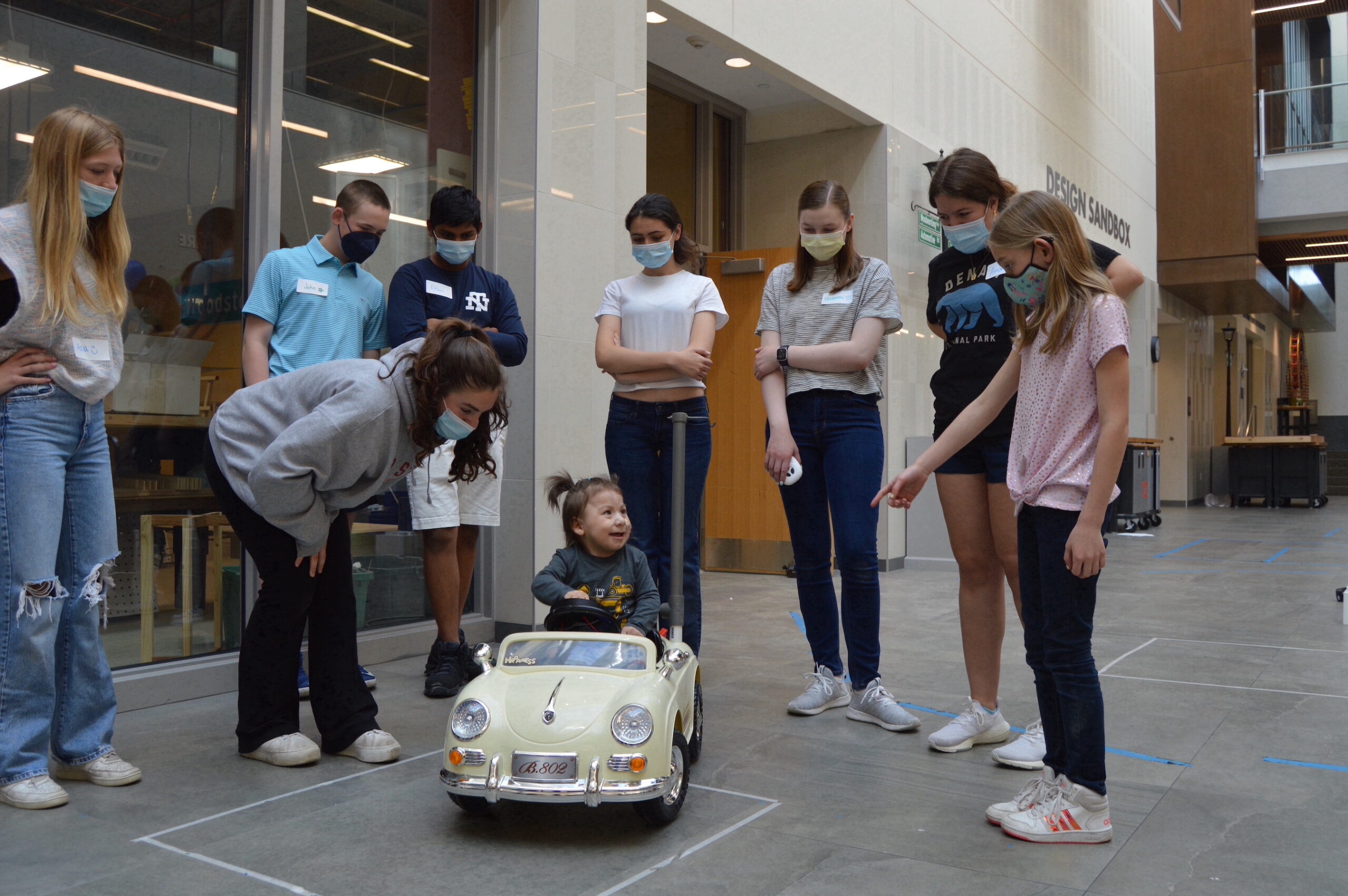 New Trier High School engineering students watch as one of the recipients of the cars takes it for a spin. | Photos Submitted

(Editor’s Note: A previous version of this story incorrectly identified the children’s physical disability. The five recipients of the cars have spina bifida.)

It’s full speed ahead for a group of young children with spina bifida thanks to New Trier engineering students.

The students fixed and adapted small, child-friendly race cars unique to each recipient’s needs through the introduction to engineering class at New Trier High School’s Winnetka and Northfield campuses. The class collaborated with Devices 4 Disabled, the Shirley Ryan Ability Lab and the Illinois Spina Bifida Association on a project called GoBabyGo.

“Students adapted everything from the wiring to adding controls to creating seats that will allow each toddler to sit with posture and fully control the vehicle,” wrote Jason Boumstein, the school’s applied arts department chair, in an email to The Record.

GoBabyGo is a project founded by Cole Galloway at the University of Delaware that tasks community members to build small race cars for children ages 1 to 4 who are mobility disabled and cannot use electric wheelchairs because of their young age.

Students worked on the project throughout the fourth quarter and presented the cars at the GoBabyGo workshop on May 28 at New Trier.

“Teams of three-four students used (computer-aided design) to design, 3D printers to make new buttons and controls, rewired each vehicle so a toddler with spina bifida can operate it, create harnesses, new seating and different components such as feeding tube holders,” Boumstein wrote.

Baumstein told The Record that recent graduate Elizabeth Walther took a leadership role in the project and was “instrumental in communication” between everyone involved.

“Without Elizabeth, this project would have never happened!” he wrote.

Walther worked closely with instructor Nate Silvers, who created electrical schematics and 3D printed many of the essential materials for the cars.

Between Silvers and Walther, plus instructors Devan Castellano, Alex Howe and Chip Finck, and around 160 engineering students, five child-sized race cars were repaired and modified over the course of a few weeks.

“Mr. Silvers took the lead on scheduling the final fitting, working with individual families, scheduling students to be present to make custom adjustments and fixes and … families were able to receive their vehicle and final adjustments,” Boumstein wrote.

Boumstein introduced GoBabyGo to his New Trier colleagues after he saw the program featured on the news.

“We are always looking at a way in applied arts to teach students through authentic, purposeful projects,” he wrote. “Anytime we can do that and make an impact, we try and find a way to develop curriculum around it.”

Though faculty and students played an integral role in the program’s success this year, GoBabyGo would not have been possible at New Trier without funding.

The program was granted a total of $7,500 — $5,000 grant from the New Trier Educational Foundation and $2,500 from a private donation — to fund the program for the 2021-2022 academic year, and New Trier on Thursday, June 16, received a second round of funding — $7,500 — from the educational foundation to continue GoBabyGo next school year

She said the program’s funding year-to-year is dependent on New Trier’s class sizes, but there are hundreds of young children in Illinois waiting on these devices.

Nationwide, more than 40 schools and service groups have adopted the GoBabyGo project. Along with race cars, GoBabyGo also has programs for wearable technology for children and harness systems that help people regain mobility.

New Trier is committed to the GoBabyGo project for the next three years, said Boumstein. Each semester, engineering students will have the opportunity to fix up these cars for a new group of children.

“Our students not only learned engineering principles, they felt the impact and will remember it for the rest of their lives,” Boumstein wrote. “ They made a difference and an impact in the world.”