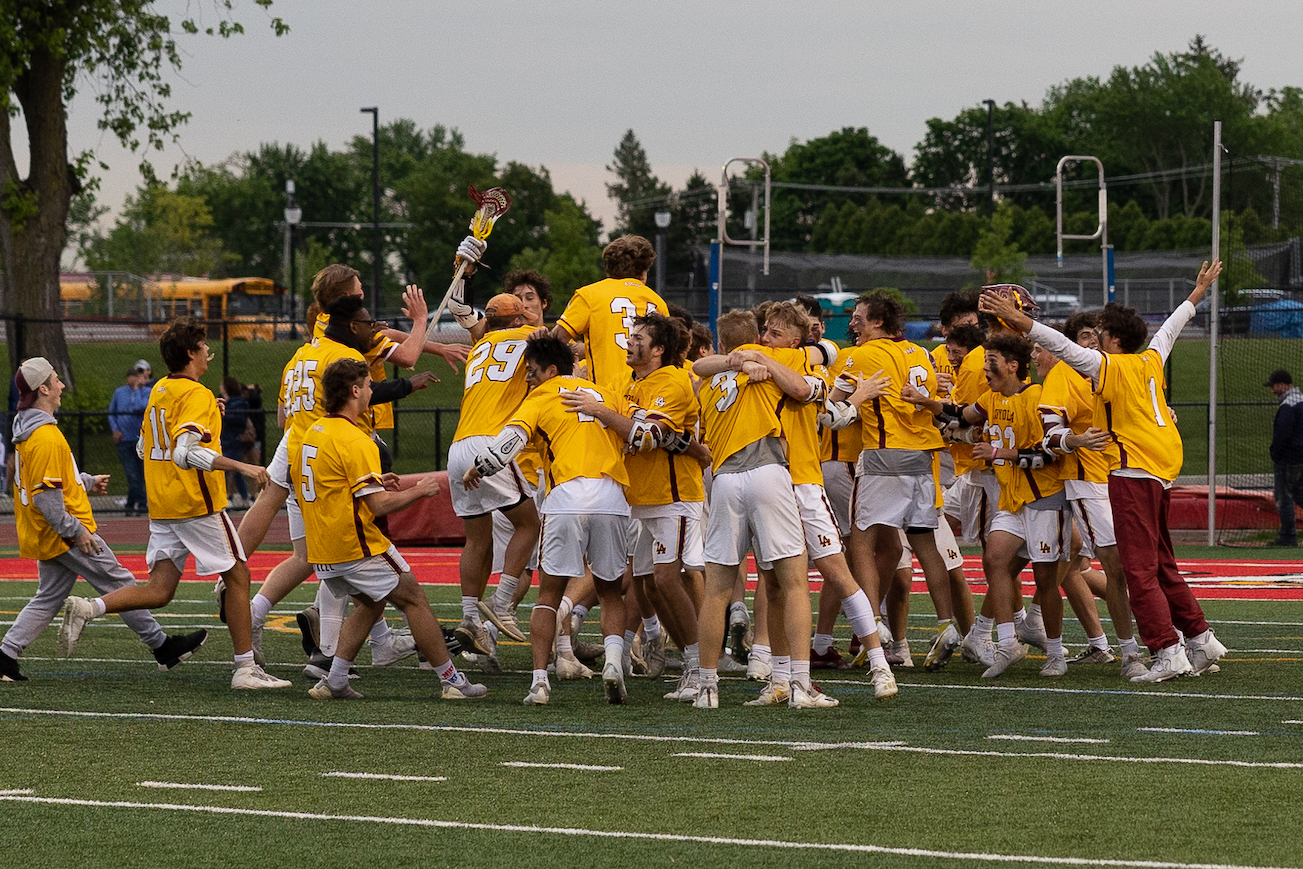 The Ramblers celebrate after the final buzzer of the state championship on Saturday, June 4, at Hinsdale Central. | Photos by Rob Lange/The Record North Shore

Lake Forest is the latest, but maybe greatest, to take its shot.

The Scouts contained the Ramblers for the entirety of the championship bout, allowing just five goals in 43 minutes, but Loyola showed off its championship poise — and All-American — with a game-winner with about 5 minutes to play to best Lake Forest in the title game for the second straight season.

Senior attack Will Maheras, a University of Notre Dame recruit, snuck into a passing lane, received the ball from Bennett Chow and buried it in the back of the net.

“They had covered the pass adjacent to the dodger all game and I sort of realized that they weren’t in the skip lane,” Maheras said. “I was just trying to stay in between all the guys there.”

The Ramblers defense — which led by goalie Alex Feuer was a force all postseason, giving up 4.3 goals per game in the state series — protected the 6-5 lead to bring home another state championship, Loyola’s third in four years of IHSA state finals (2019 won by New Trier).

Though it wasn’t as simple as scoring late. Loyola had to fight back from a second-half deficit.

With goals from Maheras, Connor Ditomasso and Cheyne Repp, Loyola got out to a 3-1 lead in the first period but it was short lived. The Scouts evened the score by halftime and held the Ramblers scoreless for more than two full quarters — much of the time with Maheras on the sidelines nursing an ankle injury.

Lake Forest, however, scored twice in the third to nab a 5-3 lead, to put Loyola in trouble.

At the end of the third, Loyola got a bounce and Easton Bello buried the fourth goal. Then, early in the fourth quarter, Sean Cronin scored to tie things up with 8 minute 30 seconds to play.

A couple minutes later, Maheras — who said he was mostly a decoy — broke free and gave his team the 6-5 lead.

The victory capped off a 20-3 season for the Ramblers, whose only losses came to out-of-state teams.

Maheras said the title run was special in numerous ways, including because Loyola fought off injuries and illnesses to key players all season. But most importantly, Maheras got to celebrate his final game with teammates he’s been playing with for years.

“It was awesome,” he said. “I’ve been playing with those guys since fifth or sixth grade and it’s a great way to go out, especially against the same team back-to-back years.”