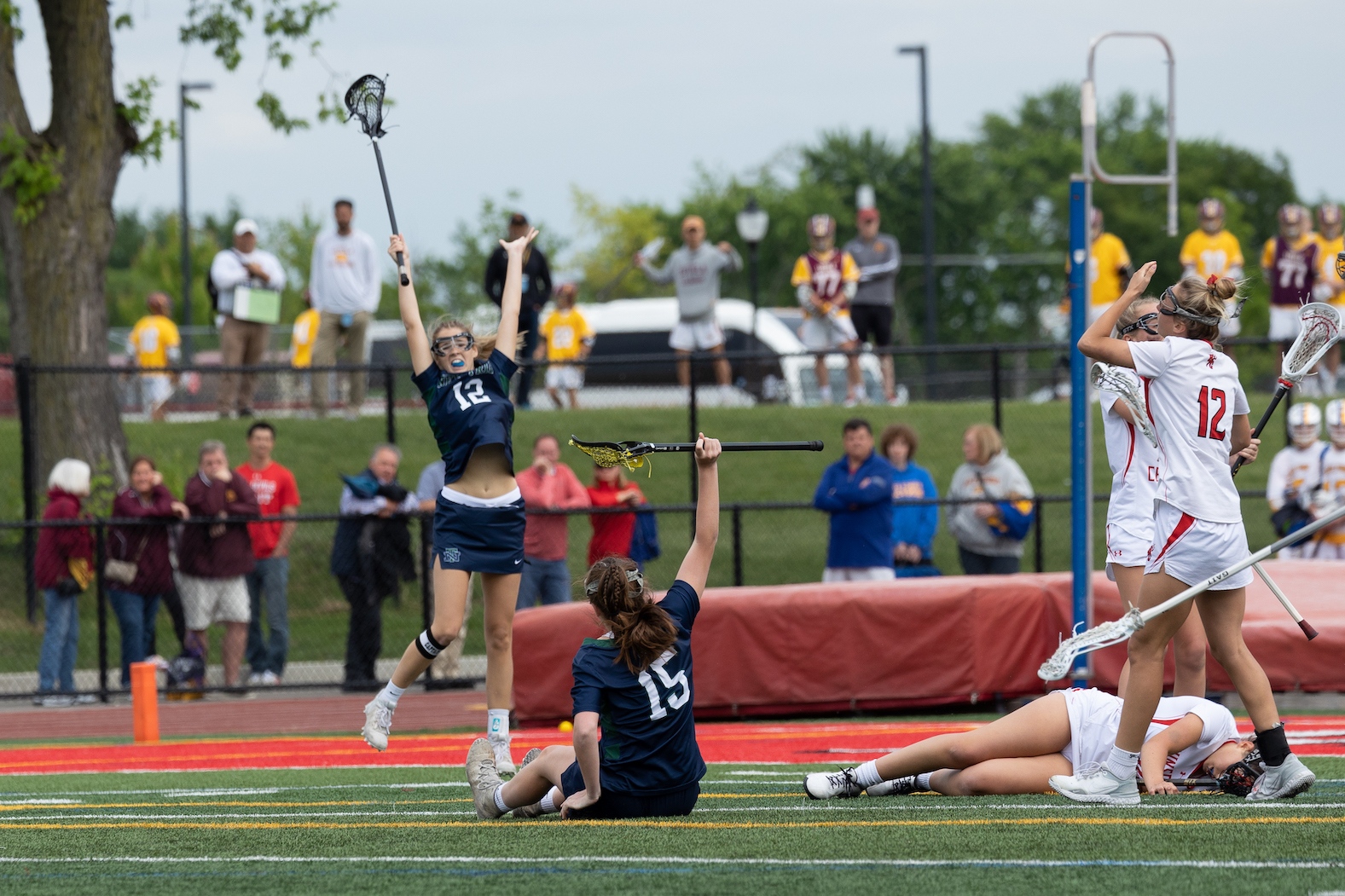 Sports love statistics, and lacrosse is no different.

New Trier coach Pete Collins and company track performance in numerous categories — they even created new categories — but one of his team’s biggest assets is more difficult to measure.

Call it the “will to win” or “want” or “grit” or whatever you’d like, but the Trevians showed it off in the biggest moment of the season — overcoming a five-goal deficit and then fending off Hinsdale Central with a 12-11 overtime victory in the IHSA championship Saturday, June 4, in Hinsdale.

“Our kids dug deep and said, ‘OK, why are you playing?'” Collins said. “You gotta believe in yourself. We made a few adjustments here and there but that it started by understanding what it’s going to take.

“It wasn’t about winning the game, because both teams were playing to win, but it was more about, ‘Did you leave it on the field?’ There are going to be ups and downs; you better respond to it.”

The Trevians scored six unanswered goals to flip a 9-4 deficit last in the first half to a 11-10 advantage with eight minutes to go in the game. Brooke Ross had three of the goals, and Kennedy Meier had the go-ahead tally.

Hinsdale Central answered to force a sudden-death overtime, and New Trier was ready.

“(Assistant coach Charlotte McGuire) put in this offense and knew it might not be the first look or the second look,” Collins said. “It was an end-of-the-game, emotion play, and sure enough it wasn’t the first, second, third or fourth look. It was the fifth look. And that’s all about being patient and poised and trusting each other. And it worked. It was a great look.”

Meier won the draw, and the ball eventually got on the stick of Trevs star Grace Curry, who ripped a shot into the back of net to hand New Trier a state championship — its second in three seasons and seventh overall.

Collins was named the state’s coach of the year by the Illinois Girls Lacrosse Coaches Association, but gave credit to his assistants, like McGuire (offense) and Carli Harpel (defense/draws) for setting the team up for success in the season’s biggest moment.

“Give credit to our coaches and our kids; they made the adjustments,” he said. “We had a Zoom call with coaches before the game. We just went thru what we’d do about injuries, what we’d we do if we’re down, if we’re up. I don’t think there’s any surprises to the kids. We don’t stop playing how we play. They just believed.”

To get the championship game, the Trevians downed arch rival Loyola Academy in the sectional final, before besting Hersey and Lincoln-Way (co-op) prior to the title game.

The Trevians had seven All-State selections Ross, Meier, Audrey Rudolph and Lily Wallace on the first team; and Emma Curry, Grace Curry and Addie Shevitz on the second team.