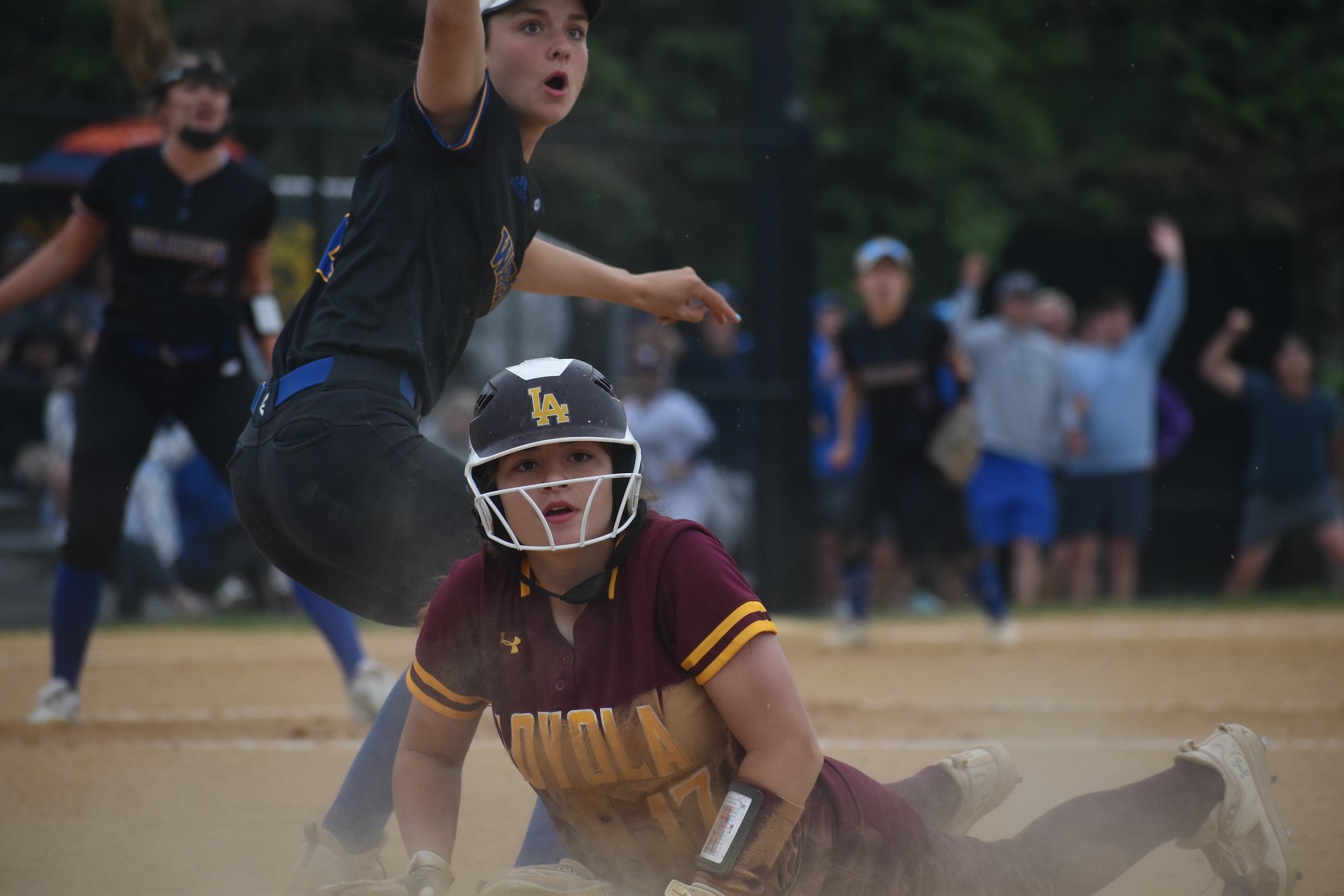 Loyola's Emilia Bartholomew slides back into first base on a pickoff attempt Saturday, June 4, in the sectional championship. | Photos by Joe Coughlin/The Record North Shore

Coach Leah Herlocker was confident that her Ramblers would score if their next at-bat. But it never came.

Instead, Warren hitters finally found success at the plate in extra innings of a classic pitchers’ duel between Loyola’s Mackenzie Barry and Warren’s Sydney Jackson.

With two outs in the eighth inning, Hailey Conger doubled off the wall and after a hit by pitch, her sister Hannah Conger bounced a single up the middle to bring around the game-winner in the Blue Devils’ 2-1 sectional-championship victory Saturday, June 4, at Glenbrook North.

“It honestly came down to who the home team was,” Herlocker said. “They were always going to get another chance after us. I bet if we had another half-inning we score.”

Known as a hard-hitting unit, the No. 3 Blue Devils averaged a startling 14 runs per game in their previous three postseason victories — all shutouts. Behind the arm of Barry, the No. 6 Ramblers also recorded three shutout victories to set up the sectional-title matchup.

Barry and Jackson matched each other all afternoon Saturday. Barry finished with 16 strikeouts, giving up five hits — four in the final two innings — and two runs. Jackson struck out 10, while serving up just four hits, three of which came in Loyola’s sixth inning.

“They are a phenomenal team. They have great hitters. The other pitcher kept us on our toes,” Barry said. “We weren’t able to score as many as we hoped, but it was just a pitcher’s duel the whole time. Both teams played amazing. It was going to come down to whoever could score a run.”

The Blue Devils tallied first, plating a run on a walk, sacrifice bunt and the game’s first hit — a single to right field by Hannah Conger that scored her sister Hailey — in the fourth inning.

Loyola fought back two innings later. With two outs, the Ramblers strung together three straight singles — Emilia Bartholomew, Lily Moran and Barry — to even the score.

Both teams threatened, Warren in the seventh and Loyola in the eighth, but couldn’t punch home the go-ahead run until the Congers again provide the heroics.

Despite a near .500 record-season record, the Ramblers advanced to the sectional championship for the first time since they won a state championship in 2009. Along the way, Loyola won its first regional in nine seasons, last earning the title in 2012 — all of this in Herlocker’s first season at the helm.

Guiding the Ramblers the entire way was the senior star Barry, who upped her game even further in the postseason. The Northern Illinois commit struck out 52 batters and allowed just seven hits in her final 23 high school innings pitched — all three victories.

She also knocked in Ramblers’ lone run in both sectional games, which included a 1-0, eight-inning win over top seed Buffalo Grove on Tuesday, May 31.

“She’s one of the best athletes (I and asst. coach Irene Margiotta) ever seen play this game,” Herlocker said. “She has every part of it. … She’s as bad as it gets. She pitches fearlessly. She steps to the plate fearlessly. I’ve never seen anyone play like that.”

Though Barry will be competing at college, she will be near by at Northern Illinois University in DeKalb. And with so many of her Loyola teammates coming back to the roster, she plans to catch as many Ramblers games as she can.

“This team has been closer than any of the four years,” Barry said. “The friendships and relationships I’ve grown this year it’s going to be hard not to come back next year playing with these girls again.”

One town south in Glenview, the Ramblers baseball team was simultaneously battling for a sectional championship.

Loyola, the sectional’s third seed, picked up victories over Maine West, Elk Grove and Evanston to make the title game, while the No. 8 Titans took down top-seeded Maine South and No. 4 Glenbrook North.

Facing a 2-0 deficit in the seventh, the Ramblers rallied. A sacrifice fly by Connor Lasch got Loyola on the board, and Max Sawyer sent the game to extra innings with an RBI single.

In the first extra inning, the Titans continued their postseason magic, scoring twice and holding off the Ramblers last gasp.