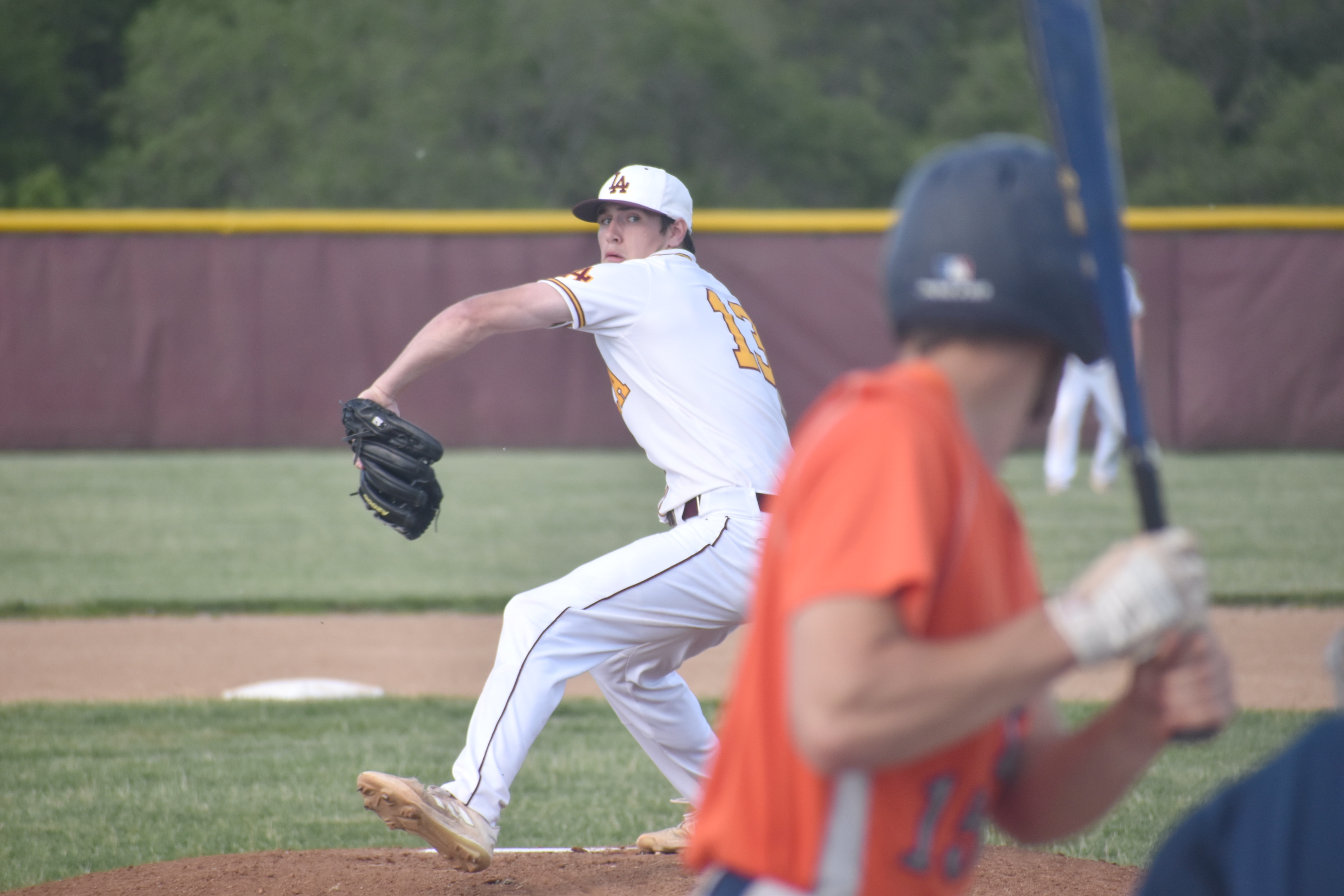 Roger Simon winds up for a delivery in the sectional matchup with Evanston Thursday, June 2, in Glenview. | Photos by Joe Coughlin/The Record North Shore

Loyola Academy ace Roger Simon pitched into the final inning against Evanston Thursday evening, June 2, without surrendering a hit. When he did, a line-drive single by Brandon Borkowski, he just kept pitching.

“I didn’t really care about that. I wasn’t thinking about (the no-hitter),” Simon said. “I realized after I gave up the hit and everybody was clapping. … But I don’t care about those things I just want to win games.”

Mission accomplished on that front, as Simon’s performance on both sides of the diamond sparked a 5-0 Ramblers’ victory in the sectional showdown at Loyola’s Munz Campus in Glenview.

Simon earned the victory by pitching 6 2/3 innings and striking out eight Wildkits to go with five walks and just the one hit. Michael Southard recorded the final out for Loyola.

It was the second straight postseason win for Simon, who also went 6-plus innings on Saturday, May 28, when he struck out 14 in a 2-1 win over Elk Grove.

“He is an absolute bulldog,” Ramblers coach Josh Howard said of Simon. “He threw 115 (pitches) on Saturday and we had to go back to him, and he went to 115 again. We needed every one of them. He’s a competitor and he wanted the ball and we couldn’t take it from him. I’m incredibly proud of these guys, i’m incredibly proud of him.”

The senior got his team on the board in the third inning. He was hit by a pitch, stole second and advanced to third on a wild pitch. Then, as the catcher lobbed the ball back to the pitcher, Simon swiped home for the game’s first run.

“As he goes, we go,” Howard said. “He’s the straw that stirs the drink. You love what he brings to the table, everywhere you put him.”

Evanston ace Hank Liss was equally impressive through four innings, as he struck out eight Ramblers while not allowing a hit.

“After the first couple innings, we started settling down in the box, telling each other what we see,” Simon said of hitting against Liss. “He’s a really good pitcher so we were just trying to put the ball in play and make him throw a lot of pitches.”

After Liss was removed from the game, Ramblers senior Haden Kriston bounced a two-run single up the middle, and Loyola grabbed a 4-0 lead.

“Hank Liss is an outstanding baseball player. All credit to him,” Howard said. “We were just grinding at-bats out and trying to work his pitch count. We were fortunate he came out of the game in the fifth. He’s a heck of a player.”

The four runs were more than enough for Simon and the Ramblers, who tacked on one more on a Kriston sacrifice fly.

The win over Evanston, the sectional’s No. 2 seed, was Loyola’s fifth victory in the row, including playoff wins against Maine West (11-1) and Elk Grove (2-1) in regional play. The No. 3 Ramblers advance to take on No. 8 Glenbrook South — which is coming off wins against No. 1 Maine South and No. 4 Glenbrook North — at 11 a.m. on Saturday, June 4, at the Munz Campus.

“I think this is who we are,” Howard said of his team’s recent play. “The (Chicago Catholic League) prepares us for stuff like this. It’s an unbelievable conference, but it sets you up to be ultra competitive in the postseason, which we’re seeing that we are. We are one of the best teams in the state, i think, when we play our baseball.”