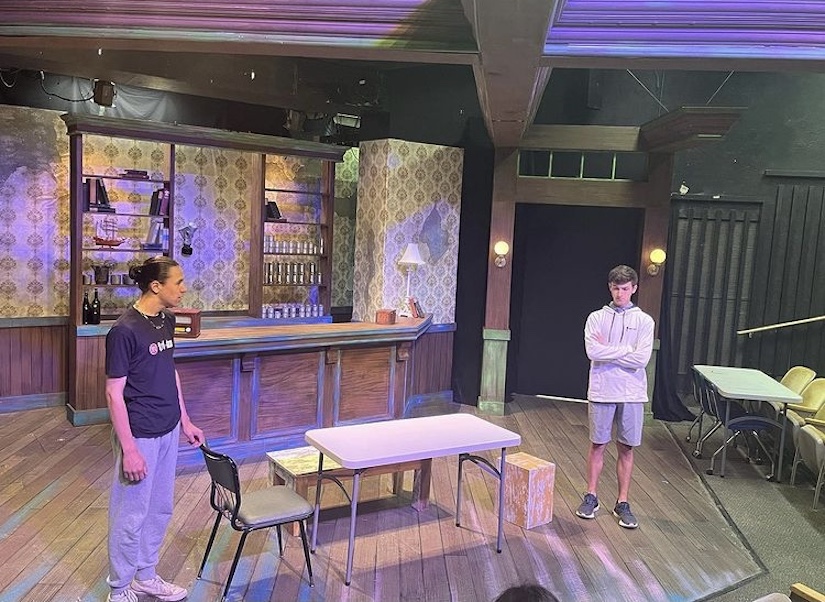 Glencoe resident Trenton Rothbard was dissatisfied with the way mental health is portrayed both in media and the real world, so he did something about it.

The result is “Nuclear Family,” a three-act play that Rothbard wrote about a dysfunctional family in a nuclear bunker during the Cold War. The play explores mental health, among other topics.

The 2022 New Trier High School graduate is directing and producing the show, which runs from Friday-Sunday, June 3-5, at Citadel Theatre in Lake Forest.

“There are so many apocalypse movies, and I wanted to show a little more intimate look at that,” Rothbard said.

The production of “Nuclear Family” is over two years in the making. With the goal to stage a show, Rothbard set out in 2020 to find a venue and chose Citadel for its intimate space and accommodating set.

Delayed by COVID-19, Rothbard began fundraising for the production by working as a patio busser for Hometown Coffee and Juice in Glencoe, clocking thousands of steps in the expansive outdoor section in oppressive summer heat, knowing that every penny earned would form the play’s budget.

While initially Rothbard did not expect to write his own play, inspiration for “Nuclear Family”struck from a seemingly unlikely place: the animated Netflix show “BoJack Horseman.” Rothbard’s favorite series, the show deftly and surprisingly delves into mental health issues.

“In watching the show, I was greatly affected,” Rothbard said. “It put a lot of things into words that I never had words for before. I felt when I was watching that show that I wanted to do everything I could to create that for another person.”

Once the script for “Nuclear Family” was finished, Rothbard began the casting process, reaching out to actors he knew from previous productions, many of whom are New Trier upperclassmen. Rehearsals started on weekends a few months ago, and within the past few weeks have increased to every day.

The show has a technical director who operates lighting and sound, but all other aspects of the show — props, costuming, blocking and so forth — are handled by Rothbard.

“I’m really happy with where the show is now. I’m personally really proud of it,” he said.

While this production may be Rothbard’s most demanding one yet, it is far from his first. He began acting in fourth grade when his mother pushed him to join a local theater group, and since that time has taken part in every production possible.

“Without fail, every cast I’ve ever been in has been really close. That was initially what kept me coming back,” he said.

Over time, Rothbard has been increasingly drawn to the art of performing, telling stories and engaging an audience. This fall, he is set to attend California Institute of Arts, where he will work toward an acting degree.

His passion may be taking him across the country soon, but Rothbard recognizes his hometown’s strong influence on him.

“I think there is something really amazing about the programs that the North Shore has to offer,” he said.

Broadway Bound, the Glencoe Junior High Project and New Trier’s performing arts department are just some of the organizations Rothbard credits with his theater development.

Proceeds from “Nuclear Family”go to the National Alliance on Mental Health for their work in destigmatizing and treating mental illness. The donation goal of $1,000 has already been reached thanks to a combination of ticket sales and direct donations, but tickets and donation opportunities are still available here.