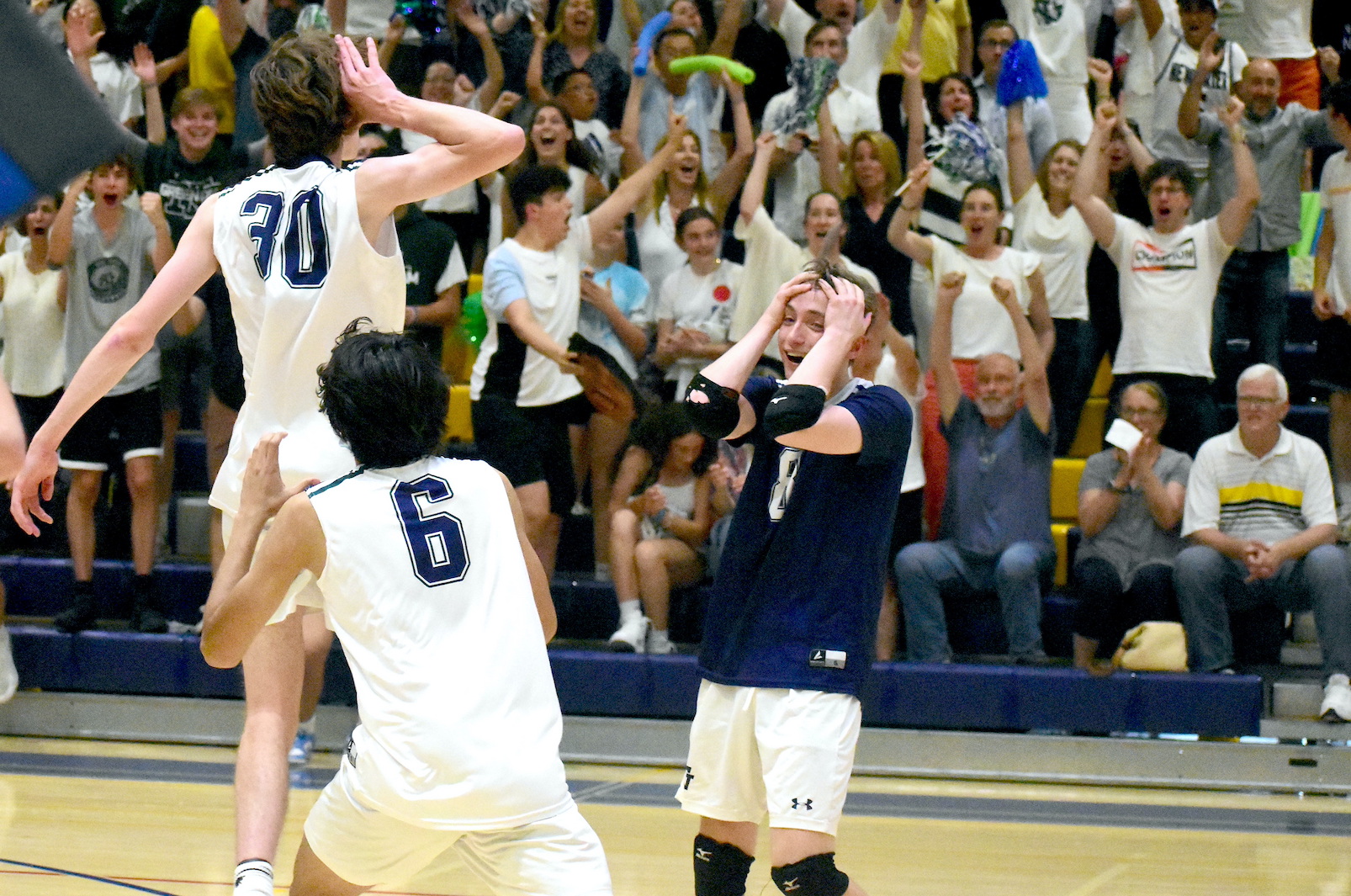 Mistakes are normal in volleyball. It’s why the sport is often called a game of errors.

Playing through those errors is part of the game — a lesson put into practice by New Trier on a big stage Tuesday night.

“Here’s the thing, you don’t have to play well every point in volleyball,” Trevians coach Sue Ellen Haak said. “You just have to keep fighting and clawing at it. And that’s what I thought a lot of our players did. We had highs and lows throughout the match, but they just kept on playing.”

Glenbrook North trounced New Trier 25-12 in the first set of the IHSA Glenbrook South Sectional championship, but the Trevs responded with back-to-back hard-fought victories, 25-22, 25-23, to claim the match.

In the final set, the Trevians fended off comeback after comeback from the Spartans, the reigning state champions. With New Trier leading 24-23, Glenbrook North got an open look at a game-tying kill, but Connor Durst’s rocket attempt was dug by Will Hopkins and set to David Wolff in the back row.

The 6-foot-8 Wolff, who had some uncharacteristic swings earlier in the match, fired off a sectional-clinching kill just in front of the Spartans’ back line.

“I didn’t have a great start to the game, but I didn’t let that get to me,” said Wolff, a sophomore. “I heard the fans from GBN chirping at me, but I used that as fuel. I like stepping up in big games. … I still felt like I wanted the ball in my hands and I wanted to make that last kill. I know my coaches and teammates trusted me.”

The final play would not have been possible but for the remarkable dig by Hopkins, the Trevians senior libero, who Haak said always finds himself in the right place at the right time.

“Our libero digs the most unbelievable shots,” she said. “His reaction time and his passing form is like volleyball-magazine material.”

The Spartans powered through the Trevs, finishing the game on a 17-6 run primarily led by star outside hitters Durst and Paul Wyszynski.

“We just weren’t siding out,” Haak said. “That’s something we do well, so it wasn’t so much a concern long term but we had gotten ourselves in such a big hole.”

Glenbrook North was also feeding off its crowd and stringing together points in no time.

Haak played a card or two of her own from the bench, subbing players between points and calling early timeouts to disrupt the rhythm of the Spartans potent servers.

Haak said normally she would hesitate to enter reserves in a big playoff match, but depth and versatility are two Trevians strengths this season.

The Trevians also tightened up their defense in the second set while getting off to a 9-5 lead after a Shane Sullivan ace.

The Spartans never went away, however, evening taking a lead at 19-18, but the Trevs got three straight points to force a decisive third set.

“Once we started getting the momentum in the second set they started to crumble and we pounced on that,” senior middle Nathan Zoloto (team-high 8 kills) said. “They were on their heels since halfway through the second set.”

In the final game, New Trier was in trouble early, down 8-5 and then 13-10, but often rallies would end with a Glenbrook North hitting error, either long or wide. A 7-1 burst from the Trevs put them in the driver’s seat at 17-14.

Again, though, the Spartans hung in there and battled to a tie at 22-22. New Trier got the ball back after a service error, Wolff followed with an ace and, a point later, the decisive kill.

“It feels great,” Wolff said. “Throughout the season, we knew we were the top two teams in the conference. This was the ultimate stage and I’m just proud of my whole team.”