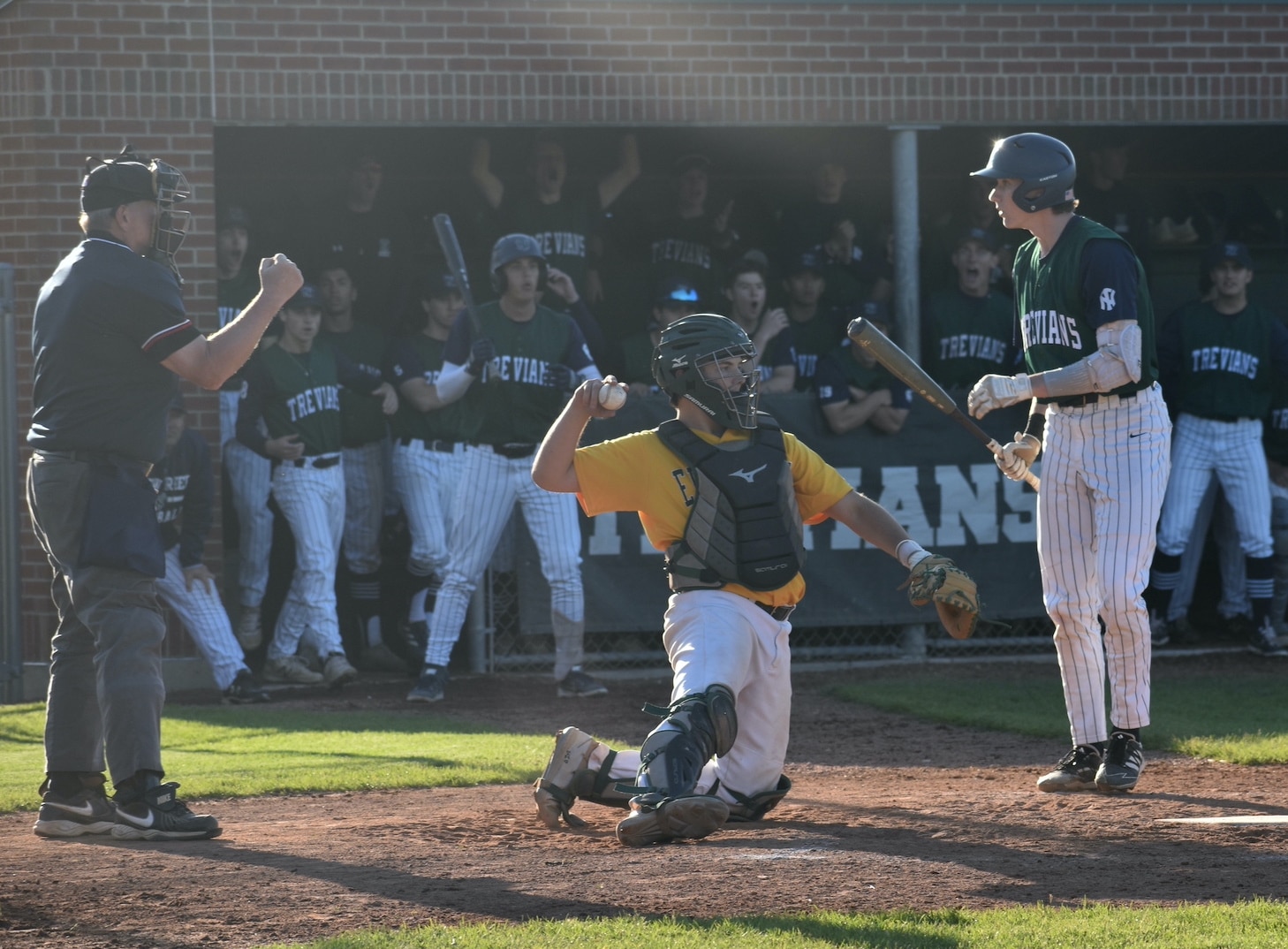 New Trier's Dylan Mayer is surprised by a strike call during the Trevs 5-4 regional loss Friday, May 27, in Winnetka. | Photos by Joe Coughlin/The Record North Shore

Every time it looked like New Trier baseball was turning a corner, the Trevians would walk it back.

The trend continued in their playoff opener Friday, May 27, when No. 6 New Trier squandered a 4-1 lead and eventually fell 5-4 to No. 11 Elk Grove at Duke Childs Field in Winnetka.

The Trevs entered the postseason on a three-game winning streak to push their record to .500, but the loss dropped them back below the mark at 16-17, the first losing season in coach Mike Napoleon’s storied career.

According to IHSA’s digital archives, New Trier baseball has never before finished with a losing record.

“We lost 17 games this year. That’s a big number, for New Trier especially,” Napoleon said. “Being 16-17, that’s just not going to cut it. It’s the worst record I’ve had as a coach. We’ve got to put things together earlier in the season and not rest on the name across our jerseys. We got to go out and play.”

The opening-round exit stands in stark contrast to New Trier’s unlikely run just one season ago, when as the sectional’s fourth seed the Trevs won four straight to advance to state’s final eight.

With a handful of position players and a couple pitchers returning, New Trier had hopes for a dynamic season, even ending team huddles by yelling “Joliet” — the location of the state final four.

“Hopefully these guys get a little fire under their butt and realize how bad it is to end this way and get ready for next year,” Napoleon said.

A 1-1 game in the fourth inning, the Trevians plated three runs courtesy of a two-run double by senior Louis Florida and an RBI single by Dylan Mayer.

The lead did not last long, however. The Grenadiers answered right back with three of their own in the fifth. Elk Grove senior Jaden Alberson, also his team’s starting pitcher, roped a two-run triple to right-center field before scoring on a single.

New Trier failed to score the rest of the way, stranding three runners in the fifth and two more in the sixth.

“We have to do something with that,” Napoleon said. “ … We have to do a little bit of a better job, but that’s kind of what we didn’t do during the season. We just have to do better.”

Napoleon added that he would have liked to see more of his right-handers looking to hit the ball to the opposite field — an approach taken by Alberson and Elk Grove.

In the seventh, Alberson struck again — this time with a double to right-center gap. On a Mitch Janczak single, Alberson raced home ahead of the throw to score the eventual game-winning run.

“My first two at-bats, I went 0-2 and was just looking to put the ball in play and hit the ball to the opposite field,” Alberson said. “ … I was just hungry for a hit.

“It felt good to beat New Trier. There’s no better feeling. I can’t even explain it. … (We will) cherish this moment for the rest of our lives.”

The Trevians went 1-2-3 in the seventh; however, missed a game-tying home run by about a foot when Louis Florida went the inning’s first pitch over the right-field wall just outside the foul pole.

After a strikeout for the third out, the Grenadiers stormed Duke Childs Field.

On top of that, Napoleon praised the program’s lower levels.