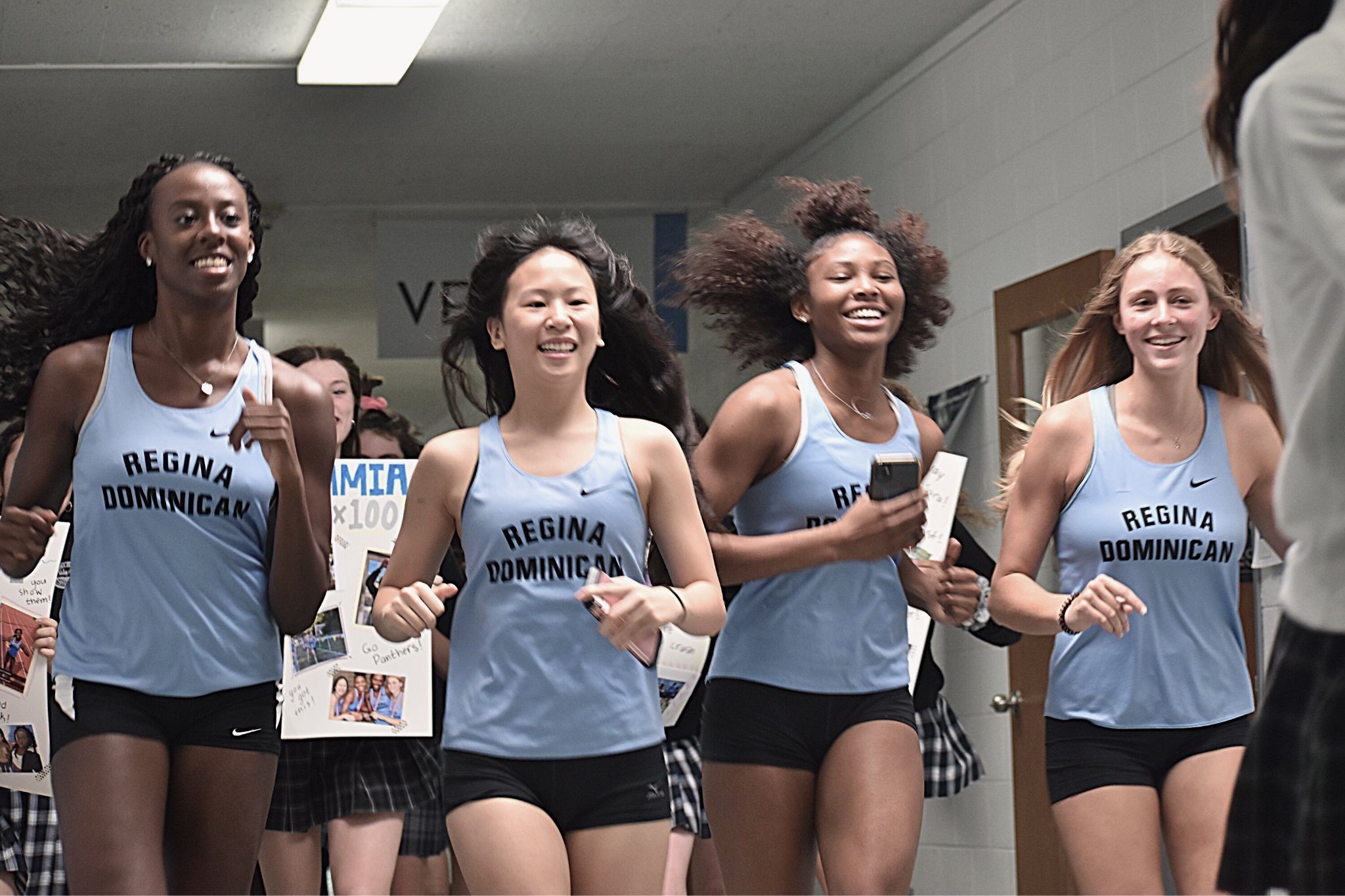 When Regina Dominican sprinters line up against opponents, they see more than friendly competition.

They see a challenge.

“We’re such a small school and an all-girls school; sometimes we can be underestimated,” Panthers junior Kendall Williams said. “So when we see that competition we have to show them that we’re just as good as them or even better.”

Williams and the other three members of the Panthers sprint relays took over the school’s record books this season, setting five school records between the four of them. The foursome was celebrated by their classmates Thursday, May 19, at the Wilmette school, where they ran through the hallways with their supporters.

The squad — Williams, junior Haneefa Adam, senior Tamia Quach and sophomore Sara Byrne — also finished at the top of the Girls Catholic Athletic Conference White Division and the IHSA Class 2A Carmel Sectional in the 4-by-100 relay, and during the season, clocked faster times than many bigger and more renowned programs, including Loyola Academy and New Trier.

With a sectional finish of 50.86 seconds, the quartet broke their own school record (51.96) set just a few days earlier at the GCAC championships.

“We couldn’t believe it when we shaved a second off our time (at conference), because we had better competition than we usually do,” Adam said. “And then at sectionals, we shaved another second off within five days. It was really crazy that we did that.”

The sectional time was also more than 2 seconds faster than their 2021 sectional finish (53.19), which was just shy of the state standard.

Coach Scott Bohlke said the foursome gained another year of trust, confidence and camaraderie — invaluable traits for a sprint relay, he said.

“They trust themselves. They trust each other and none of this is too big for them,” he said. “They are not intimidated.”

The four sprinters also ran together in the 4-by-200 relay this season and hold the school record in that event as well. The relay finished third in the sectional meet with a time of 1 minute 47.74 seconds, a drop of nearly nine seconds from their conference-finals time (1:56.47, 3rd).

Adam, who is also a standout volleyball player and dancer at Regina, began jumping for the first time this season. Midseason, Bohlke told Adam that he was going to enter her in the triple jump. The rest is literally Regina history.

Adam went on to an All-State performance in Charleston, placing fifth in IHSA Class 2A, and she made sure to thank coach … coach Sara.

“She taught me,” Adam said of her relay teammate Sara Byrne, who is also a triple jumper.

Coming off a broken bone in her foot, Williams — who is also a basketball player for the Panthers — wasn’t going to try the long jump this season. But she did, and at the sectional, with her final jump she set the school record at 5.23 meters, or 17 feet, 1 3/4 inches.

“I had a feeling it was gonna be a good one,” she said. “I basically threw myself in the pit and they said I qualified for state.”

While you can expect more from Regina’s sprinters in the future, there will be one open spot on the relays next season.

Quach, of Chicago, is off to DePaul University, where she hope to study economics among other things. The senior also played basketball and ran cross country for the Panthers, and she teared up when talking about her special relay-mates, who joked about ways to keep Quach enrolled at Regina.