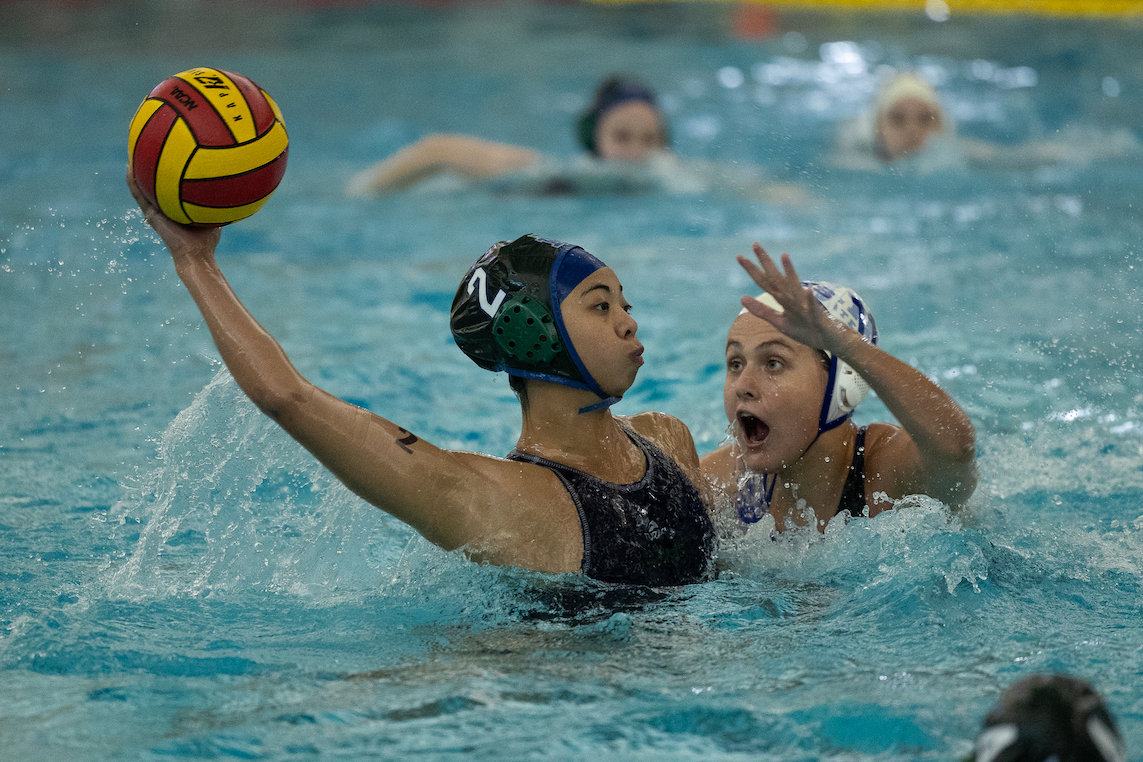 New Trier junior Charlize Escasa winds up for a shot attempt in the third-place game Saturday, May 21, during the IHSA championships at Stevenson High School. | Photos by Rob Lange/The Record North Shore

The comeback kids ran out of comebacks.

New Trier girls water polo made waves when it upended top-seeded Evanston in the sectional finale Saturday, May 14, and then turned a 6-2 deficit into a 9-6 victory against Lane Tech in the state quarterfinals Friday, May 20, to guarantee a trophy finish.

In the semifinal round, however, New Trier passed its magic to Stevenson, which overcame a 4-2 Trevians’ lead to win 9-6 Saturday morning, May 21, and eliminate the Trevs from title contention.

“I don’t know whether we just ran out of steam or what,” New Trier coach Matt Wendt said, “but Stevenson reacted quickly on a couple turnovers and shots and just outswam us for some late goals. … Kind of a reversal of what happened in the quarterfinal game.”

In the third-place contest, New Trier dropped a 12-11 result to Lyons and took home a fourth-place trophy.

It is the program’s third straight final-four finish (3rd in 2021, 4th in 2019 — no season or tournament in due to COVID-19), and fifth state trophy in program history.

Wendt credited his team’s resiliency, especially in topping the rival Wildkits after losing three times to them in the regular season.

“We are so thankful to get in trophy position,” Wendt said. “We were the second seed at sectionals. … This is the comeback team this year. We lost to Evanston three times this year and then beat them 9-5 in the sectional final — by four goals. Huge leap in our quality of play. Huge leap.

“We lost by two goals in (the conference tournament) on May 7 and came back and beat them by four goals on May 14. That’s a six-goal swing in one week.”

Keying the victory, Wendt said, was a focus on perimeter shooting, an adjustment New Trier made based on the regular-season matchups with Evanston.

The victory propelled the Trevs to the state finals at Stevenson High School, where Lane Tech quickly bottled up the Trevians’ magic.

Against a shorthanded New Trier without three players because of illness, Lane extended a 3-1 halftime lead to 6-3 to start the third quarter. Then, the Trevs’ magic reappeared.

New Trier finished the game on a 7-0 run, highlighted by a big-time effort inside by Sophia Iskowich.

The Trevs’ leading scorer Seren Uzkan took care of a lot of the work from there, scoring three goals in the match, while freshman Rosie Woodman added two goals.

All the while, the New Trier defense contained Lane star Martha Palmentera-Reid, who scored three goals in the match and more than 100 goals on the season. Wendt also credited his goalie Elise Chiang, who he said just recently started playing water polo.

“We threw the whole team at (Palmentera-Reid) so by the fourth quarter she was exhausted,” he said. “We pushed her to the outside and she couldn’t get anything close to the goal.”

As if the stress of a competitive state finals was not enough, coach Wendt had family business as well.

His daughter, Emma, was playing in her final state tournament with the Trevians and his son, Noah, was helping lead the boys team to its first state championship.

On Saturday, May 21, Emma scored three goals and had four assists in the dramatic third-place contest, and afterward, Noah Wendt led the Trevians with five goals, including multiple penalty-shot conversions, in the title game.

“It was stressful,” coach Wendt said. “I could barely watch my son, Noah, taking penalty shots; in fact, I didn’t. I was so nervous. It was an exciting game to watch. They both played very well and it was a very special moment in the Wednt household for sure. (May 21) was very special. I am very thankful.”