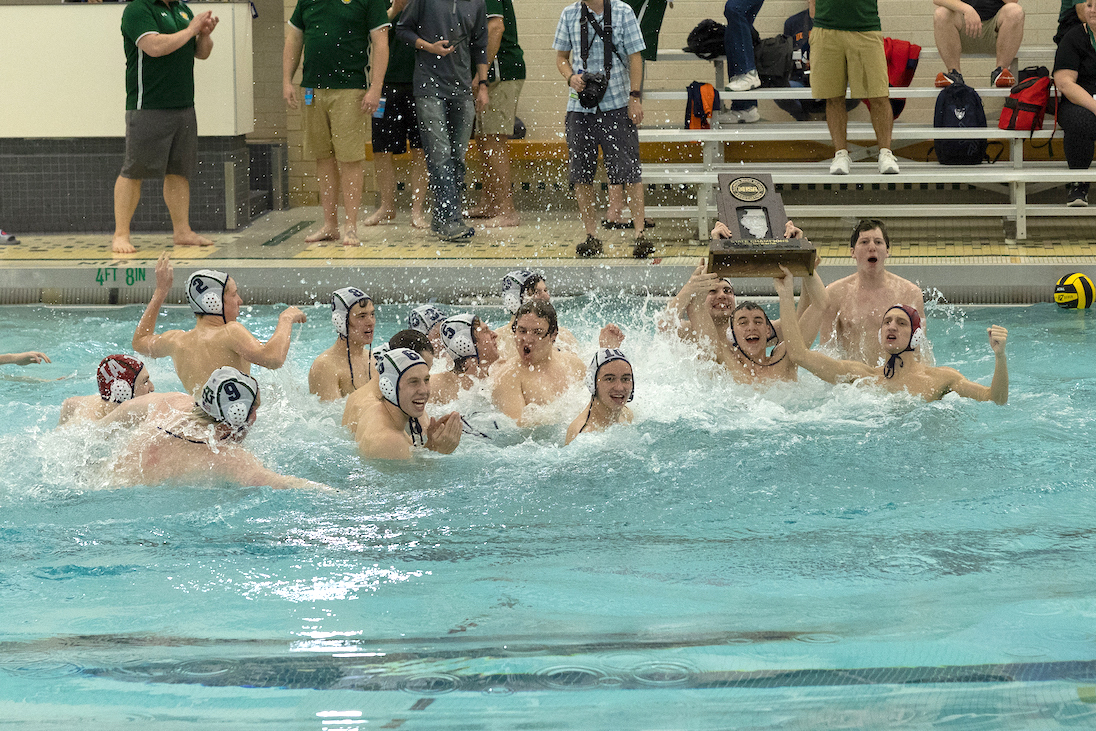 New Trier water polo’s huddle cry set the tone during a season to remember, and in the end, there was a family party in the Stevenson High School pool.

Armed with talent, chemistry and plenty more, the Trevians completed their state-championship run with a 13-11 victory against Whitney Young Saturday, May 21, before collectively leaping in the water in celebration.

“I don’t know how to describe the emotions to you. They come in waves,” New Trier coach Dave Rafferty-Flatter told The Record the next day. “You’re happy and emotional and proud. These guys are just something special. I think that’s what you feel, that you helped them get the payoff for everything they’ve been wanting and working for and sacrificing for. And I’m incredibly, incredibly proud of them and who they are.”

The title victory punctuated the Trevs’ record-breaking 33-2 campaign, during which their only losses came against Lyons Township, a team New Trier bested in the state’s semifinal match.

Despite several state-final appearances, the state championship is the first for New Trier water polo — boys or girls. Since Rafferty-Flatter took over the boys program in 2016, the Trevians have made six state finals (final eight teams) with two trophies: third place in 2016 and second place in 2017.

This season was unique from the onset, as New Trier posted impressive and dominant results wire to wire.

“Chemistry,” said senior Red Ricciardi about the team’s hallmark. “We’ve been playing for six years together — club and high school included. We are friends in the pool and outside of it. I think that really helps being able to play in the pool, being able to trust each other.”

New Trier needed that trust late in the championship bout.

The Trevians jumped out to a 3-0 leading, but it was short-lived. The Dolphins strung three goals together to tie things up early in the second period.

While New Trier took back the lead, the Dolphins matched punch for punch — it was 6-5 at halftime — until the end of third quarter with the score 9-8 New Trier.

Added to the competitive drama, Trevs goalie Eli Sternweiler, a University of Pacific recruit, was forced out of the game with cramps.

Backup goalie Luke Schermerhorn and the rest of the Trevians answered the call, scoring the final period’s first four goals to take a commanding 13-8 lead.

In the title game, New Trier got a goal apiece from reserves JD Lundberg and Alex Bailey as well as one from Diarmaid Halloran, one from Charlie Steinback, four from Ricciardi and five from Noah Wendt.

“I put myself in opportunities to score,” said Wendt, the son of New Trier girls coach Matt Wendt. “I think my team knew I could put them away and when I was open, they knew to pass it to me.”

In the final minutes, Whitney Young made a valiant comeback effort by scoring three straight goals, including two in quick succession.

But it was too little too late, and as the final seconds ticked down, the Trevians began jubilantly slapping the water. Ricciardi already watched a replay of the team’s celebration.

To get in the position to achieve their ultimate goal, the Trevians had to first exercise some demons — demons in yellow and blue.

The Lyons Lions handed New Trier its only two losses, the latest a 3-2 decision in the culmination of the Stevenson Classic — the only 3-2 water polo decision Rafferty-Flatter could remember. New Trier also topped Lyons early in the season.

In the fourth installment of the series came in the semifinal and saw New Trier grab and hold a lead, and then ratchet up its defense to earn the 9-6 victory.

The Trevs defense gave up just two goals in the second half and none in the fourth period. Wendt again was the offensive hero, scoring more than half his team’s goals — five of nine.

He added about Wendt, “Noah had a big, big weekend. Noah is probably one of the brightest players and one of the best players in the state. … That was on full display.”

But the Trevians played plenty of underclassmen along the championship journey, and Rafferty-Flatter talked about how the play and attitude of guys like Ricciardi has left a mark on the program that cannot be erased.

“These guys have earned every accolade they are going to get here,” Rafftery-Flatter said. “We talk about leaving a legacy and their standard is second to none and absolutely going to jettison this program into the future based on what they’ve done and who they are.”