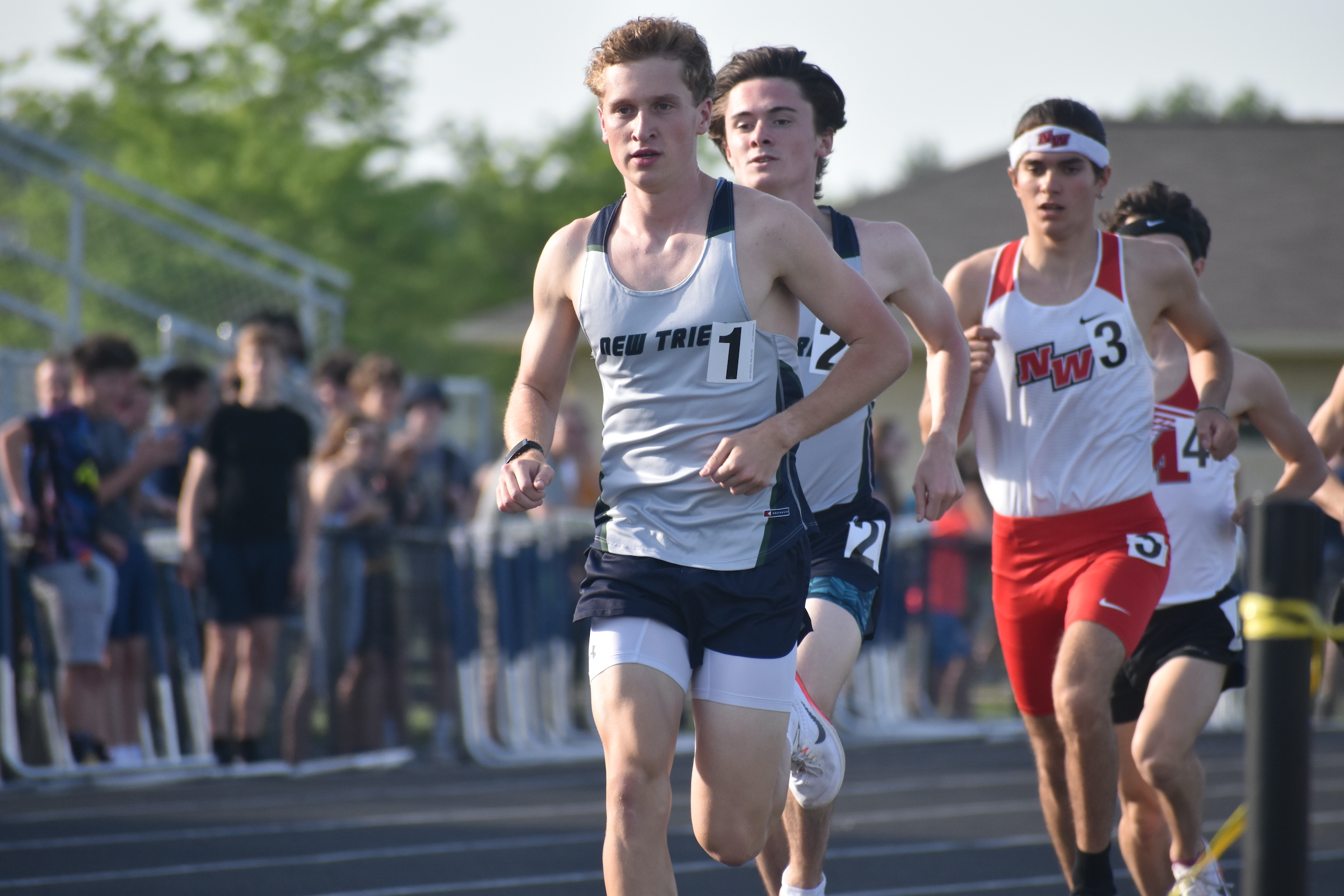 New Trier seniors Nick Falk and George Cahill get out to a lead in the 3,200-meter run Thursday, May 19, at the Glenbrook South Sectional.

As expected on the track, timing was everything for New Trier Thursday at Glenbrook South.

Amid hot and windy conditions, New Trier entries qualified for the state championships in three events, but in four other events, Trevians missed qualifying marks by a combined 0.93 of a second during the sectional meet May 19 in Glenview.

New Trier’s third-place 4-by-100-meter missed the mark by 0.46. Connor Koy took third in the 110 hurdles and was 0.34 shy of a state berth. Alexander Lesperance and Daniel Anyso finished 4-5 in the 100 dash, missing the qualifying time by 0.1, and Villanova-bound Ronan O’Neill took fourth in the 400, just .03 off making state.

All the top-five finishes, though, propelled the Trevians to a team score of 74 points, good enough for third place out of 15 teams at the meet. Host Glenbrook South (108) claimed the meet title, just ahead of Prospect (91). Evanston (58) and Loyola (44) rounded out the top five.

Leading New Trier were distance stars Nick Falk and George Cahill, both of whom qualified in the 3,200- and 1,600-meter runs. Falk — the state’s Gatorade Cross Country Runner of the Year — dominated the 3,200 to claim first at 9 minutes 19.06 seconds. Cahill cross the finish line next at 9:25.99.

At this point in the season, Schmitt said his trotters are all set for their state races, and Falk is gunning for a state championship.

“After taking second in cross country, … I really think he wants to close off his senior year with a state championship,” Schmitt said. “And George has run great all track season. He’s really been patient with his training. … He’s really locked in.”

Loyola’s Aidan Simon won the 1,600 with a personal best time of 4:17.98. He will be one of three Ramblers to compete in the state championships.

Out in the field, Loyola senior Clinton Ofosu won the triple jump with a length of 13.67 meters, and senior teammate Max Makowski took second in the discus at 43.3 to earn his state berth.

Loyola also got sectional points from Casey Gibbons, who took third in the 800; Enoch Appliah-Kubi, who placed fourth in the triple jump; and its 4-by-100 (fifth) and 4-x-400 (4th) relay teams.

New Trier’s third state qualifier is Jack Brewer, who clocked in at 22.2 in the 200 to claim fourth and best the qualifying mark (22.33).

“He has had a great year and he has always said that he really wanted to get to state in the 200 and has focused and worked super hard,” Schmitt said. “It’s great that he’s going to be down there. And I think he’ll run faster next week when he doesn’t have two relays before that event.”

Schmitt said while the Trevians may feel like they came up short at the sectional, the team accomplished a great deal throughout the season and had a significant impact on the future of the program.

“I think I think these seniors — there were 60 seniors on the team — really have paved the way for our underclassmen and I think our underclassmen will rise up in years to come to have really strong teams,” he said.