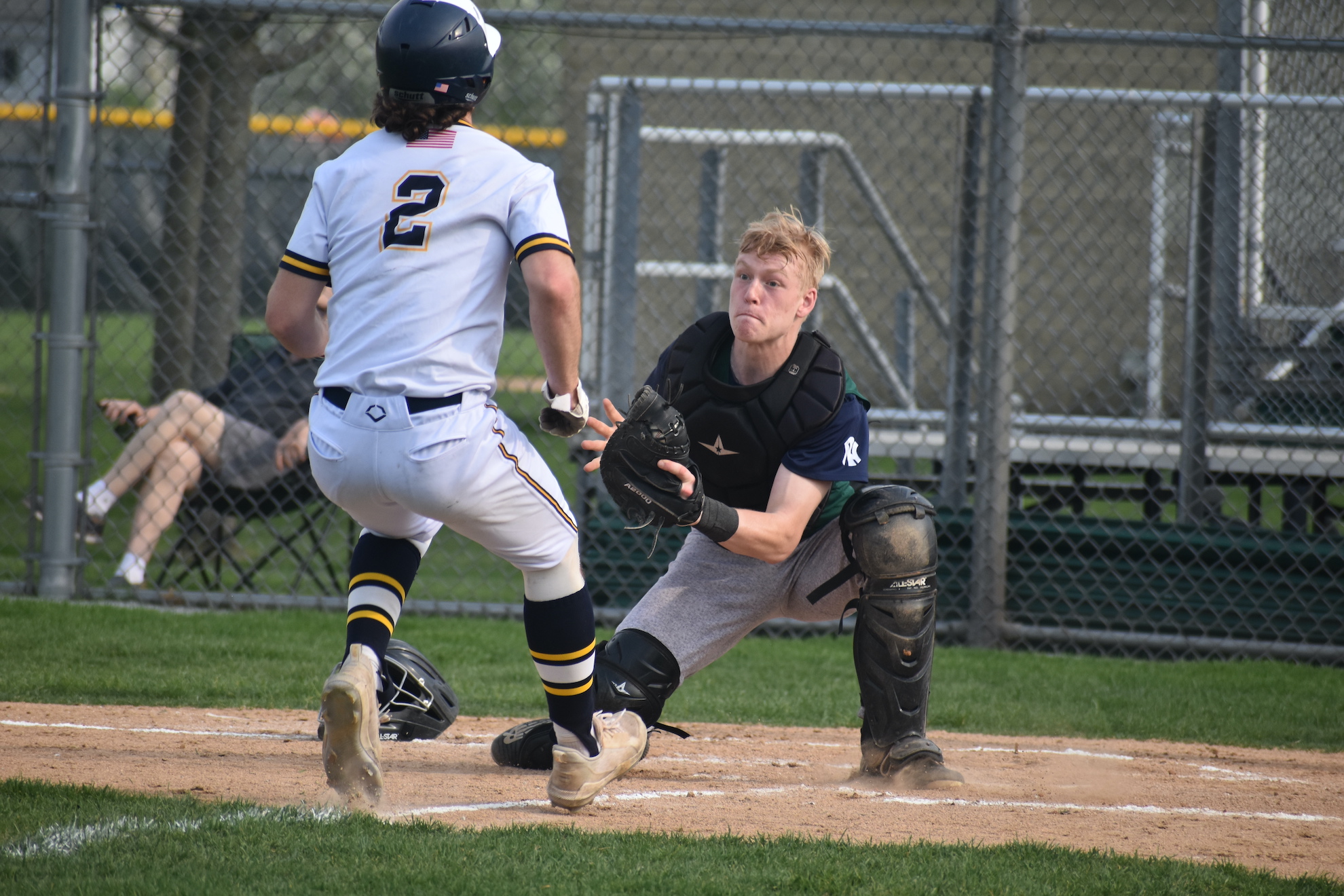 The baseball phrase “hit it where they ain’t” is easier said than done.

New Trier proved that Wednesday evening, May 11, when the Trevians’ batted balls couldn’t find the open grass in a 3-0 loss to host Glenbrook South.

In a game in which the Trevians stranded 10 runners, it was big situations in the second and fourth innings — both times with Aidan Nolan at the plate — that stung the most.

“He came through and did what he was supposed to do — saw the ball well and hit the ball hard,” New Trier coach Mike Napoleon said. “Sometimes you don’t get the breaks. Today we were a hit away from doing something.”

In the second inning with the bases loaded, Nolan barreled the ball for a long, line-drive out to center field, and two innings later with two runners on, the sophomore ripped a single that he “almost hit too hard,” Napoleon said, because the runners could not advance more than a base.

A batter later, a bang-bang force play at second base ended the Trevs’ rally.

New Trier also squandered runners in scoring position in the third and fifth innings, both of which ended in Trevian strikeouts.

“I think we have to take more competitive at-bats in general, but we hit the ball hard,” said Henry Wolfe, the Trevians junior catcher. “They played some good defense, and we have to strike out less.”

Wolfe led the offense with a 2-for-2 day, recording two singles and a walk. Senior Louis Florida was on base all three times with two walks and a single. But New Trier’s top four hitters went a combined 0-of-14.

“We have to get our players who hit back to hitting together,” Napoleon said. “All of us at once. It can’t be sporadic.”

New Trier also made two errors on Wednesday; though, limiting the damage, Wolfe threw out two runners trying to steal bases and tagged out another at home plate.

New Trier starting pitcher Justin Wood settled in after giving up two runs to the Titans in the first inning.

Wood, a sophomore and the son of Chicago Cubs legend Kerry Wood, was making his third varsity appearance and just his second start. He struck out six batters over four innings of work, giving up eight hits and three runs.

The 6-foot-4 right-hander ended his day by striking out three straight batters looking to stand a runner at third base.

“He started getting a better feel for his curveball,” Napoleon said. “You got to have command of your fastball and I don’t think he had great command in the first inning.”

The loss kept the Trevians below .500 on the season at 10-13 and dropped them to 6-3 in the Central Suburban League South. The resume landed the Trevians in the No. 6 slot in the potent Loyola Academy Sectional, potentially setting up a regional-championship date with the No. 3 Ramblers on Saturday, May 28, in Winnetka.

With a roster full of talent and a year after advancing to a supersectional as a No. 4 seed, the Trevians aspire to do damage in the postseason. To do that, Napoleon said the hitting and defense must come around.

“We gotta come together as a team, honestly,” Wolfe said. “As a whole, we have a lot of talent and I think if we can put it together fully we can make a deep run.”