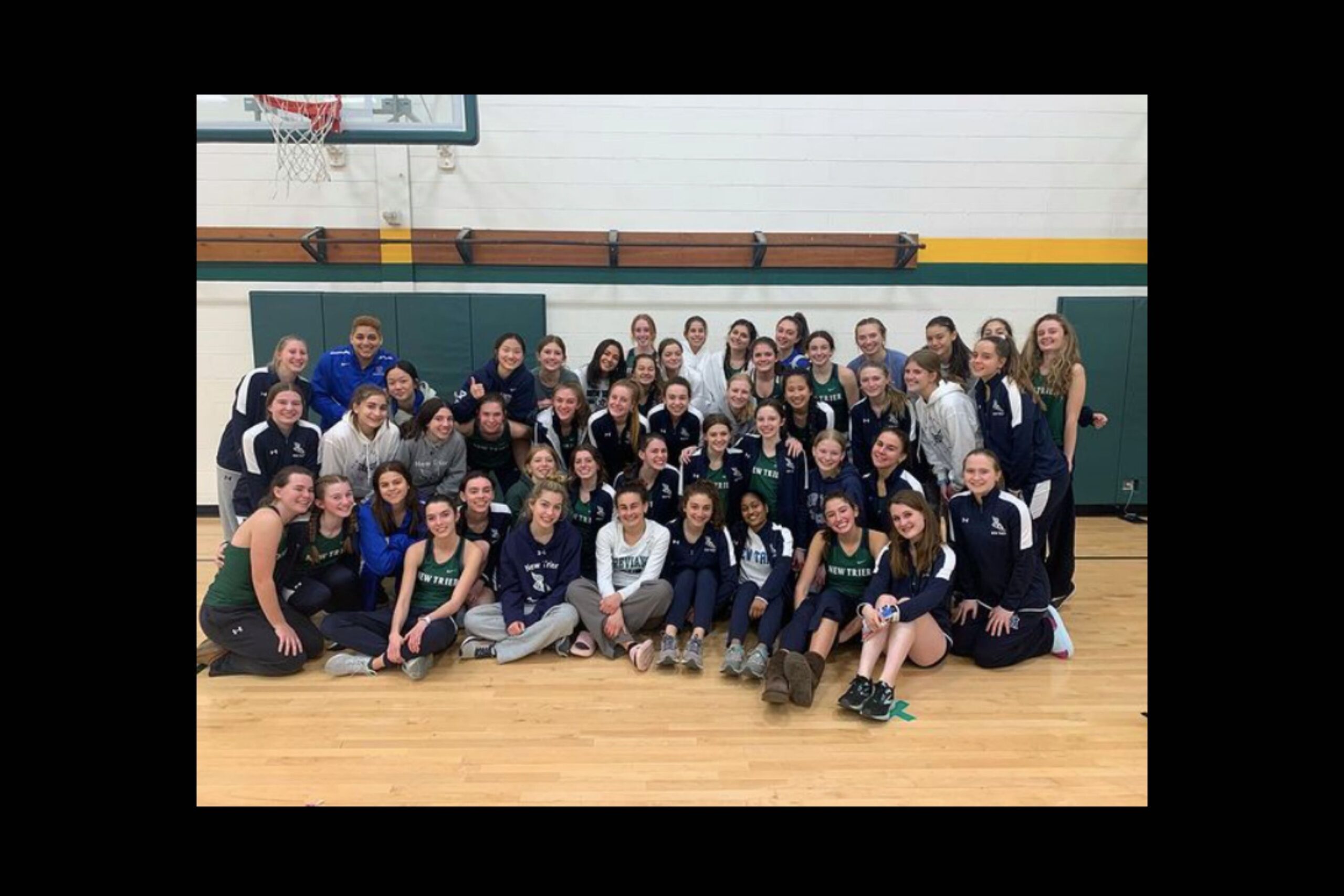 The New Trier girls track and field team during the indoor season in 2022. | Photo Submitted

P.J. Nylk had two hits, one of which drove in the game-winning run in the Trevians’ comeback win Wednesday, May 4

Haden Kriston finished 1-for-1 with two walks in the Ramblers’ league loss Monday, May 2, in Burbank.

Will Hayes struck out three while earning the save for New Trier.

Michael Clarkson struck out nine through five innings pitched for the Ramblers on Friday, April 29.

The Trevians picked up a league win Wednesday, May 4, in Northbrook.

Lily Grillo doubled and scored a run for the Panthers on Wednesday, May 4, in Wilmette.

Hailey Swanson struck out seven in the complete-game victory for the Panthers on Monday, May 2.

Swanson added a double and RBI at the dish and Nora Grillo pitched in two hits and four RBI for Regina Dominican.

The Ramblers earned a nonconference win Saturday, April 29, in Glenview.

Lauren Caldwell scored the lone goal for the Trevians in the league loss on Thursday, May 5. The Wildkits finish unbeaten in conference play.

Sophie Goby found the net for the Panthers in the loss Thursday, May 5.

Sybil Evans, Josei Noble and Kendall Sierens scored a goal apiece as the Trevs topped the Wolves on Tuesday, May 3.

The Raiders earned the league win on senior day Monday, May 2, in Winnetka.

Charlotte Dellin scored for the Trevians as they finished the Naperville Invite in a draw on Friday, April 29.

Grace Ehlert found the net for the Ramblers who collected a win in their final game of the Naperville Invite on Friday, April 29.

Colin Murray racked up 10 kills and Niko Zlatkovic had 5 blocks, but the Ramblers fell in the Catholic League affair Thursday, May 5, in Chicago.

The Trevs fell in the league matchup in Monday, May 2, in Northfield.

The Trevians outlasted their local rival Friday, April 29, in Northfield.

Ben Trapp (8 kills) and Colin Murray (7 kills) led the way for the Ramblers.

The host Ramblers earned the victory Tuesday, May 3, in Glenview.

Addie Shevitz scored four times and Grace Curry three in the Trevians’ victory on Thursday, May 5.

Audrey Rudloph added a pair of goals for New Trier (12-2), which overcame an early 4-3 deficit and scored the final six goals of the game.

Maeve Dwyer racks up five goals and two assists to lead the Ramblers on Wednesday, May 4, in Glenview.

The Ramblers topped their visiting local rival Tuesday, May 3, in Glenview.

Maggie Bramblet and Abbey Schurr scored three goals apiece to lead the Panthers to victory on Saturday, April 30, in Chicago.

Josie Cahill, a freshman, won a thrilling 1,600-meter race by 3 hundredths of a second to claim the conference title for New Trier on Thursday, May 5, in Evanston, where the Trevians (177 points) also picked up a team title over Glenbrook South (133) and Maine South (126).

Other top finishes for New Trier were Fellman in the 800 and Sophie Garrou in pole vault. Manzano nabbed second in both the long and triple jumps.

Emilise Comeau picked up two firsts (discus, high jump) and a second (shot put) for North Shore Country Day, which placed second as a team. Ella Capozzi and Danielle Savin finished 1-2 in the 100-meter hurdles, and 2-1 in the 300 hurdles for the Raiders.

David Jackson and Cole Connolly finished 2-3 in the 200 dash for the Raiders, who placed fifth on the boys side.