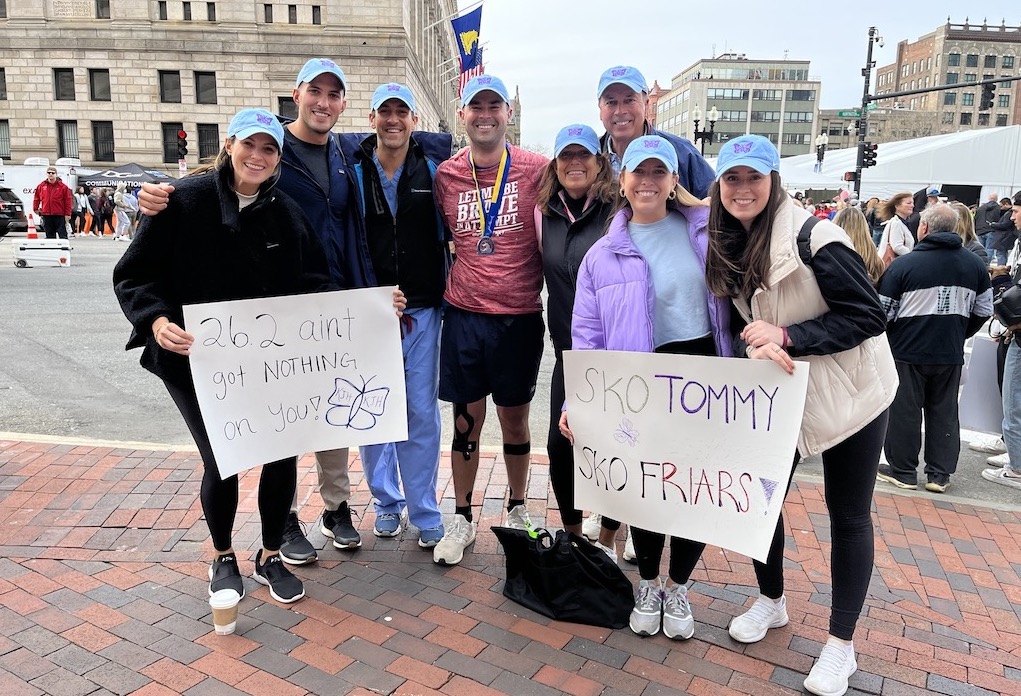 Family surrounds Wilmette native Tommy Lyman after he finished running the Boston Marathon in honor of his stepsister who died in January. | Photos submitted

Tommy Lyman cherished the unique bond he shared with his step-sister Kate Hilbrant — a bond that did not end when she died in January.

Lyman continued honoring their connection on April 18, when he competed in the Boston Marathon.

“Kate was such a big sports person and all she wanted to do specifically when she was around me was talk sports,” said Lyman, a Wilmette native and Loyola Academy alumnus. “So I thought a very special way to remember her and honor her is to run for Special Olympics Chicago, something that meant a lot to her and one of our big connections.”

Kate Hilbrant, of Winnetka, was 32 years old when she died from a medical emergency related to epilepsy. A New Trier High School graduate, she was an All-State water polo player and participated regularly with regional Special Olympics chapters.

In her honor, Lyman sought to raise $5,000 toward the Special Olympics Chicago to support his Boston Marathon run. That total was eclipsed in 12 hours, he said.

“It has been a tough time for everyone,” said Lyman, one of seven children in the blended family, “so I think (the fundraiser) gave everyone something not to be somber over but excited about. … The outpouring of support was unlike anything I’d ever seen.”

Lyman said his self-promotion was minimal. All it took was sharing the link with family and friends and on social media.

“I never could have imagined for it to have gotten to where it was,” he said.

Kate was with Lyman in more ways than one during his marathon journey. While training in the evening, he wore a running light, which happened to be a gift from his step-sister in a secret-Santa exchange.

“I don’t think I’ve ever seen anyone so excited to give me a gift,” he said.

The Hilbrant-Lyman clan trekked to Boston to watch over the Easter weekend to celebrate the holiday and then cheer on Tommy’s run in honor of Kate. The family was repping Kate, too; they all wore matching blue hats featuring a purple butterfly, an emblem just for her.