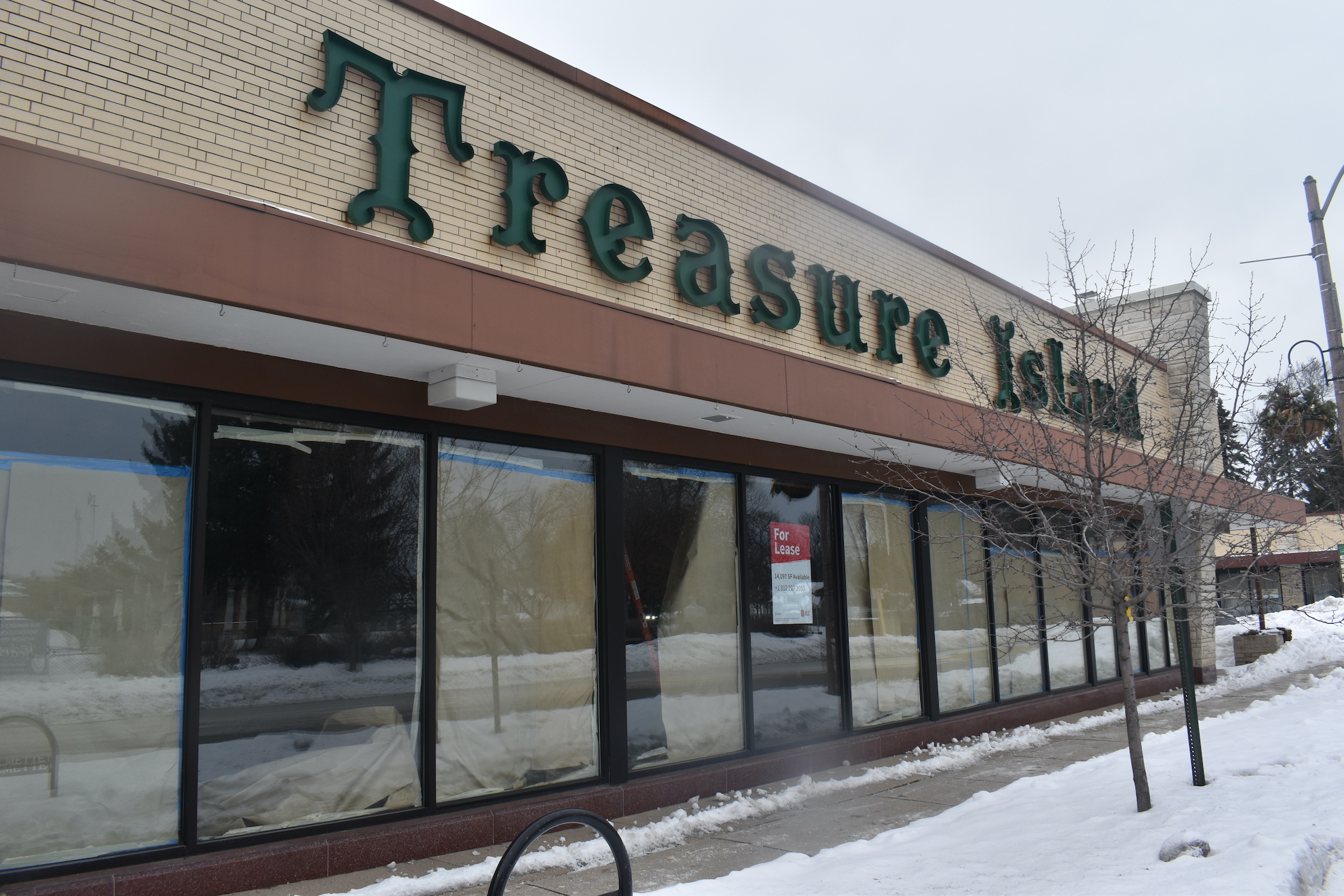 The good news: Over the past year, Wilmette’s vacant-storefront rate has significantly fallen, officials said.

Since the village’s last economic development update in May 2021, the vacancy rate has decreased to 7.8 percent, or 32 of 388 storefronts. Village officials say it is the lowest mark since June of 2019.

Village staff members, presenting at the regular Village Board meeting on Tuesday, April 12, attributed the improvement to a number of recent business developing , including the opening of Buck Russell’s Bakery and Sandwich Shop, which occupies four storefronts on Greenleaf Avenue in downtown Wilmette; and the announcement of Wayfair, which will move into the former Carson Pirie Scott box in Edens Plaza.

On the opposite side, the former Treasure Island store at 911 Ridge Road remains problematic for the Village, which is pessimistic that it lands its desired retailer.

Village officials have long expressed hope that another grocery store replaces Treasure Island, which closed in 2018. The location was subsequently leased by Goodwill Industries, which officials say walked back a plan to open a Goodwill store and donation center.

Lucas Sivertsen, Wilmette’s business development coordinator, told trustees Tuesday it is becoming less and less likely a grocery store takes over the site. He explained that, while multiple grocers have expressed interest in Wilmette, the former Treasure Island site is not the location they are interested in.

Sivertsen said finances, including rent and real estate costs, have played a role in deterring grocers, but more factors are at play, including the space’s location on Ridge Road.

Village Manager Mike Braiman said that he understands the neighborhood really wants to see a grocery store, and the village shares that desire, but officials have to hold realistic expectations.

“It’s very, very unlikely we’re going to see a grocer,” he said. “Even with the substantial financial incentive from the village, it just is not going to work in this space, most likely.”

One is that the current property owner wants to retain ownership and is looking for either a development deal or to lease the former dealership, which closed in 2017. Additionally, Sivertsen said, the property is large and located next to a single-family residential development. The factors have proved challenging for potential occupants.

“And unfortunately for Imperial Motors and the village, there have been several deals that have been in the works, but sort of at the last moment, where we thought something could actually be presented, the applicants backed out,” he said.

Sivertsen is hopeful that the village’s ongoing process to develop a comprehensive plan will give some ideas on what to do with those properties.

Though the plan is not finished and no recommendations have been prepared, Blue said his group is currently gathering information, including conducting public polls on the website readysetwilmette.com – the current poll is the second so far and both focused on diversity and inclusion.

Blue said Teska has also held public meetings and spoken with a number of focus groups and commissions, such as the village’s Architectural Review Commission, Human Relations Commission and the Sesquicentennial Committee.

The next steps, he said, include “(translating) this knowledge, this learning, this information we’ve collected about what’s on the ground, what are the markets, and more to that, what are the priorities and values that we have heard from the community, from the website, and from the commissions. How do we translate those into goals and objectives into a vision statement?”

Another part of the plan would be studying sub-areas of the community, including areas around Green Bay Road, Ridge Road and Linden Square.

Trustee Peter Barrow encouraged Blue to find out what the community wants to see, particularly in the downtown area. He said the area has seen recent residential developments and would be interested in knowing the opinions of the community on the central business district’s appearance.

“But just focusing on the downtown, I think it’s really important that, besides all the various topics that you’ve described today, that we as a board come away with a clear understanding of what the residents’ expectations are for our downtown,” Barrow said, adding the area has a “particular look” to it. “If that’s going to change, it needs to be a very deliberate act.”

Trustees also asked about diversity and inclusion and housing and encouraged more questions on those topics.

Village President Senta Plunkett said it is important to reach out to minority communities and make sure their voices are heard in the comprehensive plan.

“It’s nice for people to be aware of that, that our community is having a discussion about it,” she said.

Additionally, Trustee Kate Gjaja suggested reaching out to people who do not live in Wilmette to find out why they chose not to move to the village.

“The ability to figure out how we speak to people who have chosen, perhaps, not to live here and what we can learn from that experience seems like it could be really useful data for us,” she said.