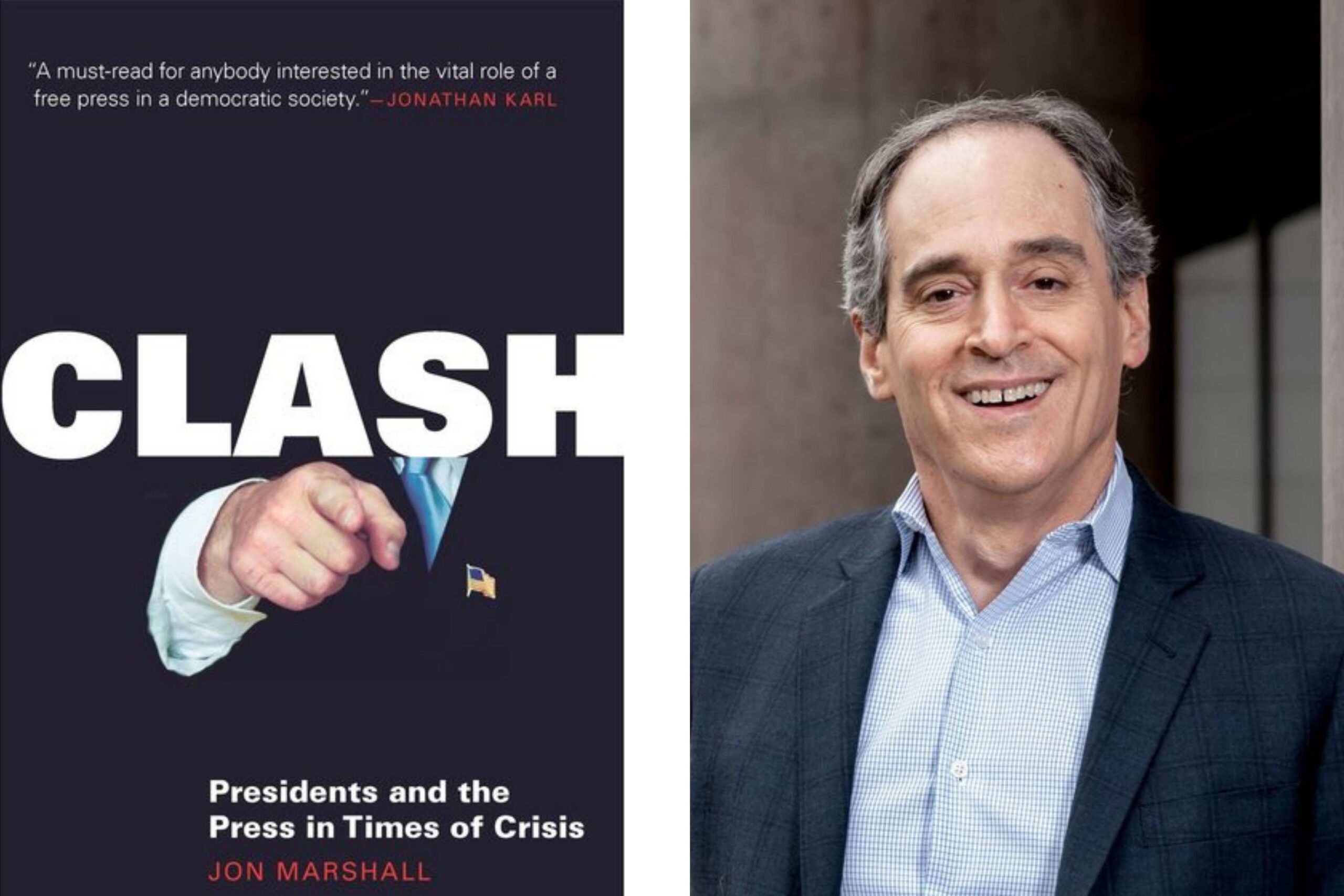 Wilmette resident Jon Marshall's book "Clash" will be released on May 1. | Images from JonMarshall.com

The word “unprecedented” has been used to describe many things in the past few years, but according to Wilmette author Jon Marshall, a contentious relationship between the press and the president is not one of those things.

Marshall’s new book “Clash: Presidents and the Press in Times of Crisis,” out May 1, examines the dynamic between journalists and U.S. presidents to reveal a turbulent past.

Shortly after the title’s release, Marshall will discuss his work and sign copies at 6:30 p.m. May 4 at the Book Stall, 811 Elm St., in Winnetka.

The impetus for Marshall’s book hit around 2017, when Donald Trump became president in spite of — or because of — his toxic relationship with the press. Marshall — an associate professor at the Medill School of Journalism, Media, Integrated Marketing Communications at Northwestern University — felt compelled to learn what led to the strained dynamic between the media and president.

“I wanted to figure out what was unprecedented and what had precedence,” Marshall explained. “It led me through some really interesting history.”

Marshall’s research, focused on primary sources, served as the foundation of the book, which spotlights 10 presidents to show the longstanding tension between heads of state and their contemporary reporters.

The Sedition Act under John Adams — the nation’s second president — for example, made it illegal to say, write, or publish anything that made the government or president look bad; as a result, more than 100 people, including newspaper editors, were prosecuted.

Abraham Lincoln censored information and closed newspapers (such as the Chicago Times), among other betrayals of the first amendment, as part of the effort to keep the Union intact. Richard Nixon encouraged his aides to denounce journalists whenever possible.

Marshall’s biggest challenge in the writing process was deciding what to include in the book from such an abundance of relevant material. He credits his wife, Laurie Goldstein — whom he has lived in Wilmette with since 1994 — and sons (Justin, Andrew, and Zach) with listening to his ideas and providing him editing and proofreading advice.

Marshall’s fascination with presidents is nearly lifelong. At 5 years old, he shook the hand of then-presidential nominee Richard Nixon. Starstruck, Marshall became increasingly interested in presidents and how they were portrayed.

Both of Marshall’s parents were newspaper editors, and his adolescence saw Watergate and other newsworthy events that influenced his decision to become a reporter. He wrote for a series of daily newspapers before turning to teaching but credits his time as a journalist in Chicago with igniting his interest in political power dynamics.

In a phone call with The Record, Marshall recalled an old joke about Chicago: the reason Chicago sports were so bad for so long is because the city’s politics were the real sports. The dizzying volleys between political opponents, among other happenings covered in the papers, intrigued Marshall and laid the groundwork for the political analysis he exercised in “Clash.”

According to Marshall, a certain amount of tension in the relationship between the press and presidents is healthy, since journalists perform a watchdog role that partiality would compromise.

When that tension becomes concerning is when presidents start “engaging in censorship or threatening journalists, or trying to speak against the first amendment and denigrate freedom of the press. Or, when journalists become so obsessed with scandals that they try to outdo each other and report on things that are thin on facts,” he said.