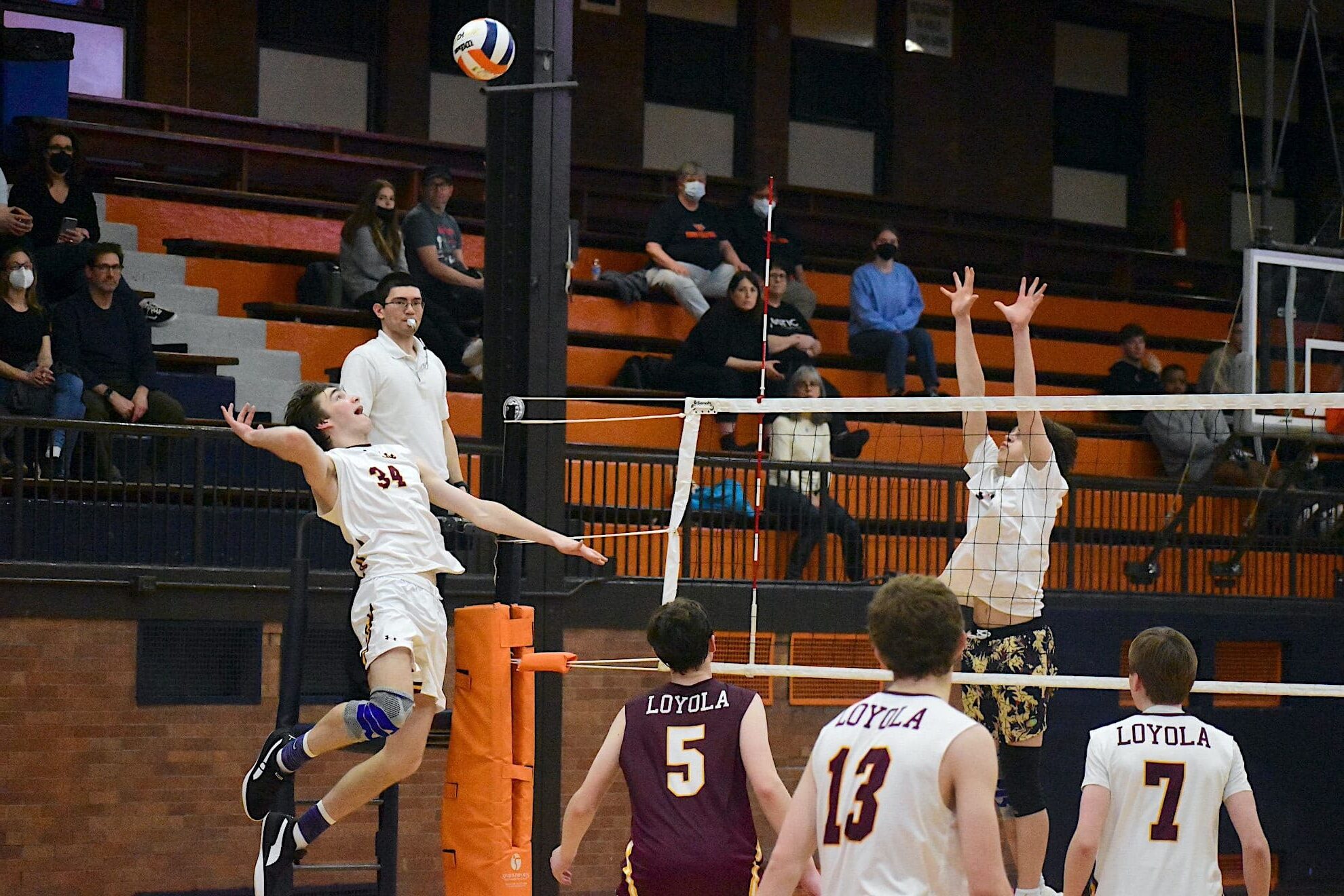 An Evanston native, Lionel Ebeling is a Wildkits fan, just not when his Ramblers are the opponent.

The Loyola Academy volleyball coach got a firsthand look at a potent Evanston squad on Wednesday, March 30, at Evanston Township High School.

“That’s the best Evanston team I’ve seen in a while,” Ebeling said. “They have good commitment, Stanley (Antoine) is a phenomenal coach, they have a lot of positive energy. They never once gave up.”

Neither team folded in the competitive three-set match that saw six lead changes in the final set.

The Wildkits overcame seven serving errors — 16 in the match — in the decisive third game to upend the Ramblers.

Facing match point, 25-24, in Loyola’s favor, Evanston got a kill from Johnson Adekunle and block from Aiden Klein to take the lead. An unforced Ramblers’ error ended the match.

Loyola had trouble handling the Wildkits’ aggressive serves. The Ramblers’ passing was off-target much of the match, resulting in a limited offensive attack.

“I think we just lost the serve receive battle,” Loyola senior Casey McMenamin said. “We weren’t as crisp as we normally are in all aspects of the game — serving, passing, hitting, blocking. I think we came out flat, especially in the second set.”

The Ramblers were in control in the first set, 12-7, before Evanston went on a run to tie things at 13-13. Down the stretch, the lead changed hands five times, but Loyola senior Colin Murray killed three balls to give his team the advantage late, and Loyola earned the 25-23 win.

Evanston fired back in the second set, using a mid-set 10-2 burst to take a 20-11 lead. The Ramblers clawed their way back for a one-point deficit, 24-23, but a wily tip kill by ‘Kits setter Isaac Clay-Barbour finished things off to set up the third set.

The loss dropped the Ramblers to 6-2 on the young season. Loyola has topped St. Ignatius and Niles West and won four of five matches in the Vernon Hills tournament March 25-26, when it won the consolation bracket to claim fifth place.

The Ramblers are coming off a 29-win season, in which they captured conference and regional championship. Ebeling pointed out, however, this is a new-look group with many first-time varsity contributors.

“We’re young,” he said. “We’ve got to learn through some of the adversities. … We have to play more disciplined, have fewer unforced errors.”

McMenamin is a key returner for the Ramblers, who will rely on the Vassar College commit’s multi-faceted game. The senior is the team’s lead setter, but also swings from the outside in a rotation and is one of the team’s best defenders, Ebeling said.

The shorter Ramblers will rely on their passing and a short memory, McMenamin said.

“Our biggest strongpoint is our ball control — not tonight obviously — and we’re a smaller team but we take that to heart,” he said. “We don’t really care if people bounce (kills) over us. We know we’re going to pass the next ball and side out right away. That’s our mentality — just next point, let’s go.”

Murray is joined on the outside by 6-foot-4 sophomore Ben Trapp, while seniors Mark Gonzalez and Nikola Zlatkovic will patrol the middle. Sophomore Stef Kins is the Ramblers second-rotation setter, and senior Andrew Sheedy is the starting libero.

Ebeling called the Evanston loss a learning experience that can only help the young Ramblers as they find their way. For his team to meet its goals, however, he said they will have to find “those two points” — the margin of defeat — more often than not in crucial matchups.

“We win a lot of games at Loyola, but it’s those key games, those critical games, those games against Glenbrook South and New Trier and in our conference — St. Rita, Brother Rice,” he said. “How do we do in those. If we can be more than .500 in those, we’ll have a great season.”