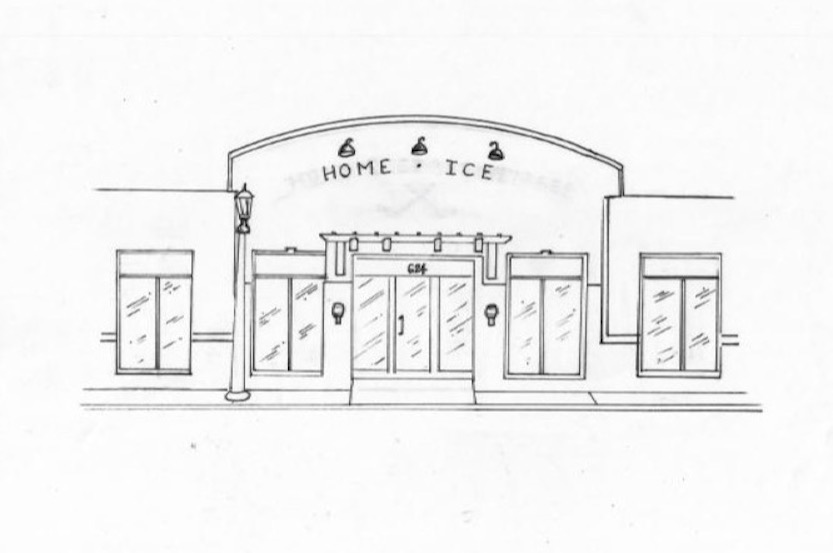 A rendering of the front facade of the new space for Home Ice, 624 Green Bay Road, in Kenilworth. | Images from Village of Kenilworth

A hockey training facility is getting its shot in Kenilworth.

According to its village documents, Home Ice is primarily owned by Jeffrey Dolphin, a New Trier High School graduate who has operated hockey pro shops in Winnetka and Northbrook under the same name since 2016. The Winnetka store is now closed, and the Northbrook location is within North Shore Ice Arena.

Home Ice Hockey will offer hockey-gear sales and skate sharpening — a speciality of the business — but will focus on off-ice hockey training for teams and individuals, according to the business’ permit application. The facilities will include a shooting and skills gallery, fitness areas and a “video lounge” and may utilize synthetic-ice tiles.

The business concept was first presented to the Village of Kenilworth in September 2021. After applying for a special-use permit, Home Ice representatives appeared before the Kenilworth Plan Commission in January, when they received a positive recommendation.

According to village documents, the building owned by Snellback Properties was purchased by Homemaker LLC, a corporation owned by Dolphin’s mother, Dawn Ratts, and then leased to Home Ice.

The Village Board first considered Home Ice’s case in February, when trustees expressed concerns about parking and traffic in the area. In response, Dolphin and company with Home Ice reportedly agreed to a number of conditions, including client limitations on weekdays — no more than 26 participants from 6-7:45 a.m. and 3:46-9 p.m., and no more than 10 from 7:46 a.m.-3:45 p.m. The midday numbers can increase on days New Trier High School is not in session, documents say.

The business’ parking will also be monitored by the police department. Home Ice reportedly will offer 20 off-street (Green Bay Road) parking spaces, with 14 in an adjacent lot and six more behind the building. Dolphin said in an explanation of the concept that guests are usually children who get dropped off by their parents.

“Given the location of the property in the heart of the community and so close to New Trier High School, we anticipate that many team members will walk or ride their bikes,” he wrote.

Dolphin did not immediately return a message from The Record, and it is unclear when Home Ice hopes to open.