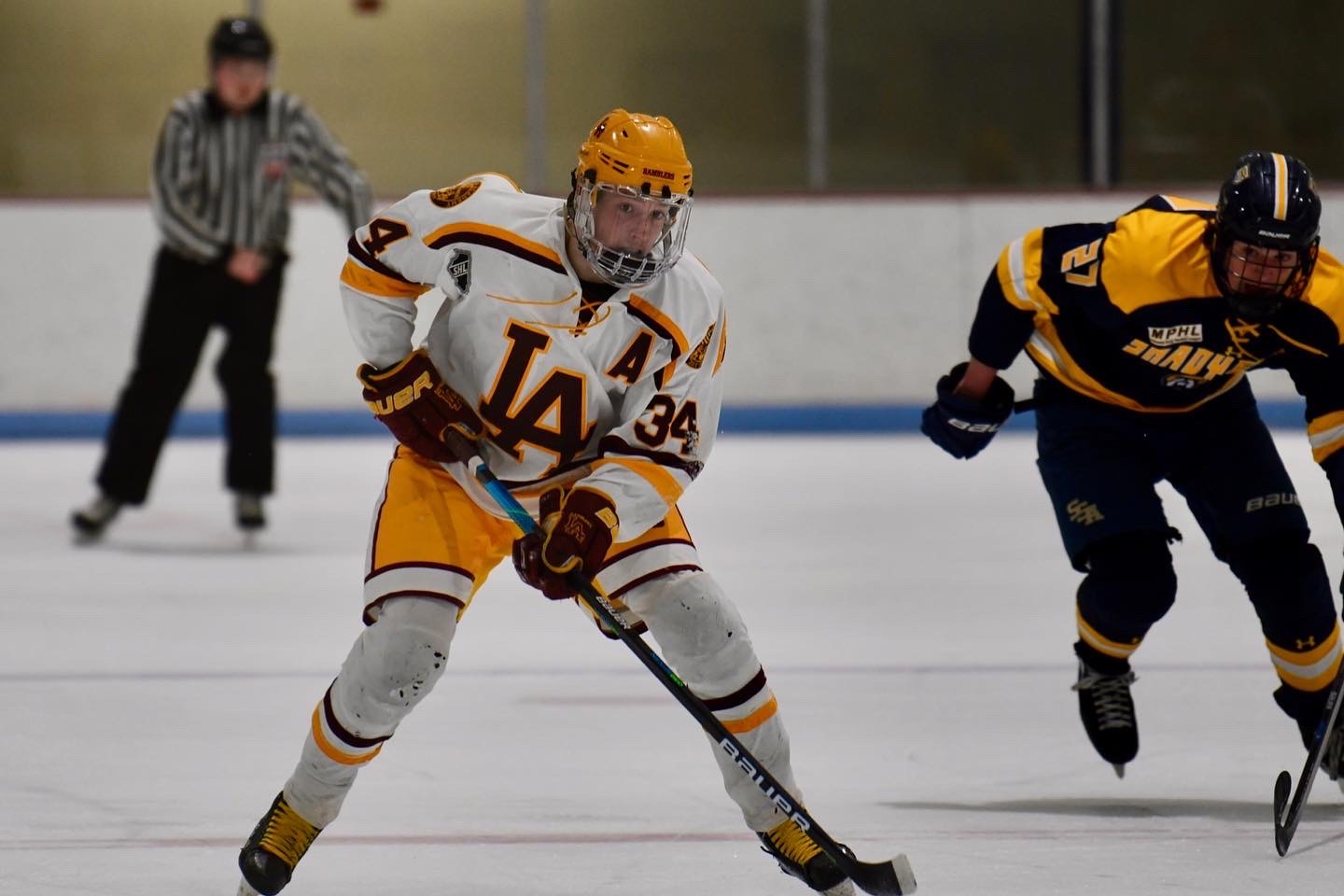 Loyola Academy's Jack Gustafson was the league's leader in both assists and points. | Photo by Todd Cowen

Jack Gustafson, of Wilmette, is a senior right winger for the Loyola Gold hockey team. Gustafson was an All-State selection who led the Scholastic Hockey League in assists (29) and points scored (53 in 27 games played).

Me and my team always do the same stretch routine and always play soccer before and after we stretch to get us loose — well, some of us do, not the whole team.

I believe I will be attending Indiana University. I will most likely go there. If not, I will probably go to Penn State. Indiana, is my first choice, but I want to see them one more time.

My grandparents went there. I have a lot of friends who go there and I really like the school as a whole.

I don’t really know but probably something what would allow me to travel and to see the world. That would be pretty cool.

5. If you could try another sport, what would it be?

Definitely football, especially with how good our football team is for Loyola. I think that would be a lot of fun. I would want to be a wide receiver, but I’m definitely too slow for that.

6. What is your favorite thing to do off the ice?

I really like playing pond hockey with friends when it’s winter and playing basketball in the summer. Really just spending time with friends and family, especially before we all go off to college.

7. What led to such a productive season for you?

Of course my teammates — I had a lot of assists this year — finishing passes that I gave them. The coaching staff, DJ (LaVarre), Scott (Ciraulo) and Dustin (Lockwood), helping me get the tools I needed, putting me out there in the right situations to get points. I played with a lot of good players. If look at my linemates, they were also in top 10 for points scored: Ryan Boersma (35 points) and Will Schrieber (35) and then Max Gabal (13) and Garet Grady (23).

I would probably buy a Gatorade — any flavor but red — and maybe a candy, like Swedish Fish.

In eighth grade, I wanted to quit hockey and try to play a new sport like baseball, but I ended up sticking to hockey once I got to Loyola. I really enjoyed the culture here and liked the kids here. Friends and coaches made me stick with it.

10. How would you describe your senior season?

I’m obviously disappointed in the fact that we didn’t win state. But in the season as a whole we accomplished so much as a team. We really didn’t have our full lineup (because of) injuries until the Glenbrook South game (quarterfinals) at state. … We accomplished so much. We won the SHL for the second year in a row, the Jesuit Cup (over St. Ignatius), the O’Grady Cup (Thanksgiving tournament) in its 50th anniversary. It was really cool to be a part of that and see how much success we had this season.