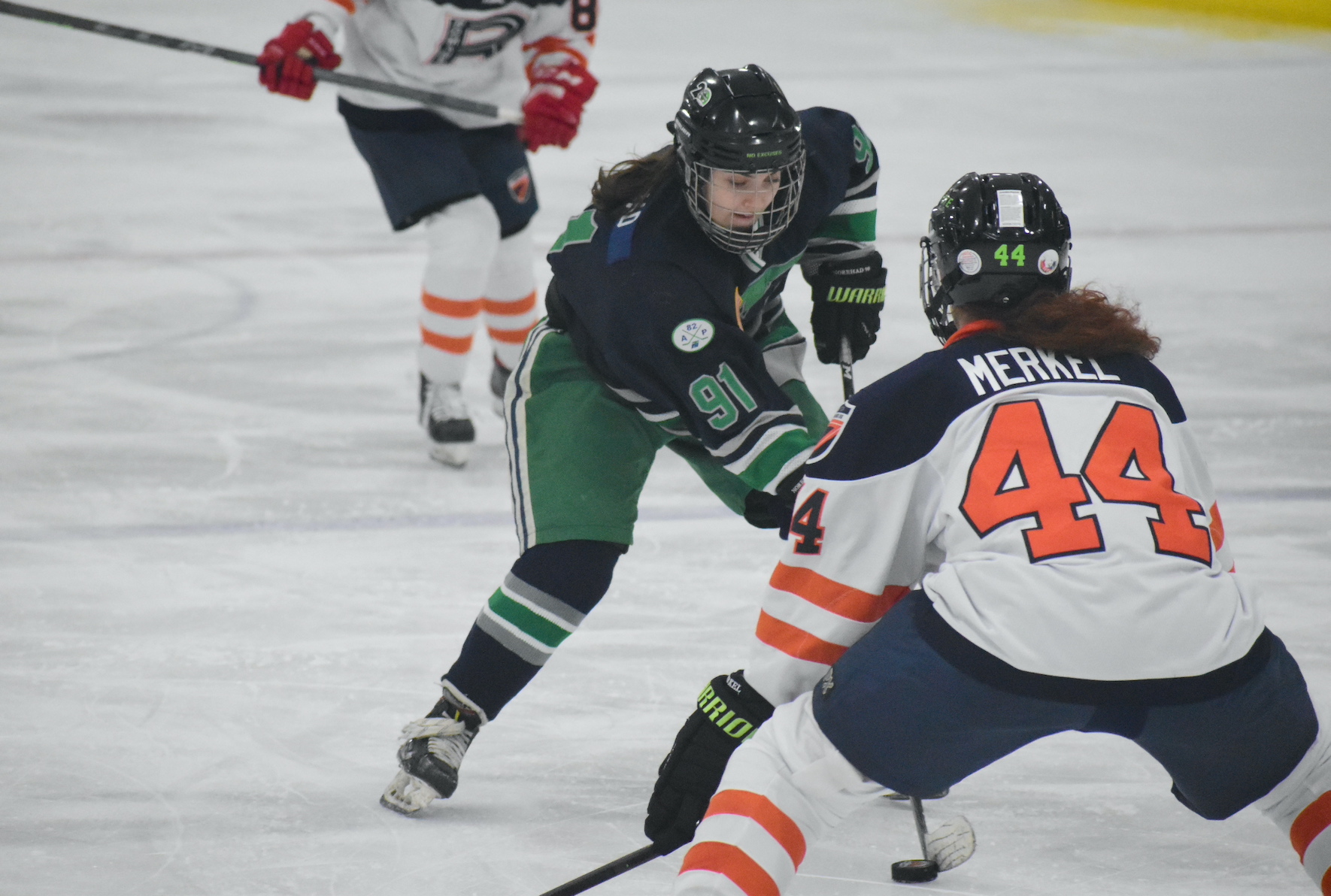 New Trier's Margot Norehad tries to get by Chicago Central's Annabelle Merkel during the state championship Sunday, March 13, in Bensenville.

New Trier Blue’s magic was not going to work on Chicago Central.

After all, the Trevians and Romans are familiar foes. The state’s top-two teams faced off five times this season, and it was fitting the finale was the state championship Sunday, March 13, at the Edge Ice Arena in Bensenville.

The Romans (25-0-2) fought off a third-period Trevs’ comeback to earn a 4-2 victory, the Blackhawk Cup and an undefeated season.

“We knew how we needed to cover, how we needed to play,” New Trier forward Callista Chong said.. “It’s the little changes that needed to happen if we wanted to come out on top. We were close. We just lost it in the end.”

Chicago Central — a combined squad that comprises student-athletes from Jones, Lane Tech, Latin, Lincoln Park, St Ignatius and Whitney Young high schools — jumped all over New Trier early, scoring twice in the first period and quickly in the second to hold a 3-0 lead 17 minutes into the game.

The early struggles were familiar to the Trevians, who overcame a 2-0 deficit to shock Fox Valley 4-3 in the tournament’s semifinals.

“In the locker room, we were saying if we get one early in the third, then it’s just 3-1. That’s where it starts,” Chong said. “We got one early, then we got another one, and then we just lost our momentum, but for a moment, we had it going.”

Chong was the catalyst of New Trier’s surge.

About 30 seconds into the final period, Chong found fellow junior winger Margot Norehad for the quick strike — a shorthanded goal that pumped up the Trevs’ fans.

The New Trier rush stayed persistent much of the period, but it didn’t find the net again for nine minutes. Then, Chong took a lead pass near center ice, out-skated two Romans and juked a third before wristing a shot into the net to make it a one-goal game with 5:13 to play.

But a miracle comeback wast not meant to be. A Trevs’ penalty with about two minutes to go led to a quick power-play goal from the Romans that sealed the deal.

“It was a heck of a comeback; we just had to stay out of the (penalty) box,” New Trier coach Lenny Munson said. “The penalty with two minutes left in a one-goal game — very questionable. But it is what is it. We didn’t score on the power plays we had.

New Trier Blue finishes the 2021-22 campaign at 17-7-1 — five of the losses coming to the Romans — with second place finishes in the conference and state championships.

New Trier fell short of its 10th state title in program history (last championship in 2018) on Sunday. But after two years with no state tournament, the goal was to give themselves a chance, Chong said.

“It was just all about getting here,” she said. “Before every game, we said it was the road to the (United Center), then it changed to the road to the Edge … And we got here.

“Just playing in this game and having this experience, for the seniors on the way out, it’s. We put up a really good fight, especially in the third. We did what we could and I think we can be happy with the season we had.”

And there’s always next year.

“The future is very bright, very bright,” Munson said. “We’re ;osing some very good seniors, but next year we’re going to be right there again.”