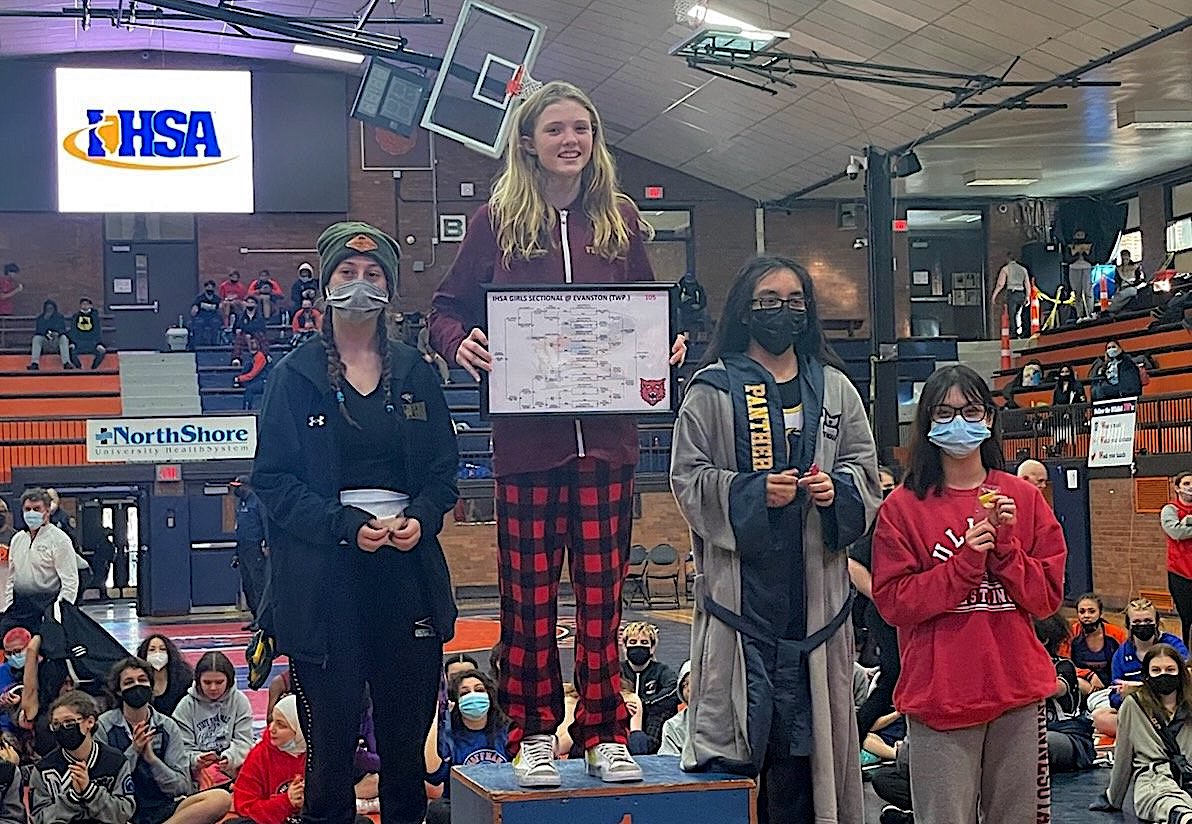 It was a historic high school athletics season in Illinois. For the first time, the Illinois High School Association designated girls wrestling as an independent sport, giving female wrestlers the chance to participate in their own state championship series.

Many schools, such as Loyola Academy, had rostered female wrestlers in recent years, but until this season, the girls competed with boys throughout the year. The change allowed wrestlers like Ramblers freshman Harlee Hiller to make state history as part of the first girls-wrestling state finalists in IHSA history on Feb. 26 in Bloomington.

Hiller punctuated the achievement with a third-place finish in her weight class.

“I wrestled in a lot of the boys tournaments and meets and that helped me for the girls meet by getting me lots of wrestling experience, so by the time girls state came around, I was ready,” said Hiller, who finished third in the 105-pound weight class. “I did think it would take a little time for me to have success, especially since a lot of the girls were more experienced than I was.

“It was really amazing to be part of the first girls state meet, and I’m excited to get three more chances to experience it.”

Hiller’s success is no small feat, according to Ramblers coach Matt Collum. Illinois is known for its wrestling, no matter who is on the mat.

“Like on the boys side, Illinois has some of the best girls wrestling on the country,” Collum said. “To see them get recognized and have their own state tournament was really exciting.”

Hiller had not wrestled before coming to Loyola, but her background in another sport — judo — helped her have immediate success.

Her martial-arts training began about 10 years agin when Hiller’s parents — Kelly Amonte Hiller and Scott Miller, who coach Northwestern women’s lacrosse — brought her along to a judo gym about a decade ago.

Kelly and Scott were looking at the space as a possible Wildcats’ training site, but Harlee was watching the sport.

“Judo was such an amazing experience from the start and I’ve made so many friends out of it,” she said. “I love going to all the tournaments and don’t know what my life would be without it in my life. It’s been so amazing.”

But why go out for wrestling, especially after not having participated in the sport?

“A lot of my judo coaches suggested trying it because it was so similar, so I thought I’d give it a try and loved it,” she said. “It was hard at first getting used to it because, for example, in judo, you can’t touch the legs, so getting used to that was a big adjustment.

“The hardest thing (in wrestling) for me was stopping people from shooting (at my legs) and getting up from bottom (position). But as the season went on, I practiced more on those and got better with that and defending wrestling moves.”

Admittedly timid at first, Hiller gained more and more confidence as the year went along, especially as she incorporated her judo skills.

Collum said once she got the hang of wrestling rules, Hiller was a standout.

“She has a really good feel in balance and is really explosive, which judo really helped a lot with,” Collum said. “There are some things that take a little bit of time to learn, especially if you’ve never wrestled before, but having that judo background helped so much. She was able to use a lot of her judo takedowns on the mat.”

Along with judo and wrestling, Hiller runs cross-country in the fall and plays on the Ramblers junior varsity lacrosse team in the spring. On top of lacrosse practice, she will still train in judo multiple times a week.

Coming into high school, Hiller knew she didn’t want to limit herself to just one sport, so she was open to trying new ones, as long as they helped her enjoy her high school experience.

Even with high-level experience in lacrosse (Northwestern has won seven national championships since 2005), Hiller’s parents do not push her toward the sport, she said, adding that they have been supportive of any sport she has tried.

“It’s amazing to know they’re behind me with what I do,” Hiller said. “They support me so much and know that you don’t have to only do one sport because all the other sports will help you with that sport.

“It’s been amazing having that there for me.”

On the mats this season, Hiller entered state championship weekend with an 18-4 record and breezed through her first two matches, notching a 54-second pin in Round 1 and a 15-0 technical fall in the quarterfinals.

Hiller’s loss in the state semifinals was both an eye-opener and crushing at the same time. The 5-3 defeat was a sudden victory (overtime) against eventual state champ Gabriella Gomez, of Glenbard North, who Collum called one of the top wrestlers in the country.

Competing against girls who are that successful gives Hiller confidence going into the summer where she’ll participate in numerous judo competitions, as well as wrestling tournaments, including Fargo Nationals, the nation’s top wrestling competition.

And if history tells us anything, Hiller will hold her own.