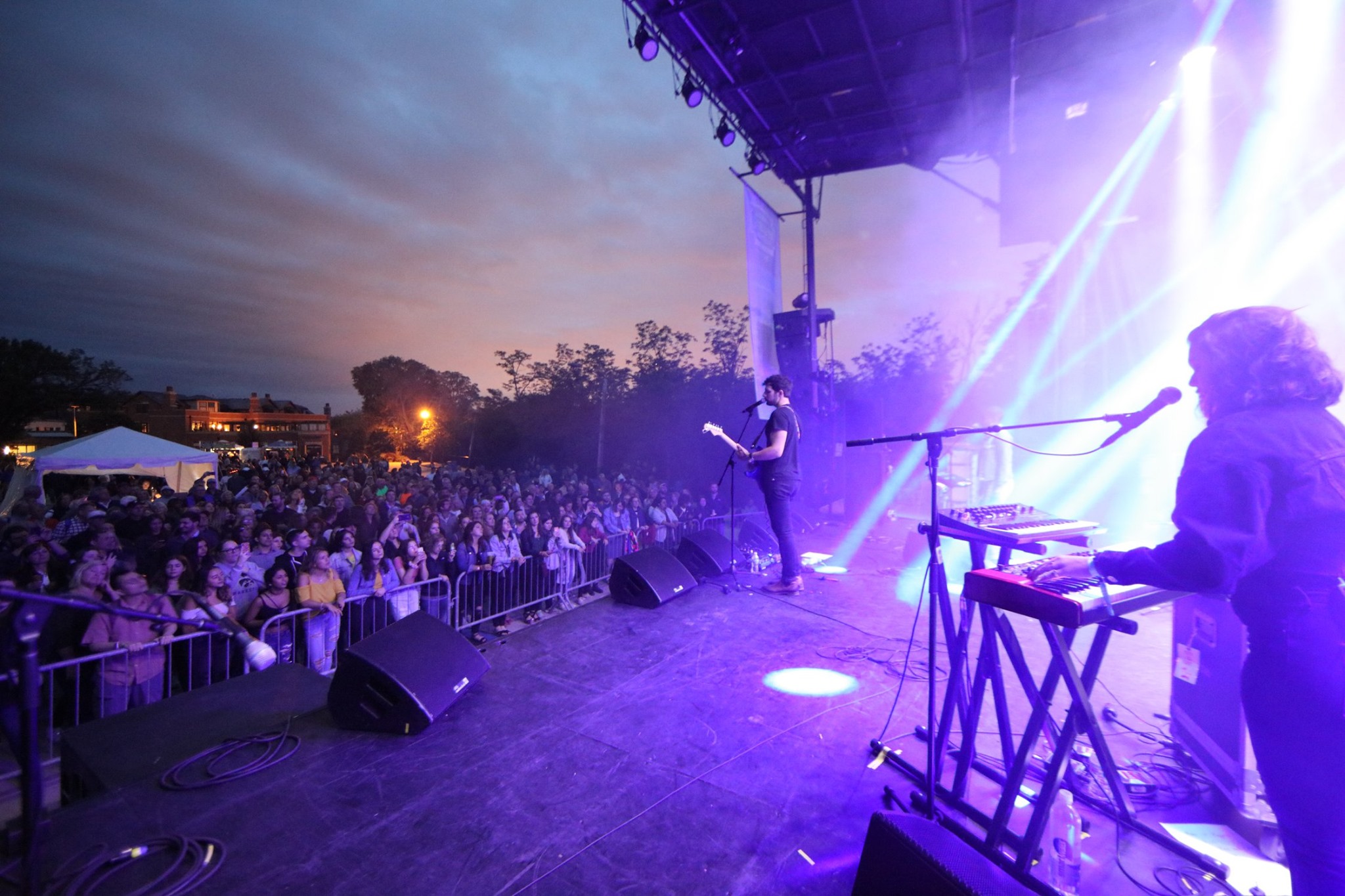 Music fans enjoy the show during the 2019 version of the Winnetka Music Festival. | PHOTO SUBMITTED

The Winnetka Music Festival is back in a big way.

After a year off (2020) and a year with a different name and location (2021), the local music bash is making a grand return to downtown Winnetka with its most celebrated artist to date: Guster.

The popular Boston-based rock band will highlight a one-night, four-stage concert on June 18, the Saturday of Father’s Day weekend, that will also feature The Record Company, a band that event organizer Val Haller said she’s been trying to get for five years.

“We have two bigger acts in the lineup than we ever said,” said Haller, the founder and CEO of Valslist Music, the company behind the six-year-old Winnetka Music Festival.

Tickets to the music fest go on sale to the public Friday, March 4. Before then, Haller and her team are hosting a special presale on Wednesday-Thursday, March 2-3, for everyone who has a special presale code. The code will be sent to all those who are signed up to receive emails from WinnetkaMusicFestival.com.

With limited capacity in downtown Winnetka of about 4,000, Haller is encouraging those interested to secure tickets early.

To celebrate the announcement, a kickoff concert featuring the band The Heavy Hours is set for 7 p.m. Tuesday, March 1, at the Winnetka Chapel, 630 Lincoln Ave. Doors open at 6:30 p.m. for the one-hour show, and walk-ins are welcome, Haller said.

The inaugural Winnetka Music Festival was held in 2017 and has grown in popularity with a focus on local talent and community pride.

With that in mind, Haller felt it was important to bring the fest back to its roots after two years of COVID-19 disruption.

“We are bringing everything back to the streets as we originally did in the first four years,” she said.

In the past, the festival has also spread across two days. Haller has plans to return to a two-day show next year, but with the major acts, one day was the right choice for this year.

“We’re also just staying really fiscally responsible at the end of COVID,” she said. “… One day is enough with these acts. We made our talent budget bigger for one day rather than spread it out. it out.

“And we’re back in the streets. Although people loved the (Skokie Playfields) last year, I think our community still loves the streets a tiny bit better to make it more of a community street fest.”

Guster, The Record Company and at least one more band will play the BMO Harris main stage starting at 7 p.m. Other yet-to-be-announced acts will play the Field Auto Group stage by the Winnetka Chapel. The chapel stage is part of a partnership between the Winnetka Music Festival and SPACE Evanston, a performing arts venue.

The festival will also have a stage dedicated to local acts from 3-6:30 p.m. and a kids and family stage from 1-3 p.m.