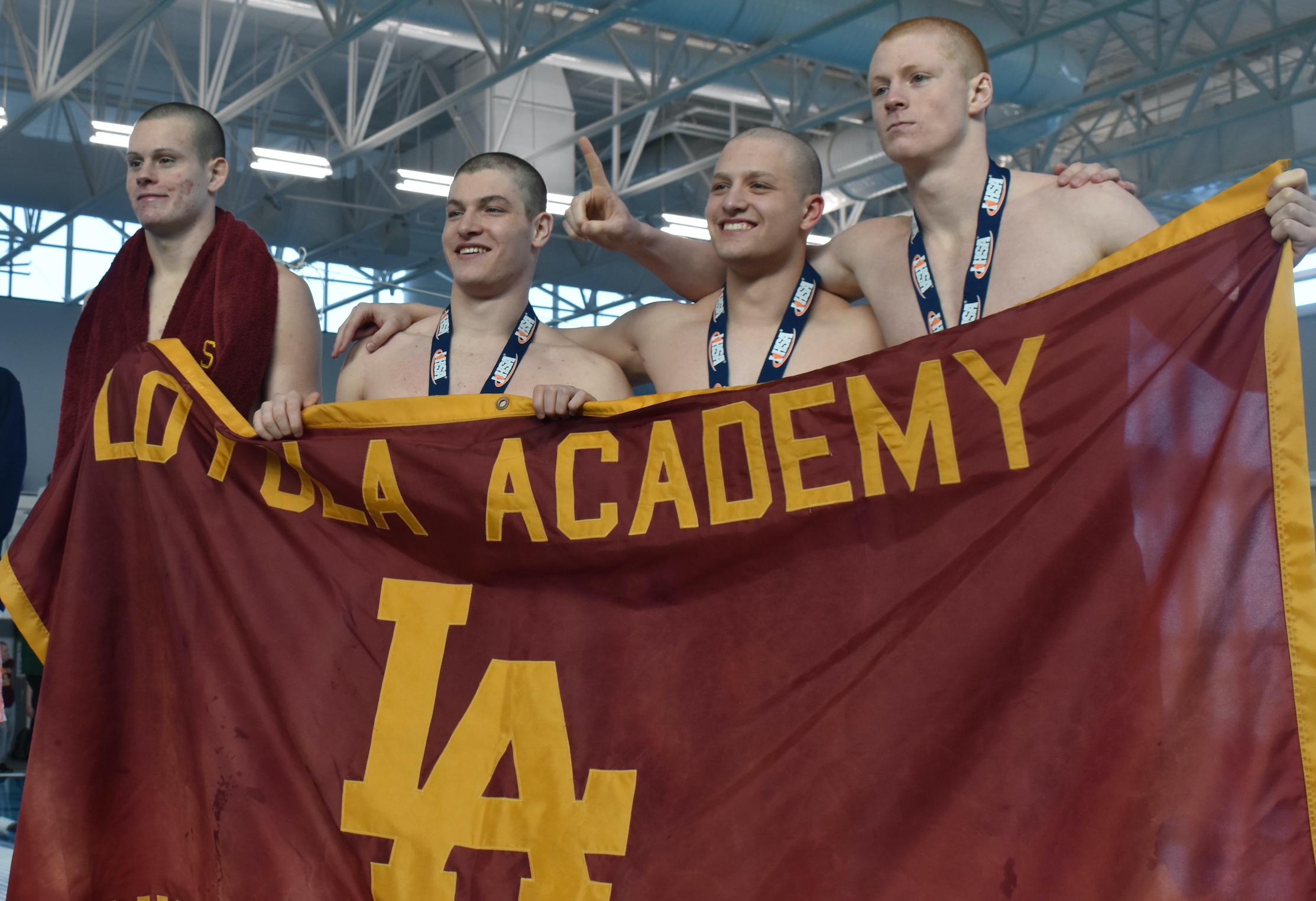 With maroon letters on black material, the Loyola Academy logo is difficult to make out on the Ramblers’ swim caps.

So Andy Kelly let them know.

In celebration mode, Kelly took off his cap and pointed multiple times to the “LA” icon after he anchored Loyola’s all-senior 400-yard freestyle relay to a state championship to end the IHSA state championships Saturday, Feb. 26, at the FMC Natatorium in Westmont.

“I think the most crucial thing for us is we really felt that connection with each other,” Kelly said. “And we were swimming for our coach and our team, not for ourselves, which was the key to our success there at the end.”

In the meet’s final event, Loyola’s relay — Kelly, PJ Spagnolo, Lachlan Andrew and Demetri Zemenides — were the race’s top seed but were well behind the pace after three legs.

Kelly, however, swam a dominant final leg, finishing his 100 yards in 43.99 seconds to erase a deficit of more than a full second. For reference, the state championship time in the 100 free was 44.69 seconds.

Earlier in the meet, Kelly swam a 19.99-second 50-yard split in the Ramblers’ second-place 200 free relay (Kelly, Andrew, Spagnolo and Jimmy Dukes), another mark that was faster than the state champ’s (20.27 seconds). Loyola coach Mike Hengelmann thinks it is the fastest 50-yard split the program has ever seen.

“You couldn’t find a better relay guy than Andy,” Hengelmann said. “He just gets so fired up. I don’t care how far behind we are, we always have a chance with him on the end, which is funny because he’s not one of the big sprinter guys.”

The Ramblers, who lost plenty of talent from their second-place state squad in 2020, climbed to fourth place with a relatively small qualifying group. Loyola competed in just five events on the weekend, and scored in all five.

Kelly, Andrew and Spagnolo most likely would have scored well in individual events, but Hengelmann said he wanted to prioritize Loyola’s relays and he needed his senior leaders to embrace that strategy.

“It shows the strength of the team and really the pride these guys have in swimming relays,” he said. “Relays are for the team, not for individuals, and they bought in. When I sold them on going for three relays, the three guys, they were all in on it.”

Relays also led the way for New Trier, which advanced entries in all 12 events to the state finals.

Musick and Ward Wilson, both sophomores, racked up the most individual points for New Trier. Musick took ninth in both the 200 free and 100 butterfly, while Wilson nabbed seventh in the 500 free and 12th in the 200 free.

The fifth-place finish is the Trevians best since their state championship in 2018.

“We’re pretty happy,” New Trier coach Josh Runkle said. “This senior class: freshman year, they were 18th, then we were 10th, nothing last year (cancellation due to COVID-19) and then we got fifth. It was a really nice progression.”

New Trier is a perennial IHSA powerhouse, finishing in the state’s top 10 in 21 of 22 state finals since 2000. That span includes eight state championships.

Runkle said his team was riding a high from its Feb. 19 sectional performance, in which the Trevians set five pool records at Highland Park High School. The fifth-place state finish left some of his team bummed.

“Obviously we want to be one of these teams getting a trophy and based on how we performed last week, we felt we could be in the hunt,” he said. “We also had to do a lot just to get here. We didn’t know how some of them would react. We’re still really young.”

New Trier graduates three — Michael, Dienstag and diver John Ervin — from its state team, but nine of the Trevians 12 state qualifiers are underclassmen.

As New Trier watched Stevenson take a celebratory swim in the pool, Runkle said his team is set up well.

“This shows we belong in the top 5 every year and to be honest, I think we feel like we belong in the top three every year,” he said. “For the young guys it’s a really good experience to watch this. That’s why we stay and see this celebration and the pay off for all the hard work. I think it’s good and will have a big impact on these guys.”