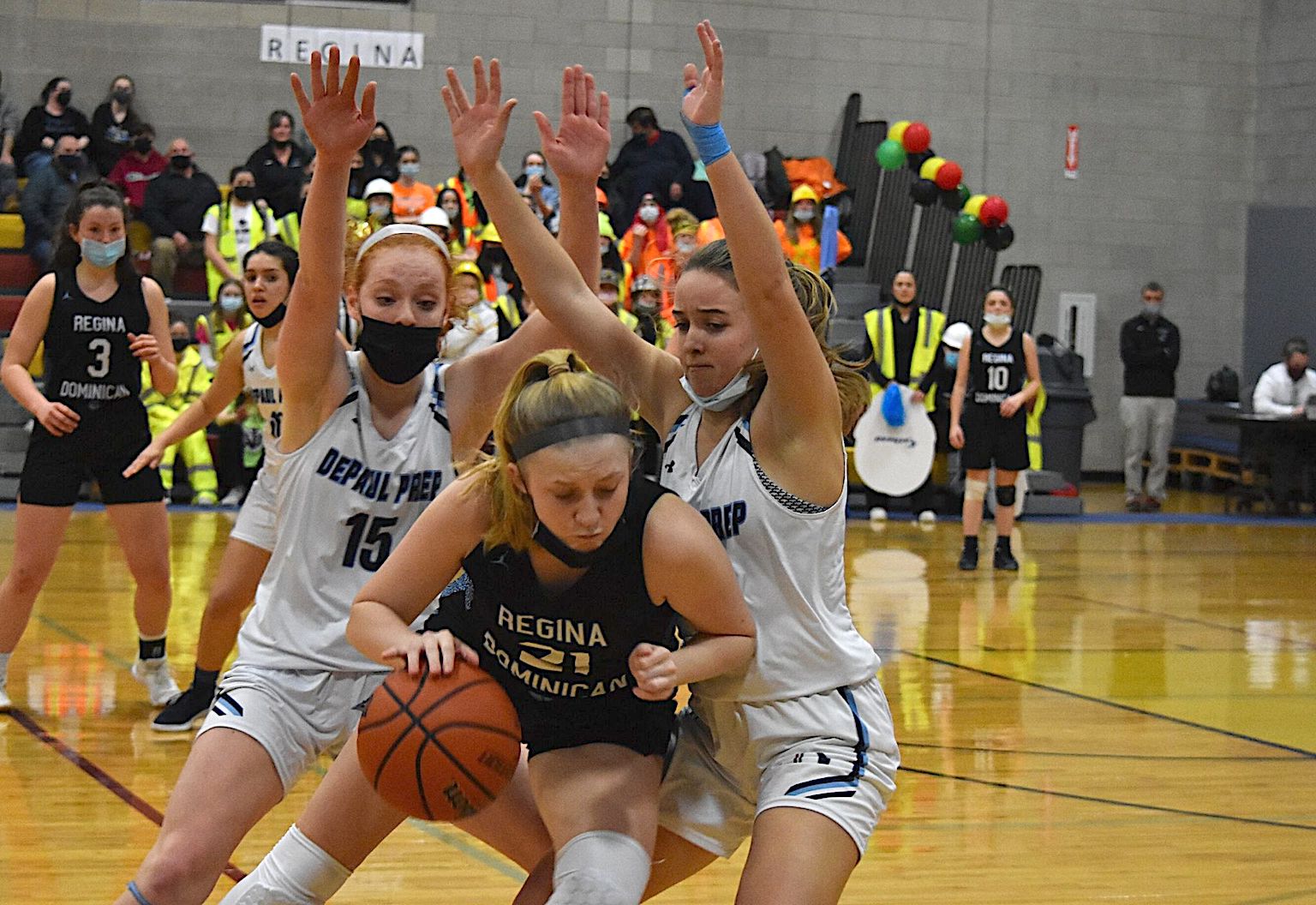 Over the course of the first half, Regina Dominican looked fairly capable in its bid to win an IHSA Class 2A Christ The King Jesuit Prep Sectional title game Thursday, Feb. 24, against familiar conference foe DePaul College Prep.

Unfortunately for the Panthers, DePaul College Prep had a blistering hot third-quarter run on its way to a 54-33 championship victory.

“We knew what we had to do. We had to take away shooters,” Panthers coach Bob Newton said. “We did for a half, and the third quarter got away from us.

“(The loss) helps our younger kids learn, because they didn’t like the way it ended up.”

Bustamante scored 13 of her game-high 23 in the third.

“I’ve had her all four years coaching,” DePaul College Prep coach Sarah Zarymbski said of Bustamante. “I coached her a year on JV and three years on varsity. Seeing her have that moment is fantastic.”

A combination of Bustamante’s shooting and the Rams’ amped up defensive pressure put the Panthers in a bind. DePaul worked its lead all the way to 23, 42-19, before Regina Dominican started to fight back. Jadyn Kosanic also drilled a pair of three-pointers in the third quarter.

Late in the second quarter, Regina’s sophomore guard Payton Olszewski hit a floater and followed it up with an assist to a rolling Maeve Gibbons, who converted from the left block. The Gibbons’ basket made it a 19-16 game, much to the delight of the Regina Dominican student section, which was adorned in neon construction gear and hard hats — and also brought a large traffic cone.

DePaul College Prep scored the last five points of the half, including three free throws and a tough Nora Leadstrom bucket. Sally Roe scored all 9 of her points on three-pointers in the first half.

“It was almost like a comfort level knowing you’re playing a team you know how to play and you’ve been playing against,” Panthers senior Reganne French said. “But it was definitely bittersweet for us because we had lost to them in the regular season, but I think there was a lot of energy and love (on our) team and we wanted to do it for each other.”

Newton said Regina was playing with eight healthy players for the crucial stretch toward the end of the season, and playing in a pressure-filled game is important for the program’s younger players.

“You’re never going to forget it. It’s a lifelong lesson,” Newton said. “We were telling them, it doesn’t matter. Outcomes, everybody got better because they played in this game. Whether you’re a senior or not, you got better for being here.”

Zarymbski had kind words for Olszewski (7 points) and especially French, who scored 8 points Thursday and has led the Panthers all season. She’s coached against French and Regina Dominican throughout French’s four years on the varsity team.

“Reganne’s a fantastic player and I have so much respect for her, just the way she plays and what she brings to the game,” Zarymbski said.

“It’s really rewarding at the end to (hear) good luck in your future,” French said. “I’ve grown up on (the) court basically against these teams.”

French will see a chance to continue to compete after advancing in the IHSA 3-point shootout.

“It’s crazy honestly. This team has been like my family for the last four years,” French said. “It’s weird to think I don’t have practice tomorrow. It’s great the family we’ve created here and even nonbasketball players. We have so many people out her to support us.”

The Panthers (17-14, 1-6 in the GCAC White) won their second regional title (the other in 2019) under Newton and secured a winning record with their postseason run, during which they defeated Chicago Mathematics & Science, Francis W. Parker and Michele Clark.

“We had some teammates who really should be in this who are out of school now because we lost last year so, I think it serves as: Regina’s back,” Newton said. “We’re competitive and that’s been the goal for the last five years for us is to get this program back to where it’s competitive.”