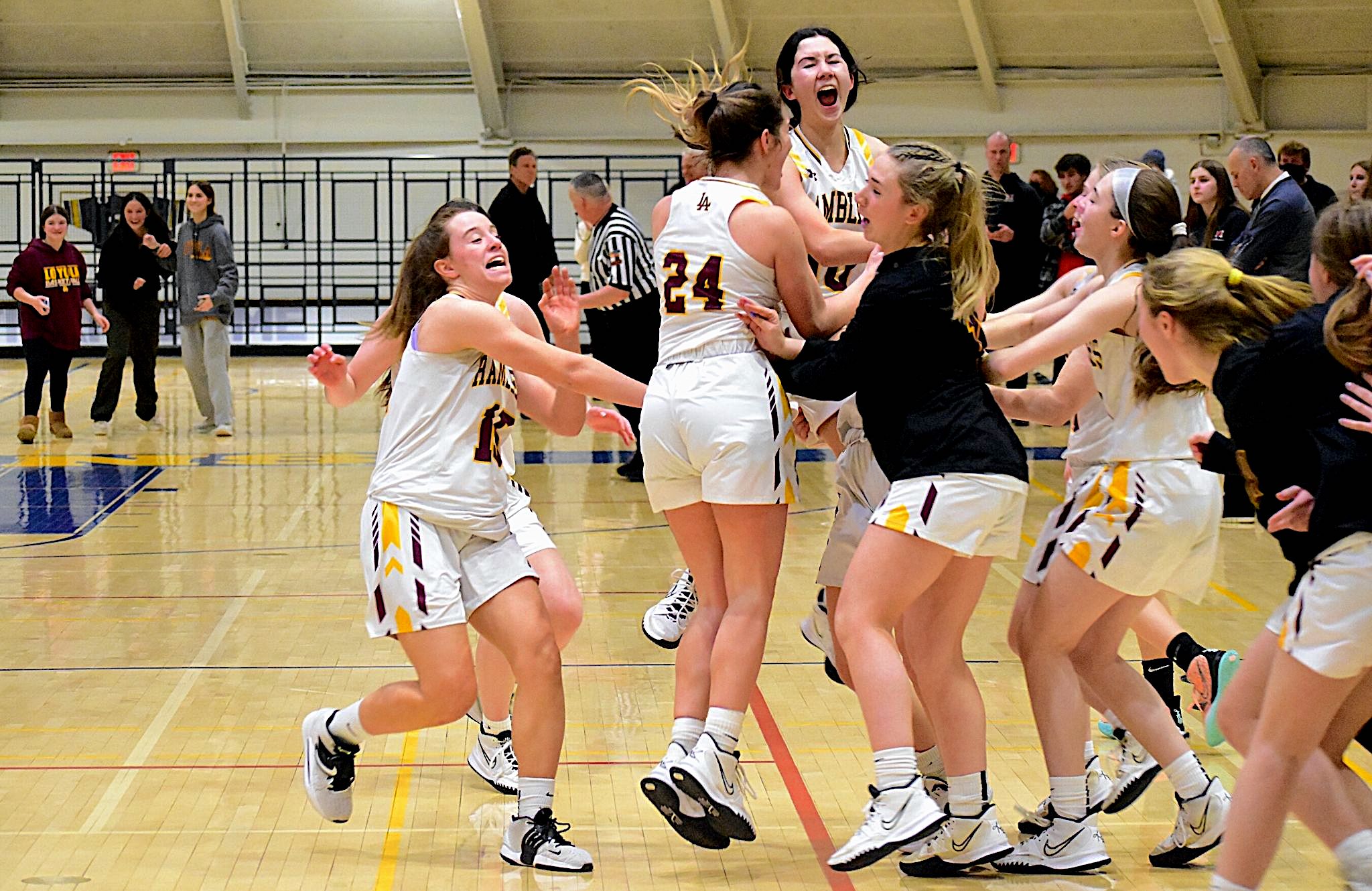 When he laced ’em up, Loyola Academy girls basketball coach Jeremy Schoenecker was a shooter. He knows that when the shots aren’t falling you don’t stop shooting.

He reminded the Ramblers of that mantra after a first half filled with missed shots in the sectional championship.

“We live in the gym. You trust all the work you have done and the preparation you have done to this point,” Schoenecker said. “Playing five guards on the floor, we have to be good shooters. We can attack gaps and do certain things, but we know more times than not we are going to kick out and hopefully get open shots.”

With Maine South nipping at their heels, the Ramblers — and specifically senior Angelina Giordano — found their stroke in the fourth quarter to secure a 42-34 triumph Thursday, Feb. 24, at Glenbrook South High School.

The win gave Loyola a 31-3 record on the season and its first sectional championship since 2005, when the Ramblers went on to the state finals. Loyola advances to the final eight in the IHSA Class 3A bracket and will square off with Stevenson at 7 p.m. Monday, Feb. 28, in the in the Hersey Super-sectional

“I told them this is my 14th year at Loyola and this is my third sectional final,” Schoenecker said. “Know how special that is just to get here. You can make things more special by winning another one tonight.”

To make that happen, Giordano provided the late-game heroics.

The senior sharpshooter, who converted just one field goal in the first three quarters, caught fire, draining three 3-pointers and all four of her free throws in the fourth quarter. The 13-point hot stretch gave her a game-high 18 points.

“I’m not going to hit every shot I take but I always know I am going to make the next one, so just keep shooting,” Giordano said of her mentality. “ … It’s awesome in the fourth quarter, especially when it’s a close game, to be clutch and pull through for your team. It’s an awesome feeling.”

While Loyola’s shooting was off the mark in the first half, its defense was anything but.

The Ramblers allowed just four field goals and 12 points to the Hawks in the half, while forcing seven second-quarter turnovers en route to a 17-12 lead at the break.

Like many games this season, Loyola was battling a significant height disadvantage. The Hawks’ rotation features five players taller than 5-foot-8, including 6-1 Cornell-bound star Emily Pape.

“We know our strengths and weaknesses and obviously one of our weaknesses is our lack of height,” said Giordano, who is the tallest Rambler starter at 5-9. “So we have to use our ball pressure and speed to our advantage at all points in the game.”

And despite the size difference, Loyola essentially matched Maine South on the glass.

“It’s about knowing where the ball is falling and getting in good position and just wanting it more,” Stanton said. “We went into the game knowing we’d have to rebound. We’ve been struggling with that all season. Maine South is really good at getting offensive boards, so we really prepped for that.”

The Hawks started the second half with Pape, who had three early fouls, on the bench. But they kept going inside, and 5-11 freshman Caitlin Leydon’s four points and four rebounds helped cut Loyola’s lead to one, 19-18.

But Stanton scored two big baskets and added a free throw to keep her team in the lead, 24-20, after three quarters.

In the fourth, Pape was on the attack. She scored eight of her 18 points in the final quarter, but the two times she and Maine South trimmed the lead to two points, Giordano struck from the outside.

“We always want the ball in Ang’s hands,” said Stanton, who finished with 10 points of her own.

Giordano converted four straight free throws to seal the victory and the celebration was on.

The Ramblers bested top-ranked Stevenson (33-2), 56-50, in the early-season New Trier Thanksgiving Tournament. The winner of the rematch Monday is bound for the state finals in Bloomington.

“I think half-jokingly they all (have been saying) ‘state,’ but I think deep down inside they really do believe they can get there,” Schoenecker said of his team. “And we have one more game and we’re going to give everything we have.”