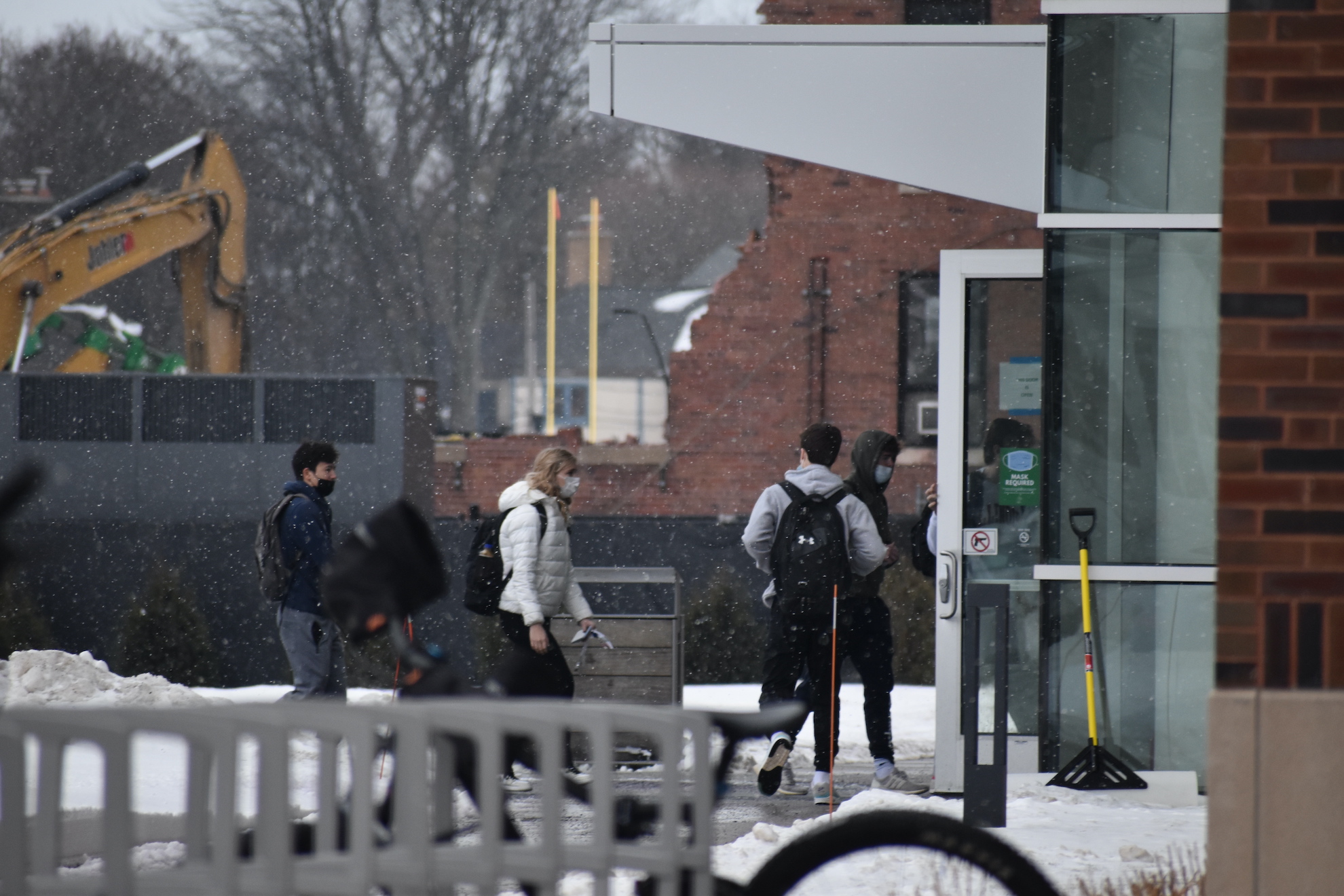 New Trier High School students enter the north side of the building during a snowy day in February. | The Record File Photo

All New Trier area public schools are mask-optional as of Wednesday, Feb. 23.

The districts join area peers Avoca D37, Sunset Ridge D29 and Kenilworth D38, all of which went mask-optional over the last week. Winnetka D36 and Glencoe D35 have been mask-optional since early February, when a court ruling halted the state’s mask mandate in nearly 150 districts, including 36 and 35.

Loyola Academy in Wilmette and many area private schools, such as Sacred Heart in Winnetka and St. Joseph in Wilmette, also moved to mask-optional environments this month.

New Trier Superintendent Dr. Paul Sally cited several factors — including local improvement in COVID transmission, high vaccination rates among the school community (96% staff, 92% students), and the accessibility to quality masks and testing — to support his claim that the district was prepared to move away from universal masking.

Sally also said that for weeks district officials have communicated and worked with the “more vulnerable” students and staff members in preparation for a mask-optional environment.

“We’re ready,” Sally told the board members. ” … I would not bring a recommendation forward if I did not think that. I am not saying the pandemic is over. It is not. This is another point in the pandemic that we can shift practices and approach.”

Backing the recommendation, New Trier’s Board of Education was unanimous in its decision to alter the masking policy.

The resolution made clear that as the pandemic evolves the district will continue to re-evaluate its policies, and amid new data, it could reinstate “collective action,” which includes universal masking.

After Sally introduced the measure, 14 individuals spoke during the public comment portion of the meeting. While some pushed the mask-optional policy and others wanted to keep required masking, most of the speakers, including three New Trier students, expressed support for the board of education and its decision-making during the pandemic.

The seven School Board members then took turns offering insight into their impending votes. Most stressed that their support of moving to mask-optional did not indicate they were against masking or that they believed the pandemic was ending.

“Just as COVID has evolved with new variants, the plan has evolved, as the district always said it would,” board member Keith Dronen said.

Members Kimberly Alcantara and Brad McLane made it a point to thank community members for offering “thoughtful” input on the district’s COVID policies. Alcantara said the feedback was a “big part of my considerations.” McLane also made a point to recognize a fraction of the messages sent to district officials that were unproductive. McLane called those notes “vile, vitriolic, odious and threatening.”

D39 Administration placed two measures on the agenda: a mask-optional policy and a Wednesday, Feb. 23 start date for the policy.

The board members discussed the measures before listening to about two hours of public commentary. While most speakers favored a move to mask-optional, the session featured passionate — and at times emotional — arguments about when to execute the strategy.

The board was also divided. After public comment, the board approved the mask-optional policy with a 6-1 vote. Bonnie Kim dissented. In a more contentious vote, the board voted 4-3 for the immediate start of the policy on Feb. 23. With members Kim, Lisa Schneider-Fabes and Erin Stone dissenting, the decided vote came down to Board President Amy Poehling, who fought back tears in her closing comments.

“There is recognition that this is a significant change and we’re going to do this together as a community,” she said.