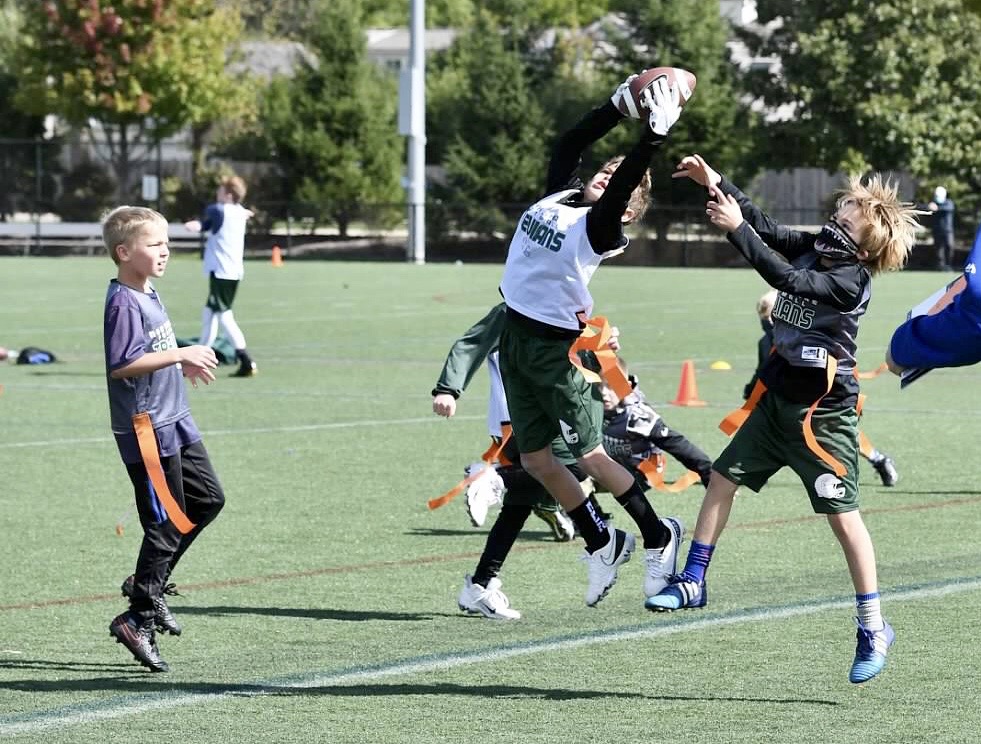 You have to be quick to play in the NorthShore Trevians youth football program.

But it’s not on-the-field quickness you need. It’s how-fast-can-you-get-to-a-computer quickness that matters.

With nearly 700 participants, the program’s spring flag football league filled in a matter of days, and program leaders expect to set a new record for fall tackle competitors, as well.

The Northshore Trevians are the result of a series of consolidations to the area’s youth football scene over the past few years. Prior to 2015, the area was served by the Winnetka Green Wave, Wilmette Eagles, Wilmette Catholic and Glencoe Trevians. Glencoe morphed into the Northshore Griffins, while Winnetka and Wilmette joined forces to become the Jr. Trevians in 2016.

The current iteration, the Northshore Trevians, is the result of a 2018 merger between the Jr. Trevians and the Griffins and players in the TCYFL, the nation’s largest independent youth football league. Wilmette Catholic, which primarily comprises students from Winnetka and Wilmette Catholic grammar schools, remains active and competes against similar area programs.

At first, the Northshore Trevians offered tackle and flag options in the fall. Amid the COVID-19 pandemic, the organization switched to flag-only in the fall of 2020 and saw numbers sky-rocket to more than 700 participants. The influx of participants has held for the Trevians ever since, and this spring, the program had to start a waiting list for its sold-out flag league, which serves kindergartners through eighth-graders.

Registration is also open for the Trevians fall tackle program, which is open to children aged 7 to 14 and split into six divisions. Teams are capped at 20 players, and the season begins in August. Prawdzik is expecting about 200 signups, which would be a Northshore Trevians’ record.

Mike Leonardson signed his 10-year-old son up for a recent tackle season and can proudly vouches for the program.

“We only wish we had learned about the program sooner,” he wrote to the Trevians. “My son has tried about every team sport you can imagine, but never found the right fit. One season of tackle football has literally transformed him, both mentally and physically.

” … My wife was initially concerned with safety, but the program’s commitment to the safety and well-being of our children was robust and evident during practice and in games.”

About a decade ago, amid medical discoveries that connected chronic head trauma to contact sports, youth football was experiencing a crisis in numbers, one that had many experts saying the sport in its traditional form (tackle) was dying out. Numbers declined quickly, and when parents did enroll their children in football, it was at an older age than in the past.

In recent years, however, participation loss in youth football has steadied, and in the New Trier area, it even improved.

According to Prawdzik the Northshore Trevians are committed to safety, which works best when children begin playing at an early age.

“The younger you bring them in, the earlier you teach them to do things the right way, the safer the game is going to be,” he said.

Local parent Rob Russell played football growing up and understood the risks of his children playing — until he watched a Trevians practice.

“I don’t think it’s possible to enroll your 10-year-old in the sport without some level of concern over head injuries,” he wrote to the Trevians. “After watching practices for the first couple of weeks, those fears were severely diminished. I am truly amazed at how much has changed in terms of coaching the game over the years! … Kudos, North Shore Trevians, thank you for teaching our kids to play safe!”

The Trevians fielded a team of 7- and 8-year-olds, including three girls, in the fall. The team became the first undefeated team for the program.

Prawdzik said the program’s mission is to introduce players to the sport safely at a young age, and if they enjoy it, prepare them to play at the next level: New Trier High School.

“Everything we do is geared toward trying to do that,” he said. “The other thing we know is you have to start them young. Competition in youth sports is crazy. … One of our challenges is if we don’t get kids at a young age, we may lose them to another sport.”

“If we get ‘em young and develop them, we’re going to have some dang good football players come through New Trier in the years to come.”

With the growing, though, comes the pains.

Northshore Trevians practice and play at Skokie Playfields in Winnetka, but they have to stagger their teams to make it work. Prawdzik said because of the increased numbers the team is looking for another home, as well as more volunteer coaches for both tackle and youth leagues.

For more information on the Northshore Trevians, you can visit their website or email Prawdzik (tackle) or co-director Melissa Mastros (flag).