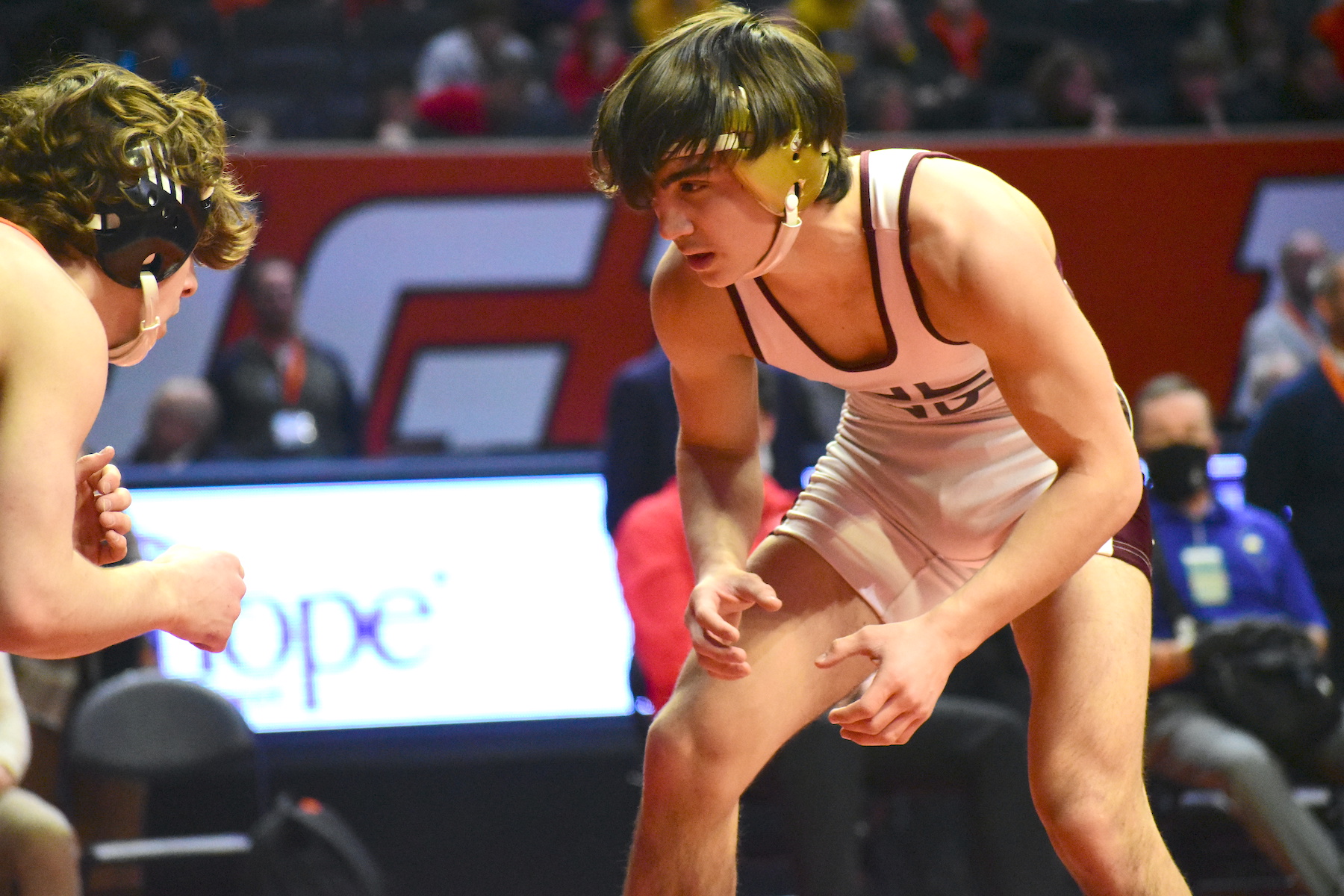 Massey Odiotti’s championship match did not have the desired end, but he made history before it began.

With a third-period pin in a 120-pound semifinal bout, the Loyola Academy junior became the first wrestler in program history to advance to the state championship.

Odiotti enjoyed the honor — just not for long.

“It was big — not only for me, but for the school,” he said. “But there is a lot more I have to work on. I didn’t even come close to winning that (match) so I got to get ready for next year.

“Loyola is headed in the right direction.”

A sectional champion, Odiotti brought a 37-4 record into the IHSA’s state tournament, which was held Thursday-Saturday, Feb. 17-19, at the State Farm Center on the campus of the University of Illinois in Champaign.

He was a favorite to take the medal stand. But he did more than that.

Odiotti began his tournament with a victory by technical fall (16-1) and followed it up with a 13-1 major decision over Daniel Aranda, of Dekalb, the eventual fourth-place finisher.

The quarterfinal victory assured Odiotti of a top-six finish and a medal, but he made school history when he pinned Joey Malito, a 44-1 wrestler out of Lincoln-Way Central, in the the third period of a semifinal match on Friday, Feb. 18.

The triumph put Odiotti in the March of Champions, a beloved tradition at the IHSA championships on Saturday night. In the event, the state-title contenders and their coaches from all three classes are guided around the championship mats by a group of special grand marshals. Each state championship matchup is then announced, and the competitors shake hands in the center of the ring before the wrestling begins.

In Odiotti’s match, St. Charles East sophomore Ben Davino (37-1) came out firing and finished his dominant state run with a 19-4 win over Odiotti.

The Loyola junior said Davino kept him offguard and away from his strengths.

“He just pushes the pace really hard,” Odiotti said of Davino. “I couldn’t really keep up with it. He’s quick and doesn’t really slow down.”

Despite the loss, Odiotti’s ascension is a microcosm of his team’s.

Loyola Academy had three wrestlers compete at the state tournament: Odiotti, senior Cooper Wettig (160) and sophomore Quinn Herbert (170).  The three qualifiers are the most ever for the Ramblers, whose only other placer in school history — outside of Odiotti — was Michael Paloian (sixth, 182) in 2012.

This season, Loyola made waves in the potent Chicago Catholic League, enough so that the conference named third-year coach Matt Collum the league’s coach of the year.

“It’s exciting. We’re building something special at Loyola,” Collum said. “We want more. We’re going to continue to keep building. We’re happy about it but not by any means content. We have to keep working hard to get better. I want to be the best team in the state in a couple years.”