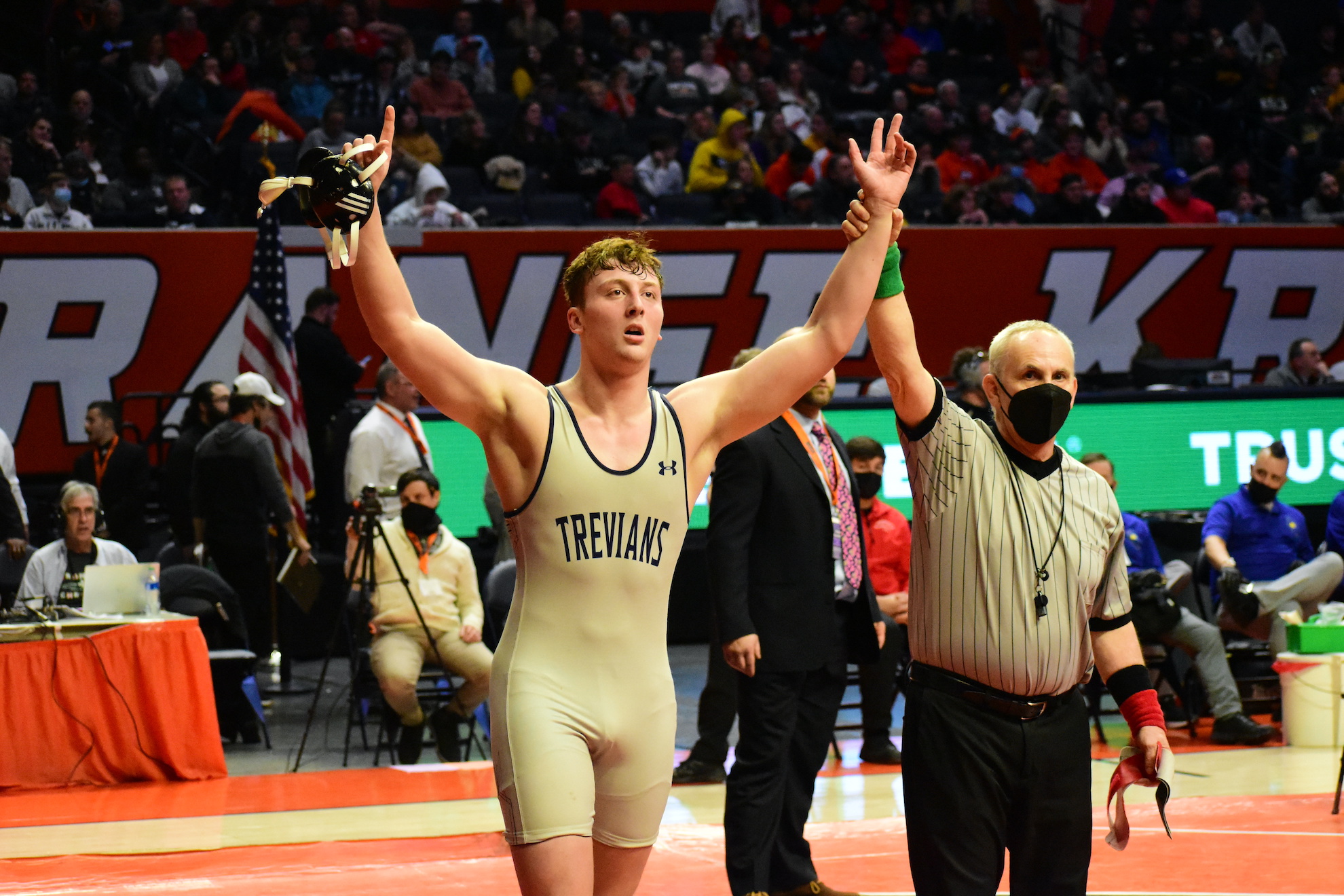 As Jack Cummings collapsed in celebration, it had to feel like deja vu.

The New Trier senior had never wrestled on Saturday of the IHSA wrestling championships, but he had daydreamed about it from the bleachers for about five years.

“I moved here in seventh grade from Kentucky,” Cummings said. “Every single year since then I’ve been coming to this tournament, watching the March of Champions, watching the finals and picturing myself on that mat. Today it happened, and it was just amazing. I am speechless.”

Cummings completed an underdog run through the 195-pound bracket with a 3-1 victory over previously unbeaten Danny Marinopoulos, of Marist, for the state championship Saturday, Feb. 19, in Champaign.

It was the first time a New Trier wrestler won a state championship since 1976, a span of 46 years, when Lee Goldsmith won the 105-pound bracket for New Trier West. A year earlier, New Trier East’s Rick Bickert won a title at 185 pounds. You have to go back another 10 years for the last time a wrestler for the combined New Trier won a state crown: Don Joseph at 103 in 1965.

A third-place sectional finisher on Feb. 12, Cummings was not among the top state seeds in his weight class. Trevians coach Marc Tadelman said his senior leader flew under the radar all season.

“He’s a little underrated,” he said. “I saw a lot of predictions that didn’t even expect him to get in the medal round. He’s been a solid guy for us for four years. We expected this result.”

A third-place sectional result on Feb. 12 meant Cummings had a difficult path to a championship; however, it also meant he did not have to face Marianopoulos — whom Cummings called the toughest opponent in the field — early in the tournament.

Cummings began his championship road with two victories by minor decision — 3-1 over Mount Carmel’s Elliot Lewis and 3-0 over Planfield South’s John Pacewic — to guarantee a spot on the medal stand. He earned his state-final spot by pinning Conant’s Henry Chang early in the third period of the semifinal match.

All four of Cummings’ opponents were medalists in the tournament.

“You have to go through adversity to be the championship and I think I did that,” he said of his sectional finish. “All four of the people I beat here placed in the top six. That says something about the competition I wrestled here.”

In the title bout, Cummings and Marianopoulos grappled to a 0-0 stalemate in the first period.

Cummings drew top position for the critical second period. He clung to Marianopoulos for the entire two minutes, never allowing his opponent to break the hold and gain an escape point.

“Jack works a lot on top wrestling and I think that personally won him the match,” Tadelman said. ” … He’s just a really dominant, top-controlling wrestler. A lot of wrestlers focus on neutral (position), you see it out here every day, but Jack’s good on top.”

The competitors swapped positions for he final period — another advantage for the athletic Cummings, who was a starting running back and linebacker for New Trier in the fall.

Cummings quickly escaped Marianopoulos to tally a point and take the lead. But he didn’t stop there. The senior picked up two more points with an aggressive takedown midway through the period — a risky maneuver given that a Marianopoulos’ counter attack could have flipped the match around.

“That’s what I like to do,” Cummings said. “I don’t like to leave it in his hands to win or lose the match. I wanted to take control, work my offense. If he stops it and reverses it and gets his takedown then that’s on me, but I don’t want to sit there and standing by for his attacks.”

With the 3-0 lead, Cummings allowed an escape point, but fended off Marianopoulos’ takedown attempts to clinch the state championship.

“I’m speechless,” Cummings said. ” … The IHSA 3A title, there is nothing that compares to it in the country. It’s the biggest tournament I think outside of Pennsylvania. It’s the real deal. I am feeling just on top of the world.”

Cummings was joined at state by sophomore teammate Ty Stringer, who finished second at 220 pounds in the sectional round.

Stringer (27-6) won his first match with a first-period pin before falling 22-7 to eventual state champion Andrew Blackburn-Forst, of Lockport. The Trevian then lost his first match in the wrestlebacks 9-3.

After his first appearance on the big stage, Stringer said he is “motivated” to return and make a run like his teammate.

“I really want to come back here and place at least,” Stringer said. “I want to get high up there (as a finisher).

“I need to drill more, be committed. Looking at (Cummings) makes me more motivated too.”

Tadelman said Stringer is one to watch, as evidenced by his first state match in which he put the state champion on his back at one point.

“He’s a very dangerous wrestler,” Tadelman said. ” … He’s got great athleticism and balance. He’s a great wrestler and he’s dangerous. He could have beat anybody in the bracket. He also could have lost to anybody. Hopefully with two more years, we get him up to the top of the medal stand.”