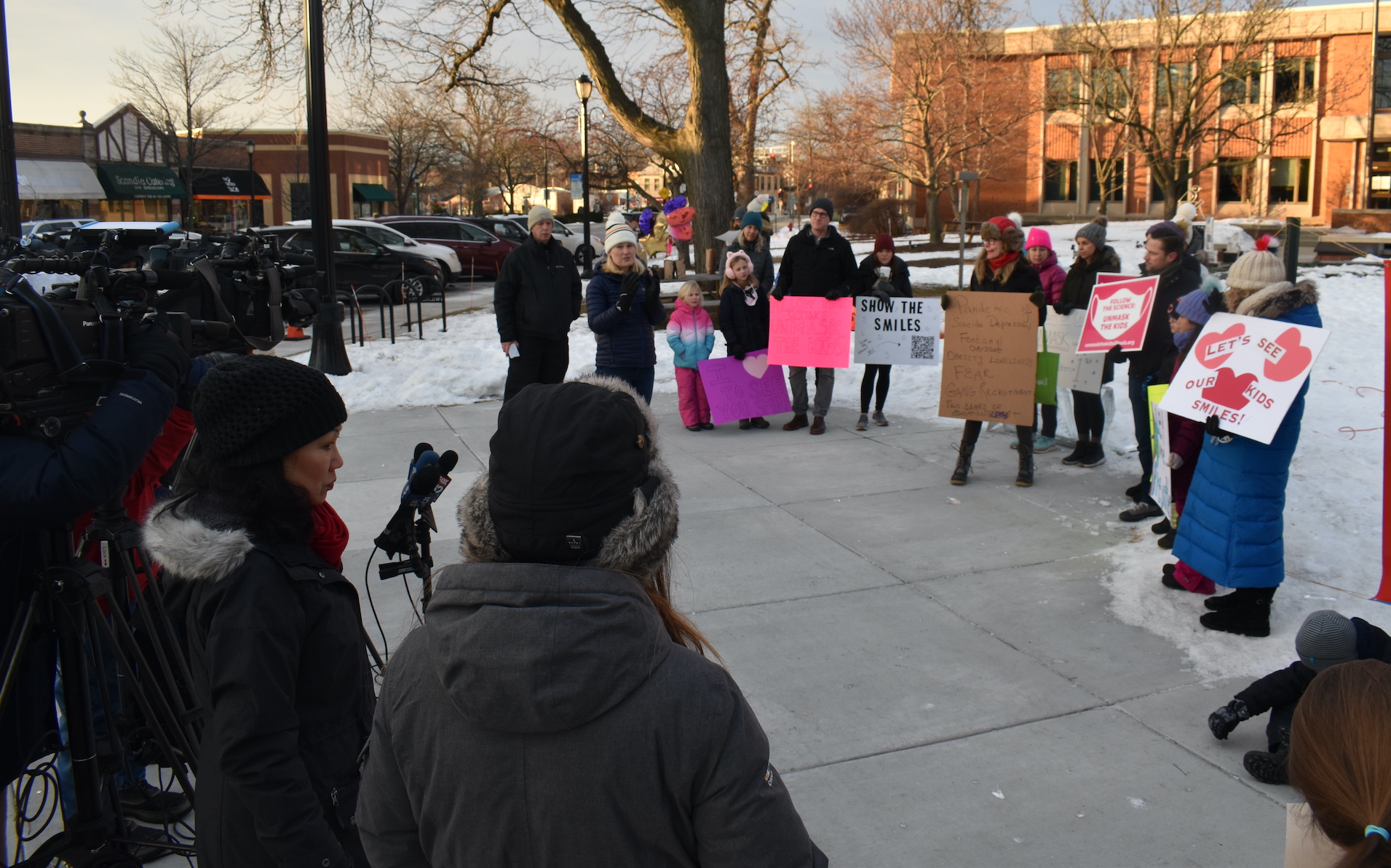 Residents pushing Wilmette Public Schools to shift to a mask-optional policy ramped up their efforts on Monday morning.

About 25 protesters of universal masking in District 39 gathered for a rally near Wilmette Village Hall, while another 15 spoke in front of the D39 School Board’s Committee of the Whole.

School districts across the state have scrambled to respond to a court ruling on Friday, Feb. 4, by Sangamon County Circuit Court Judge Raylene Grischow. The judge issued a temporary restraining order against Gov. J.B. Pritzker’s school mask mandate for 146 school districts named in a lawsuit.

Wilmette D39 — unlike Winnetka D36 and Glencoe D35, both of which moved to mask-optional — was not named in the lawsuit and not subject to the court’s order.

In the wake of the ruling and swiftly declining COVID-19 transmission, however, local protesters are pressing D39 to pivot away from mandatory masking anyway.

“I think it’s time for the board to re-evaluate the mask policy,” said Jim Anderson, a D39 father who was on hand with two of his three daughters. “I think our kids have made sacrifices over the past almost two years in support of public health, but I think we’re at the end of the pandemic.”

The D39 School Board began a four-hour Committee of the Whole meeting at 8 a.m. Monday, just as the rally was ending.

During the meeting, district officials outlined a path to moving to mask-optional, and Superintendent Dr. Kari Cremascoli told the that a resolution will be ready for review at its next meeting, Tuesday, Feb. 22.

At the meeting, the board of education can decide if and when universal masking ends in Wilmette Public Schools.

“The reality is a mask-optional environment is coming,” Cremascoli said. “… We are all eager for this change to be possible and we all look forward to a time when wearing a mask can be optional across all settings, including our schools. … We also recognize that a need for a plan for this transition is critical.”

If district masking changes, Cremascoli reviewed what other mitigations may also change, such as relaxed social distancing and contact tracing.

The district’s legal counsel — Dana Crumley of Franczek, P.C., which also represents New Trier High School D203 — addressed the board about the temporary restraining order and why it does not pertain to Wilmette Public Schools.

Pending appeal, however, the governor’s executive order requiring masking in schools does still apply to D39, she said. The state appealed Judge Grischow’s ruling, and Crumley said a decision from an appellate court could come as soon as Friday, Feb. 18.

Over the next week, Cremascoli said district officials will collect feedback from the District 39 community, which includes parents, students and teachers. The results will be presented Feb. 22 along with a policy recommendation from D39 administrators.

During public comment, 15 district parents against universal masking addressed the board. Some speakers pushed the district to move to optional masking immediately, despite Cremascoli’s request for time to implement any policy change.

Board member Lisa Schneider Fabes asked how much time was needed, and Cremascoli suggested that changes could be communicated and readied within three days of a decision and in time for implementation on Monday, Feb. 28.

“We are very well prepared as a district to follow whatever direction the board sets forth to us,” Cremascoli said, “but giving us the time to communicate that clearly so that everyone knows what to expect is really, really important to me. I think it maintains our ongoing and steadfast commitment to both health and safety and ensuring in-person learning remains in place and predictable for students and staff.”