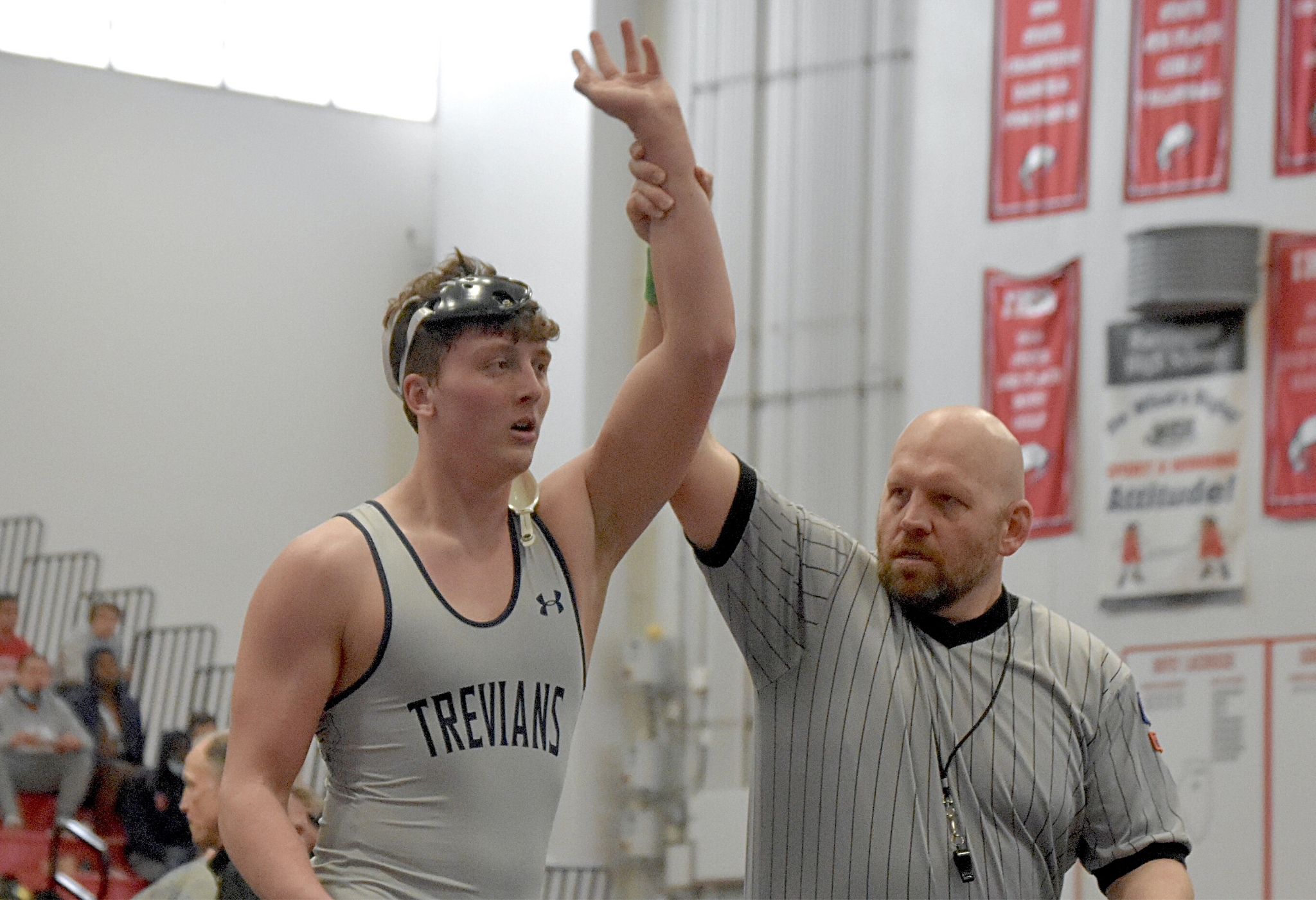 Jack Cummings is recognized after a wrestleback win on his way to a third-place finish Saturday, Feb. 12, in the Barrington Sectional. | Photos by Kaleb Carter/The Record North Shore

Massey Odiotti was plenty familiar with his sectional-title-match opponent, Caelan Riley, of Libertyville.

Odiotti, a Loyola Academy junior 120-pounder, lost to Riley a handful of times before, but also bested Riley earlier this season.

In a bout between familiar foes, it was strategy and execution that yielded the Ramblers their lone sectional champion Saturday, Feb. 12, at Barrington High School.

“The first match earlier in the year was a lot closer,” Odiotti said. “I knew how (Riley) was wanting to wrestle: stay out of my two-on-one, stay away from my ties and wrestle in space. I knew I had to close the distance and not let him wrestle from where he wanted to be. I was trying to get to my ties, close the gap and not let him wrestle from space.”

Of Loyola’s seven male wrestlers to compete in sectional competition, Odiotti (37-4) was the lone champion with his 9-4 triumph over Riley. At the state meet, however, Odiotti will be joined by teammates Cooper Wettig (second place, 160) and Quinn Herbert (fourth, 182).

Wettig (12-2) earned victories by fall and 7-5 decision to advance to the title bout against unbeaten Chris Moore, of McHenry. In one of the best bouts of the day, Wettig dropped a heartbreaker, 5-4, in a tiebreak.

For Odiotti, being ready for state competition means staying mentally strong with such a short turnaround.

He was ready to be back on the mat for practice first thing Sunday morning. The team’s overall performance as of late was an added bonus for the junior.

In addition to Cummings’ and Stringer’s sectional performances, Wilson Wright (120) came up short in the consolation semifinals and went 2-2 on the day, as did Eli Polacek (138). Freshman Walter Garrett (106) also competed for the Trevians.

Stringer’s second-place finish came after wins by major decision and decision before he fell to Hersey’s Many Mejia in the title match.

Cummings (32-3) lost his quarterfinal match by decision and then dominated wrestlebacks, grabbing three straight wins by fall and his third-place match by major decision.

“Jack Cummings, He’s been in high-pressure matches before,” Tadelman said. “He won state in eighth grade. I think his goal is to not just be on the podium, but to win state.

“I wouldn’t see it out of the picture if he finished higher than third at the state tournament if he wrestles his best.”

New Trier’s two standout big guys will carry the Trevians’ torch back to Champaign after no IHSA State Series was held a season ago.

“I’ve been doing this a long time and it matters a little on your bracket placement and luck and what kind of day you’re having,” Tadelman said. “I’ve seen really good kids get knocked out just because of their placement in the bracket and just because of the weight this year,  but I think both of them have a shot.”