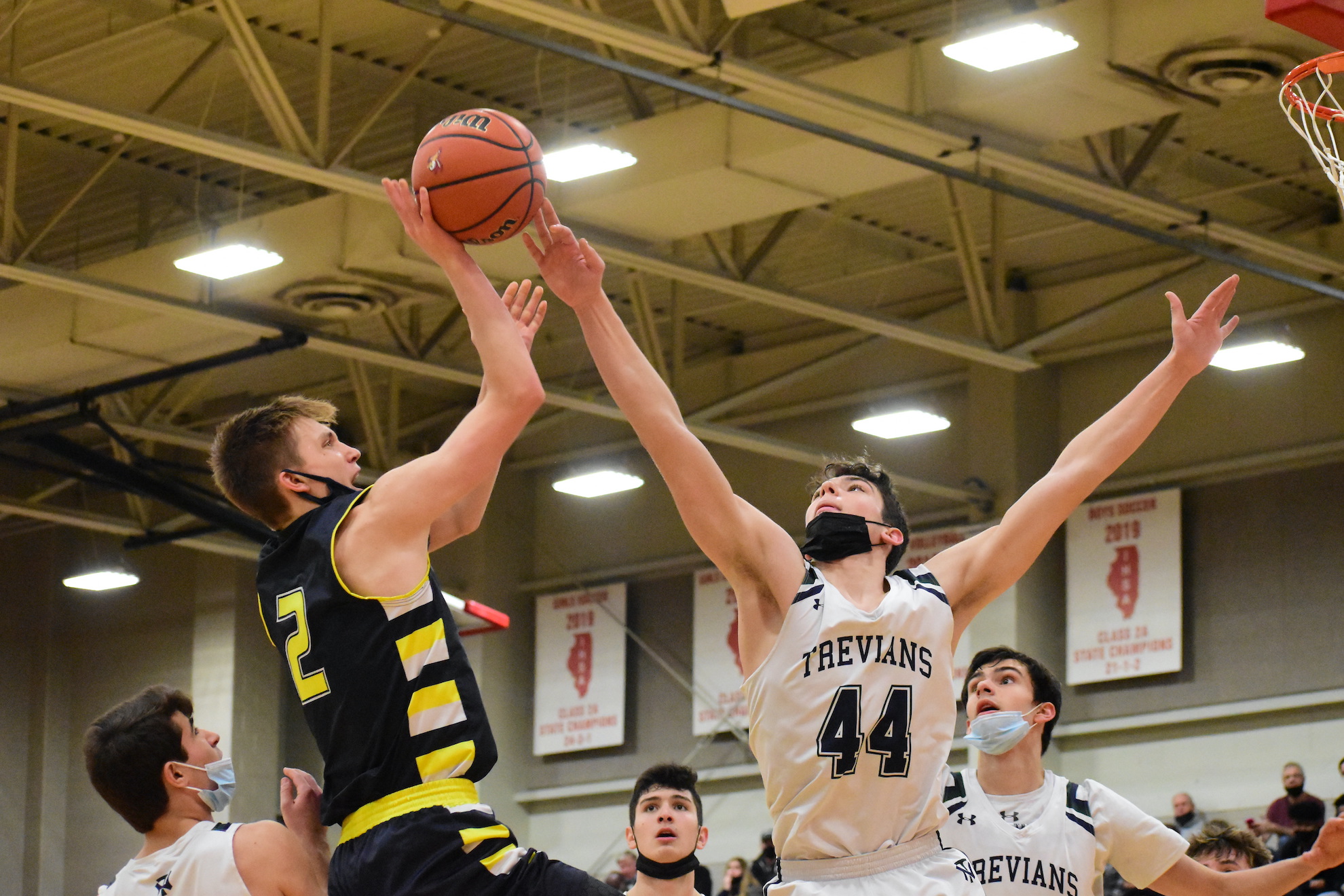 New Trier basketball has plenty of weapons, but the Trevians unleashed a seldom-used Saturday afternoon: a zone defense.

Known for their active, switching man-to-man defense, the Trevians wanted to throw something unexpected at Yorkville Christian and its star Jaden Schutt, a Duke University recruit.

“We got some deflections and some turnovers. I think that changed the game,” New Trier coach Scott Fricke said of his team’s 1-3-1 zone. ” … We really don’t play it much. It’s kind of like a changeup when you’re throwing fastballs … and I don’t think they were ready.”

The Trevians defense sparked a 12-2 first-quarter run that gave them a cushion to hold back the Mustangs and claim a 71-55 victory Saturday, Jan. 22, in the opening game of the star-studded When Sides Collide shootout at Benet Academy in Lisle.

New Trier-Yorkville Christian was followed by top-five matchup Glenbrook South against Simeon (GBS 57, Simeon 54), and then Glenbard West versus Whitney Young and St. Ignatius against Benet.

The Trevians’ defense, whether man or zone, slowed Schutt all night. The star scored 17 points but was just 1 for 7 from three-point range.

“We just really wanted to be physical with Jaden and deny him the ball as much as we could,” New Trier big man Jackson Munro said. “They set a lot of screens for him — we switch screens — so we jumped out high when he’s coming off screens to take him away and force other guys to beat us.”

Coming off a 30-point performance on Friday night, Jan. 21, in a win over Glenbrook North, Murno kept the good times rolling. He scored 10 points in the first quarter en route to a game-high 26.

The Dartmouth commit accounted for 56 points in two Trevians’ victories in a 24-hour span.

“We knew we had a size advantage (Saturday). They’re not the biggest team but they are fast and athletic,” Munro said. “We just knew we could pound it inside and my teammates did a great job finding me in spots to score and I did a good job scoring in the paint.”

Usually the team’s sixth man, Colak was pushed into the starting lineup as the team played this week without shooting guard Josh Kirkpatrick.

Colak found openings early and his activity on both ends of the floor was tough for the Mustangs’ to handle.

“He normally comes off the bench, but he’s a starter … who gives us unbelievable energy,” Fricke said. “He’s a high-level player. He’s going to play basketball in college, but (Saturday) they’re guarding us up in our body, and he’s a guy that can go around people and score.”

Like Munro, Colak also scored 10 in the first quarter, including a buzzer-beating 3-pointer. He added three assists and two steals in the period and finished the game with 17 points, 4 assists, 3 rebounds and 3 steals.

New Trier carried a 17-point lead into halftime, but the Mustangs began to chip away in the third quarter.

Yorkville Christian sped the Trevians up and trimmed its deficit to single digits, before New Trier regained control. Again it was Munro and Colak, who scored six and five points respectively in the quarter.

“We just refocused and got back into our game,” Colak said. “I believe if we play our game and don’t get sped up or slowed down we can win any game.”

Jake Fiegen scored six of his 13 points in the fourth quarter to help seal the Trevians win at 71-55.

On the backs of a six-game winning streak, the Trevians move to 21-2 on the season and will prepare for another big week of action with a matchup Thursday, Jan. 27, against Glenbrook South, which handed New Trier one of its two losses, and on Saturday, Jan. 29, against Rolling Meadows.