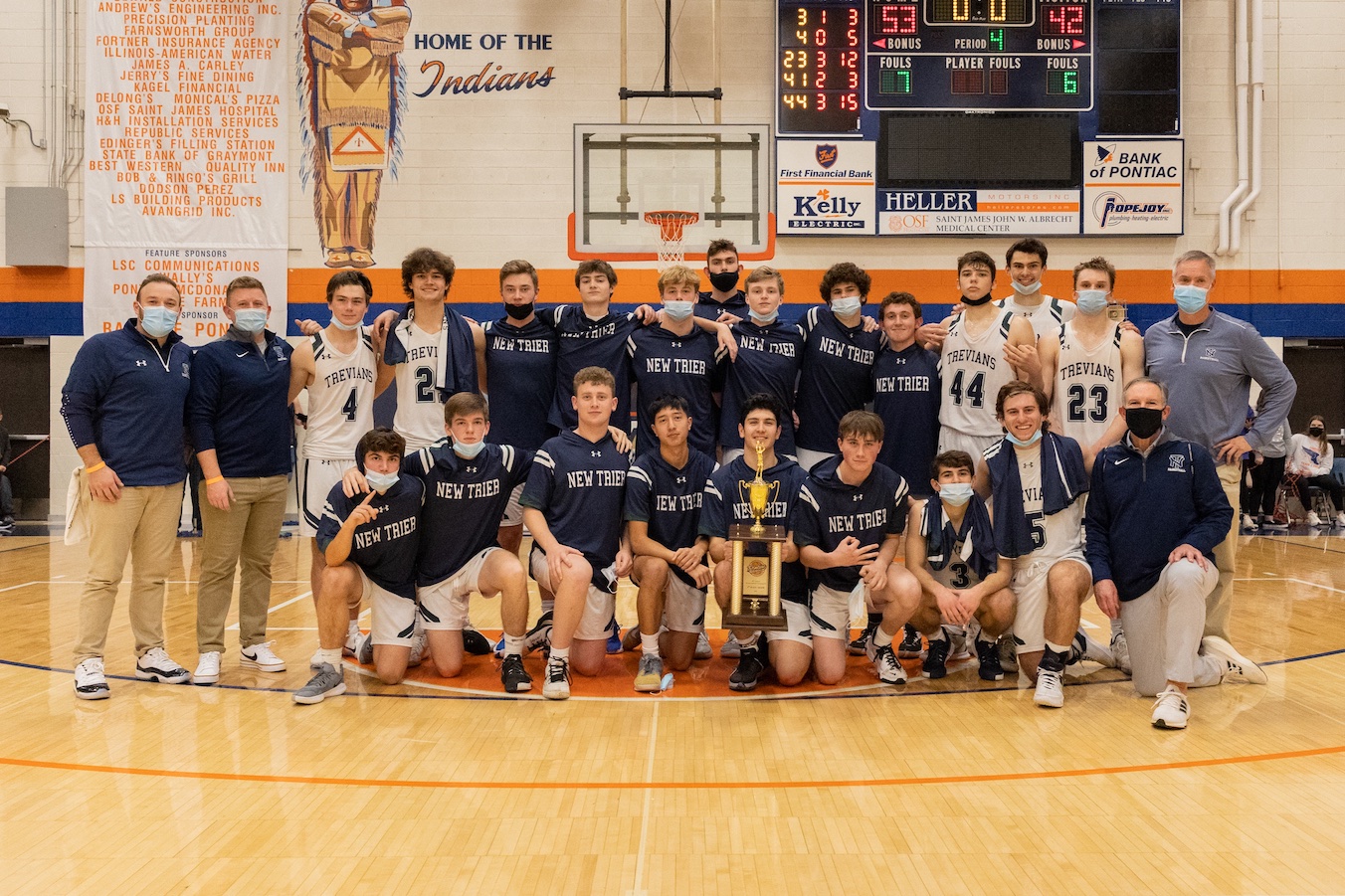 The Trevians pose with their trophy after the third-place finish on Thursday, Dec. 30 — its best finish at the Pontiac Holiday Tournament. | Photo by Rob Lange Photography

Rebounding two hours after a tough loss, especially one as difficult to stomach as New Trier’s overtime defeat against Simeon, is difficult.

But you don’t need to rebound, at least on one end of the court, when all your shots go in.

In the wake of their 69-66 loss to Simeon, the Trevians came out on fire against Benet Academy in the third-place game, draining 9 of their first 12 three-point shots en route to a 53-42 victory Thursday, Dec. 30, at the Pontiac Holiday Tournament.

“Normally it is a tough game (especially) when you go into overtime with Simeon and we played our starters and key players heavy minutes (in that game),” New Trier coach Scott Fricke said. “The game is a lot easier when we are executing our stuff and hitting threes and playing good defense. Everything kind of falls into place.”

New Trier’s first six field goals in the contest were 3-pointers — three of them coming from Jake Fiegen to help his team to an early 20-12 advantage.

Benet’s 6-foot-10 star Kyle Thomas allowed his team to hang around, scoring a game-high 20 points. But the Trevs slowed Thomas down in the second half by denying him entry passes and forcing him into outside shots. He finished 8 of 17 from the floor.

Chasing 10 points, Benet cut New Trier’s lead to six, 42-36, midway through the fourth quarter, but threes from Colak and Shannon and a layup plus a foul from Peter Kanellos sealed the deal.

The third-place finish is the Trevians top result in the Pontiac tournament since rejoining it three years ago. For years, New Trier competed in the Proviso West Holiday Tournament.

Pontiac featured a slew of perennial Illinois powers, including Simeon, Curie, Benet, Bloom, Joliet West and more, and Fricke called it the best tournament in Illinois.

The Trevians bested Peoria Manuel and Aurora West to start the tourney, and topping Benet was a special finish.

“We needed those guys to suck it up and play hard and they did,” Fricke said of his team. “It’s a huge win for us and kind of hidden by the Simeon game earlier in the day. … Third is a nice showing out there. We always get better after we play out there. We come back and we’re better.”

In a semifinal tilt, New Trier took on Simeon, both teams ranked highly in the state and Nos. 3 and 2 in the tournament respectively.

After a rocky start, the Trevians took their first lead, 15-14, on a half-court buzzer-beater by Jackson Munro to end the first quarter.

New Trier took a one-point lead into halftime, but surged out of the break to claim a 12-point lead by the end of the third quarter.

Senior forward Jackson Munro dominated inside all afternoon. He finished with a game-high 23 points to go with 9 rebounds and 4 blocks.

“He was taking it to Simeon,” Fricke said. “He was not being passive, he was being aggressive. … That’s Jackson Munro and that’s what we need. If he plays aggressive like that, we’re tough to beat.”

The Trevs’ lead extended to 15 in the fourth quarter before Simeon began its wild comeback.

Simeon seized the advantage with 2 minutes left to play, but New Trier bounced right back and was up six points with 33 seconds to go.

Simeon’s Jaylen Drake, who had a team-high 22 points, then sank a flailing three-point toss plus a foul to make it a one possession game at 61-59. Simeon tied it up after a steal, and then outscored New Trier 8 to 5 in overtime.

During Simeon’s regulation comeback, New Trier was hit with multiple questionable fouls, including an intentional offensive foul off an inbounds pass.

In the face of the challenges, Fricke was proud of how his team responded.

“We were working against a lot and we were going through a lot of adversity,” he said, “but I love the way our kids responded. They worked their tails off. We had one of the best teams in the state on the ropes. Hopefully it’s a learning experience.”