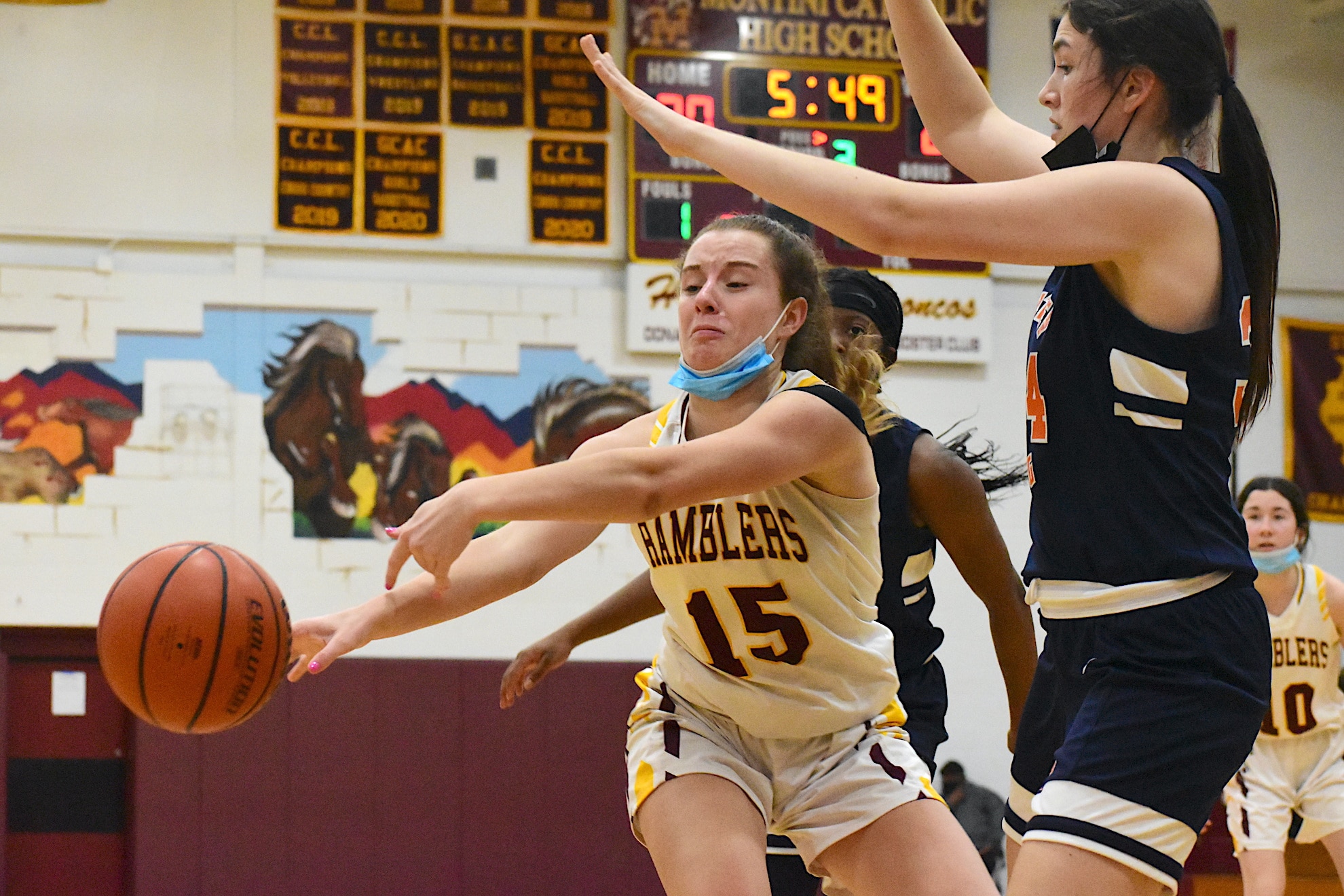 Loyola sophomore Kelsey Langston (15) passes out of a trap during the Ramblers loss to Whitney Young Thursday, Dec. 30, at Montini Catholic in Lombard. | Photos by Joe Coughlin/The Record North Shore

Loyola Academy found the zone Thursday afternoon, but unfortunately for the Ramblers, it belonged to their opponent.

Whitney Young’s zone defense stymied Loyola’s ball-rotating offense, especially in the second quarter when the Dolphins’ 12-0 gave them a lead they never relinquished.

A comeback effort by the Ramblers fell short as they picked up just their second loss of the season with the 50-44 result Thursday, Dec. 20, in their final game at the Montini Christmas Tournament.

“They switch up their defense a little bit and played the passing lanes and we kind of failed to use fakes and other things,” senior Angelina Giordano said. “They are very lengthy and very aggressive and we didn’t work up to that.”

Giordano said the Ramblers haven’t seen much zone defense so far this year and had issues breaking it down.

With four players on the perimeter, Loyola hoped to infiltrate the zone by attacking with dribble drives or passing the ball to its fifth player stationed the lane. The Dolphins weren’t having it, as their athleticism and size denied many Ramblers’ passes and forced more than 15 turnovers.

“We were trying to get into the middle of the floor to collapse them,” Loyola coach Jeremy Schoenecker said. “A few times we were able to do it but it’s hard with their length from the certain spots on the floor that we like to attack from.

“It’s just (about) us getting better at it, finding the soft spots in those zones and making teams collapse in those spots. We just didn’t do a good enough job of getting in the middle of the floor tonight.”

The Ramblers hung in thanks to its own sturdy defense, as well as some timely shots.

Whitney Young then turned on the jets, forcing turnovers and converting regularly on the other end. The Dolphins’ 12-0 run made it 21-16.

“We had a few live-ball turnovers … and missed some open shots, but they did a nice job and hit some tough shots in that quarter as well,” Schoenecker said. “It’s definitely the second quarter that we’d like to forget.”

Loyola sophomore Kelsey Langston buried two 3-pointers in the third quarter to keep her team within striking distance at 35-31.

Young, however, knocked down its free throws (9 of 10 in the fourth quarter) and rebounded (6 rebounds by Tanila Marshall in the fourth) to hold off the Ramblers.

The Dolphins were led by star-to-be Destiny Jackson, a freshman who scored 18 points, and Skylar Jones, a junior forward who tallied 17 points and numerous deflections.

Loyola finished 3-1 in the tournament, which actually morphed into a shootout after multiple teams withdrew for COVID-19-related reasons. The Ramblers topped St. Francis 60-17, Huntley 36-27 and Burlington Central 47-40 prior to Thursday’s loss.

Loyola now heads into its second half with a 16-2 record.

“They play so hard,” Schoenecker said of his squad. “They buy into the defensive side of the floor. … We might be undersized in the post area but that means we have an advantage on the offensive end of the floor and how they guard us. Keep telling our girls that each and every day.

“When we shoot it well, we’re a tough team to beat because we defend every single night.”