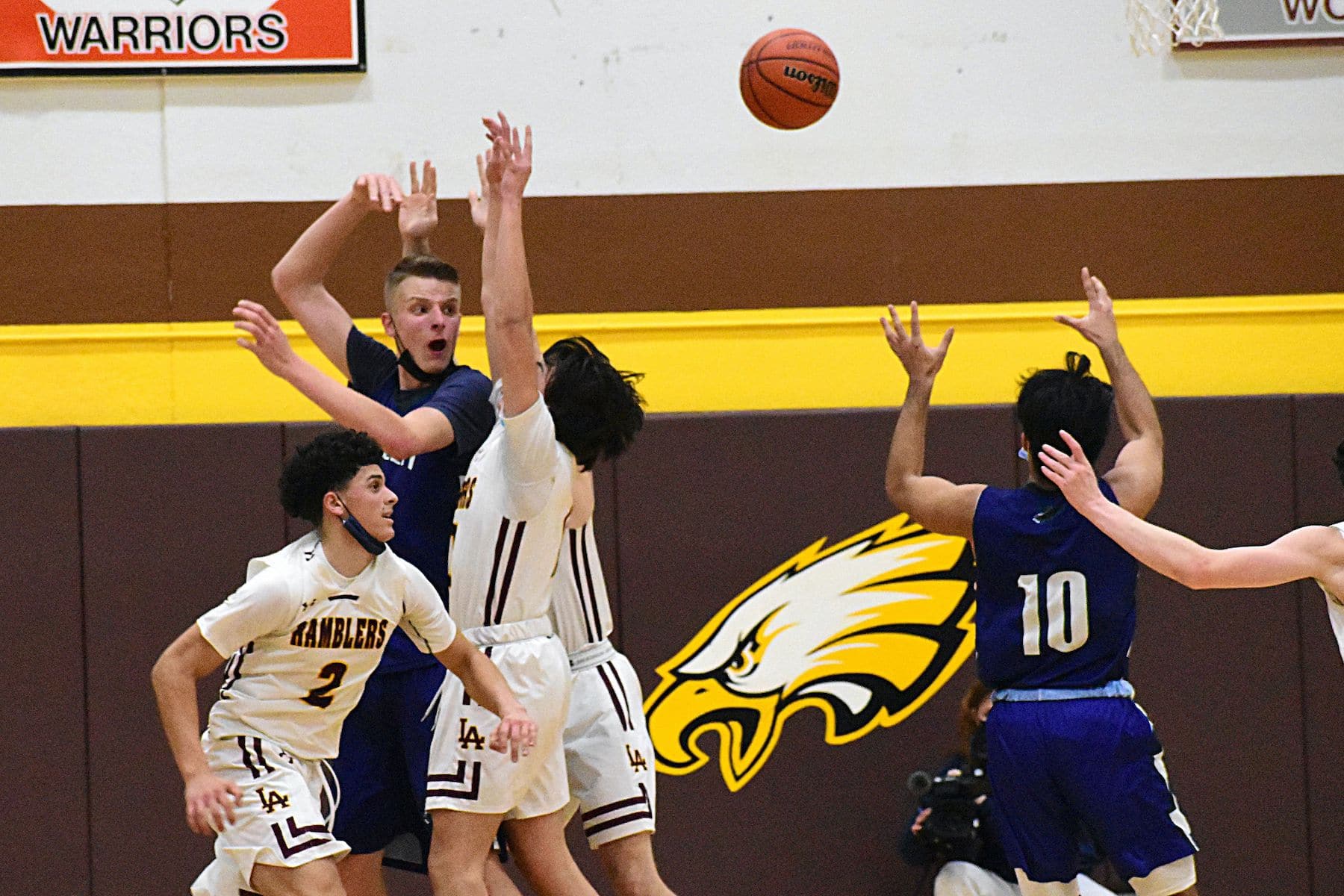 Loyola Academy coach Tom Livatino emphasized his belief in his team by saying in part, “it’s not like the sky is falling,” after back-to-back losses to finish the Hinkle Holiday Classic at Jacobs High School.

While his statement was of course true, something certainly was raining down from above during a 61-40 loss to Bartlett (8-2) on Tuesday, Dec. 28.

Seven-foot-3-inch Conrad Luczynski dropped 30 points on the Ramblers, adding 9 rebounds and 5 assists to lead the Hawks to a third-place finish in the holiday tournament in Algonquin.

“The kid is really, really good. Really good,” Livatino said. “He’s a great passer. He knocks down the three, he scores in the post, he’s 7-3. He’s really good.”

Loyola, which does not have a starter over 6-5, had no answers for Luczynski, who scored at least six points in all four quarters.

Junior guard Alex Engro said the Ramblers did what they could on defense, but Luczynski was quick to put up shots or find an open teammate when he was double teamed.

“We did our best. We tried to double team him, get the ball out of his hands, but he’s a good player. He got the ball up and he scored and passed very well,” Engro said.

On the offensive end, Loyola kept pace with Bartlett in the first half. The Ramblers held a 15-13 lead after the first quarter and trailed by three, 27-24, at halftime.

After the break, however, the Hawks soared ahead by tallying 16 points to just six for the Ramblers.

The Luczysnki effect disrupted Loyola’s offense as well, as a vast majority of the Ramblers’ field-goal attempts were taken from the perimeter.

“I thought we were tentative,” Livatino said. “When there is size or shot blockers on the other team, we haven’t been very good at being able to attack and understand how to play from attacking.”

The loss pushed Loyola to 11-4 on the season and 3-2 in the Hinkle Holiday Tournament.

The Ramblers began the tourney with pool-play victories against Grant (30-25), Streamwood (67-18) and Cary-Grove (57-53) to advance to the championship bracket.

In a hard-fought semifinal matchup on Monday, Dec. 27, Loyola fell 66-54 to Larkin, which ended up besting Barrington 56-51 to win the tournament championship Tuesday night, Dec. 28.

Boland and Engro were named All-Tournament, each scoring more than 60 points across the five games.

Loyola Academy gets more than a week break from game action, next taking the court on Jan. 7, when it hosts Marmion.

Livatino said the team has a number of areas of improvement, but that is typical for this time of year. He expects the Ramblers to come out swinging the second half of the season.

“We’re going to stick with (our top players) and we’re going to be good,” he said. “We’re going to compete and challenge for championships the remainder of the year. Period. Because that’s what we do.”

He added, “It’s not like the sky is falling. The only difference is the players and myself have to become accountable for being better. So that’s a joint effort. … We’ll be back. There’s no doubt about it.”