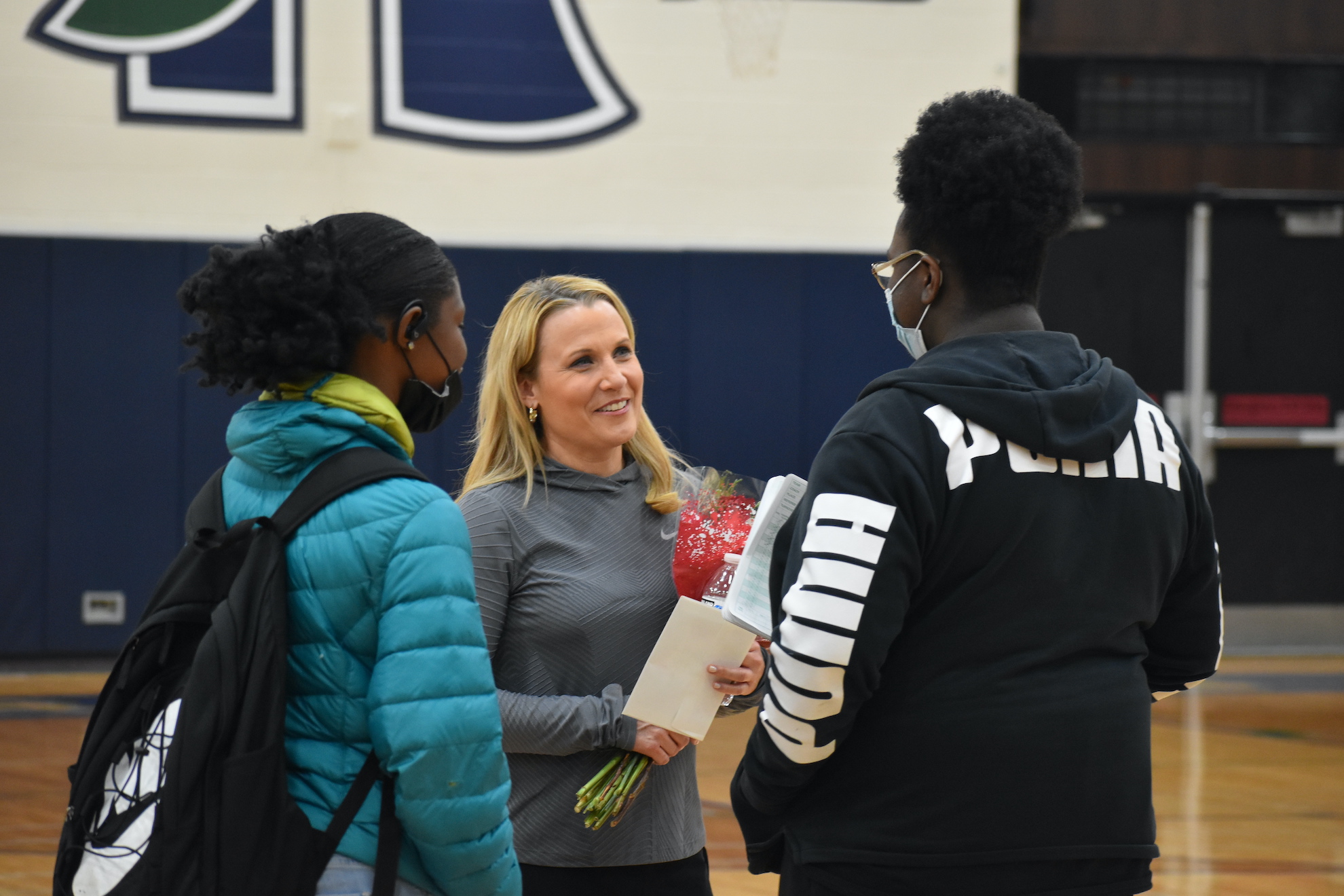 The NBA's Lisa Byington (center) speaks with student-athletes participating in the Grow the Game shootout on Monday, Dec. 20, at New Trier High School in Northfield.

Grow the Game, for the most part, is a symbolic title for a basketball tournament that celebrates the advancement of women in sport.

But the name also works literally.

In Year 2, the event not only doubled in size (from 14 to 29 teams), but it also attracted interest from coaches in other states, according to Teri Rodgers, New Trier’s head basketball coach and one of Grow the Game’s organizers.

The idea for the tournament was developed — as many Chicago ideas are — in a pizzeria.

Rodgers and a handful of Chicagoland women basketball coaches were talking shop, discussing common obstacles they faced as female leaders and how they should and could respond.

“What can we do to support each other, empower each other and we came up with this idea for running a tournament where we highlighted women’s coaches and women officials,” she said.

The event began in 2019, when it was hosted by Glenbard West and coach Kristi Faulkner, one of the founders along with Rodgers, Ashley Luke-Clanton, formerly of Mother McAuley; and Cara Doyle, of St. Ignatius.

A four-day affair, Grow the Game’s second year kicked off on Saturday, Dec. 18, and continued on Monday, Dec. 20, at New Trier’s Northfield campus. Its final two days, Tuesday and Wednesday, Dec. 21-22, are hosted at North Central College in Naperville.

The field includes teams from across the state, such as Lake Forest and Hersey from the northern suburbs, Marist and Mother McAuley from the South Side, Naperville North and Montini from the western suburbs; Providence Catholic and TF North from the southwest suburbs, and Normal University High and Edwardsville from downstate.

Each of the 29 teams in the event is coached by a woman — no easy task considering just 25 percent of Illinois girls basketball programs are woman-led, Rodgers said. All-woman crews also officiated the games.

Originally set up as a tournament and shootout, Grow the Game had to downshift to just shootout games after multiple teams, including New Trier, had to withdraw after members of the respective programs tested positive for COVID-19.

While disappointed, Rodgers said the event’s mission was still intact, and that is what mattered.

“This is really bigger than what we’re doing (as a team),” she said. “I really appreciated that about the coaches. While we are competitive and want to play our best, we all know that that’s not why we’re at this event. We are here to celebrate what we are doing and not necessarily winning. What we’re doing is bigger than the game. The game is just the medium.”

Byington — who grew up outside Kalamazoo, Michigan, and eventually played basketball and soccer for Northwestern University — spoke to the crowd, as well as a digital audience, about her high school sports career, her humble professional beginnings and her barrier-breaking rise to the NBA.

After her speech, Byington hung around the court to take photos with teams and coaches, as well as speak to individuals.

She told The Record that speaking to young women is important to her, and when she learned about the mission of Grow the Game, she was on board.

“It’s all about everything I support,” Byington said. “And part of my story is empowering women and giving women a chance. … Maybe you don’t know that you can be an NBA broadcaster. Now maybe there is a little girl or high school student that now that’s one of their dreams.

“It’s just another way to open up possibilities and encourage women to be their strongest and to be their best and I always look for opportunities to do that.”