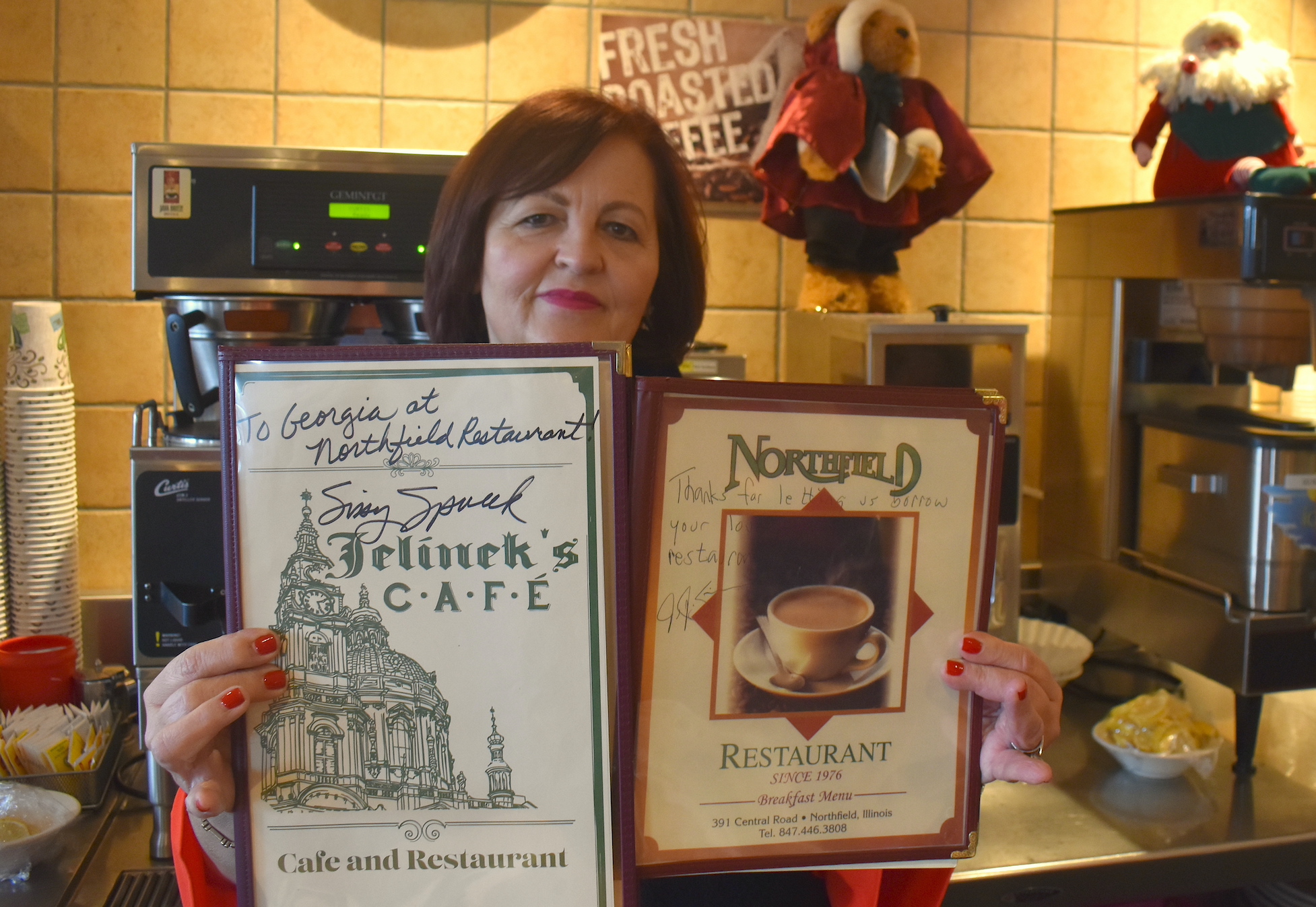 Regulars of Northfield Restaurant were in disbelief when they approached their folksy local diner for three days in June.

A new name was etched on the window: Jelinek’s. What’s that? Are there new owners? Say it ain’t so.

For three days in June and three more in July, Northfield Restaurant became a filming location for the upcoming television series, “Lightyears,” a science-fiction drama from Amazon Studios and Legendary Television.

“(Customers) thought we sold the place,” smiled Georgia Pappas, who owns the diner with her husband, Gus. “After, (the film crew) took the tents and tables down. … It was like nothing happened.”

Northfield Restaurant has served North Shore folks comfort dishes in a throwback dining room since 1976 — all under the leadership of the same family.

Pappas said that in May a couple men with cameras were walking through her restaurant.

When she approached them, they said they were scouting Chicagoland diners for a television show and Northfield Restaurant fit the bill: a mid-1900s vibe complete with burnt sienna upholstery and counter service.

About a month later, the cast and crew took over the diner, changing out wall art, menus, signage and more. Pappas said that the production team compensated the diner and its staff for the multiple days it had to close.

During the shoot, she said, there were about 180 people on-site, including Oscar-winning actor J.K. Simmons.

“He was really, really nice,” she said.

Pappas said it appeared the crew was filming just one scene, in which Simmons’ character was celebrating with his granddaughter.

“All day long for just one scene,” she said. “All day she had to eat strawberry shortcake.”

According to the International Movie Database, or IMDB.com, “Lightyears” is about Franklin (Simmons) and Irene York, “who years ago discovered a chamber buried in their backyard” that leads to a strange planet. The couple long kept the chamber a secret, but a mysterious man shows up and changes everything.

Irene York is played by Sissy Spacek, who has been nominated for six Academy Awards. Spacek joined Simmons in Northfield for the second round of filming in July.

Both Spacek and Simmons signed menus for Pappas and company, and the production crew gifted framed photos and some keepsakes, such as a call sheet, postcard and more

“Lightyears” does not yet have a premiere date.

“It was a very cool experience,” Pappas said. “I’ve never experienced anything like that. … There were people everywhere, and trucks and buses.

“Everything worked out perfect.”

A month or so later, Legendary Television was back, just a town over.

In another Legendary-Amazon sci-fi collaboration, “Paper Dolls” filmed in the fall in multiple locations in Kenilworth.

“Paper Dolls” is a series based on a graphic novel by Brian K. Vaughan and Cliff Chiang in which four girls out delivering newspapers on Halloween get caught in a conflict between groups of time travelers.

The show, which is in post-production, filmed all around Chicago, mostly its suburbs, according to show location manager Nick Rafferty.

“Chicago’s suburbs have always been the backbone of American suburbs, going all the way back to John Hughes,” Rafferty said.

In Kenilworth, he said, the filming was focused on the area around Joseph Sears School, specifically the pedestrian tunnel leading from Pee Week Park to the school.

“It was amazing architectural detail and tile work,” Rafferty said. “That’s what brought us there.”

In “Paper Dolls,” one of the four girls lives in a “really nice suburban community,” he said.  “As soon as I brought the producer to Winnetka and Kenilworth, they said ‘This is where she lives.’”

“The residents really embraced it,” he said during a community event earlier this month. “They came out in droves to watch what was going on.”