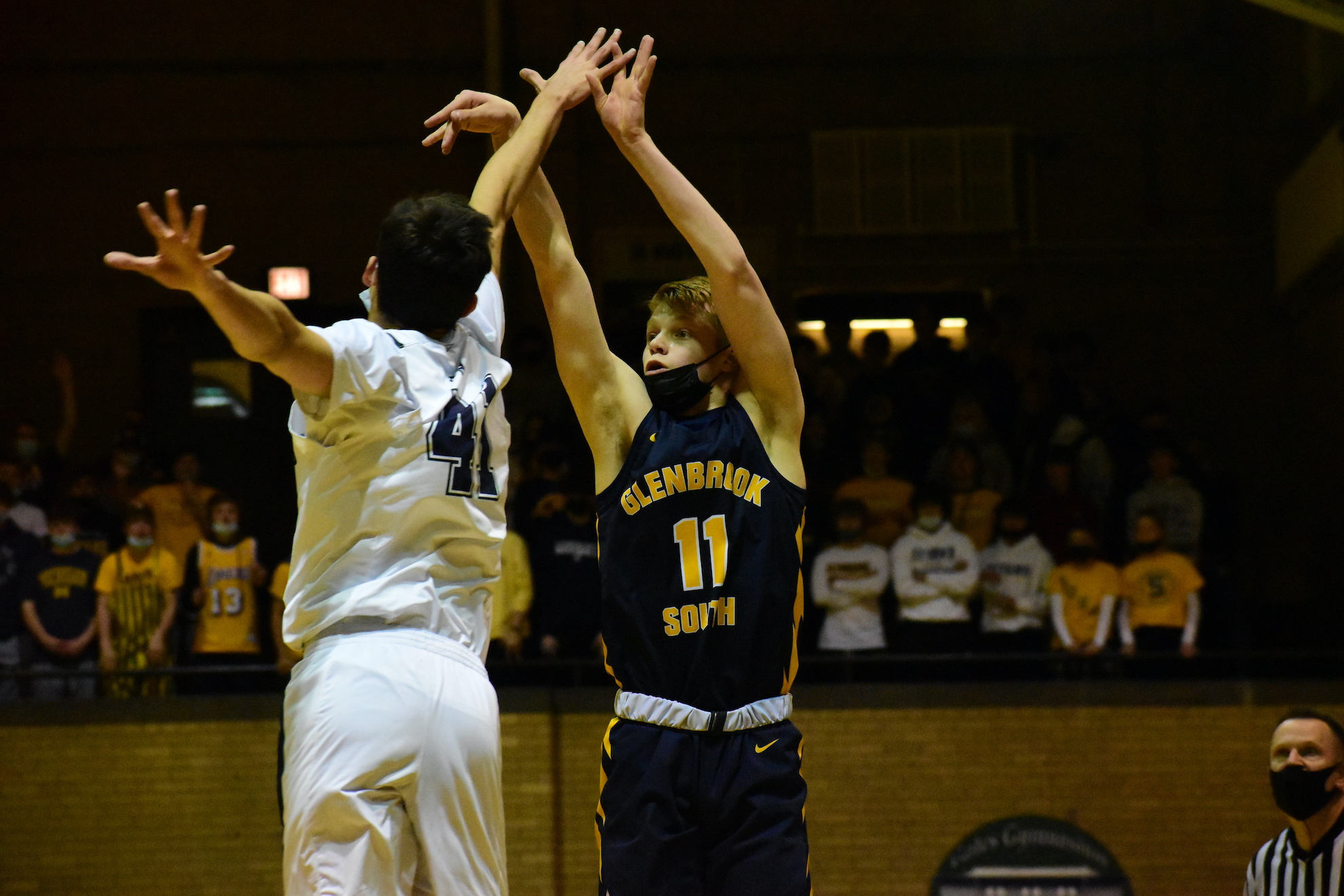 They say the best offense is a good defense, and New Trier has taken that literally this season.

But the Trevians found out on Thursday, Dec. 9, what happens to that relationship when the defense breaks down.

In a pivotal league matchup, visiting Glenbrook South’s shotmaking put a wrench in the Trevians’ transition offense during the 73-53 GBS victory.

“It was hard because our offense is a lot of transition (play) and when they keep scoring, it stops our transition,” junior Jake Fiegen said. “It really slows us down and forces us to execute in the half-course, which we can do, but it’s tough when you’re down so much.”

Glenbrook South exploded in the second quarter, draining five three-pointers in less than four minutes and using a 21-2 run to grab an intimidating 38-17 lead.

The Trevs were forced to play catchup from there and despite a short-lived third-quarter run that cut the deficit to 12, they could not get back in the game.

“They are a very good team and they have showed — when Isaw them play against (top-ranked) Glenbard West — they can play with anybody,” said David Brenner, New Trier assistant coach. “They are a contender for the state championship in my eyes. … They out-executed us tonight. We have high hopes and dreams for this season and we’re going to have to get better to reach them.”

Brenner was leading the way for the Trevians with head coach Scott Fricke missing his fourth straight game for medical reasons. New Trier also played without starting point guard Peter Kanellos and his brother, Evan Kanellos, a guard that is featured in the Trevs rotation. Starting forward Jackson Munro missed practice all week but played on Thursday night.

School officials would not comment on specifics of the absences, but said Fricke and company will return soon.

The rivalry matchup began as expected with the state powers duking it out through the first eight minutes. South’s RJ Davis hit two threes in the quarter — a sign of things to come.

The Titans’ second-quarter barrage was sparked by Cooper Noard and Gaven Marr, who sank two threes after he was left open by a Trevians defense focusing on Noard and Nick Martinelli.

“We had some miscommunications and they capitalized on them,” Fiegen said. “We had three bad switches, and all their players made shots. That’s tough.”

Meanwhile, New Trier’s offense could not find a rhythm off the made baskets. The Trevs also committed four turnovers in the second quarter, leading to even more open opportunities for GBS.

Prior to Thursday night, New Trier was allowing fewer than 40 points a game to its opponent. The Titans led 41-23 at halftime.

“Martinenlli and Noard are amazing and they have a great supporting cast,” Brenner said. “We didn’t get enough stops and they scored too many points. … We didn’t do a good enough job playing defense.”

But after a showstopping, stepback three from Fiegen to cut the deficit to 12 at 56-44, Noard silenced the crowd with a contested three-pointer plus a foul.

In the fourth quarter, Davis buried two more three-pointers from the corner, giving him 17 points and more importantly putting the game away for Glenbrook South.

“Once you go down 20 points, you kind of have to throw a no-hitter the rest of the way,” Brenner said. “Our guys have character. We’re a really good team. You take away your head coach, you take away your point guard and we’re feeling a little bit naked. We’re a better team than we showed tonight, but we’re going to have to prove it.”

Munro, a Dartmouth College recruit, scored just six points for the Trevians, as tough defense from Martinelli and game script kept the ball out of his hands most of the evening.

Martinelli got his throughout the night, scoring six in the first quarter, seven in the second, eight in the third and four in the fourth to wind up with a game-high 25 points.

“I think we got a lot of work to do,” Fiegan said. “We’d rather lose now than in (the playoffs). We’re going to play them again in conference so we’re just going to have to learn from our mistakes.”

New Trier hopes to get healthy, but must travel to South Elgin High School for a matchup with Hinsdale Central in the Storm Shootout on Saturday, Dec. 11.

The Trevians return to league play on Thursday, Dec. 16, with a home tilt against rival Evanston in the final basketball game at historic Gates Gym.