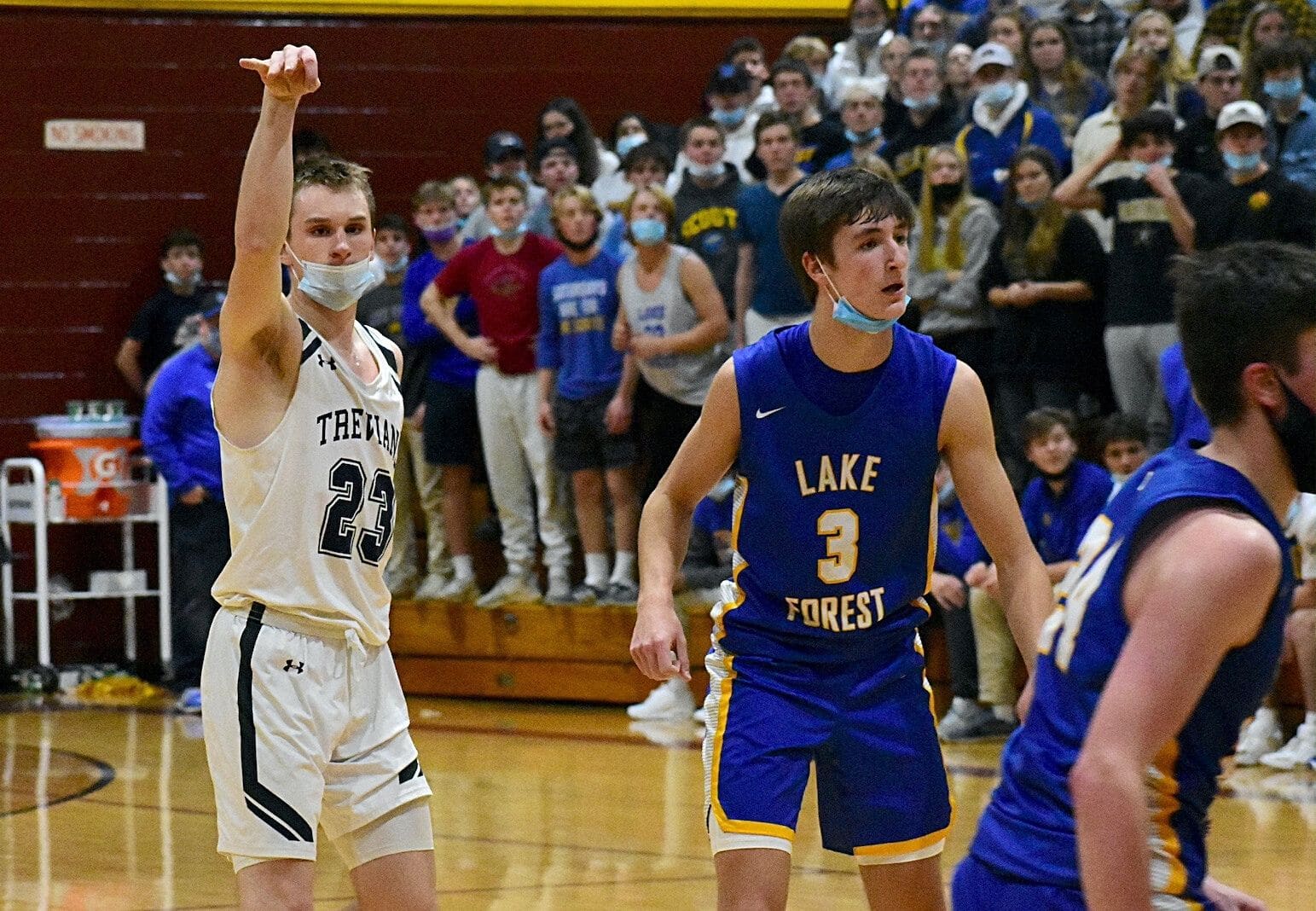 Jake Fiegen holds his release after ending the third quarter with a three-pointer on Saturday, Nov. 27. | Photos by Joe Coughlin/The Record North Shore

After draining five three-pointers, New Trier senior Josh Kirkpatrick wasn’t revealing too much about his secret sauce — except that it’s not a sauce at all.

It’s a game-day smoothie made by his mother, Sara, and its contents are need-to-know.

“It’s a secret to be honest, but it always gets me going,” Kirkpatrick said.

Whether powered by smoothie or a hundred or so pregame shots, Kirkpatrick’s three-point barrage helped his team to a 12-0 lead it never relinquished in a 51-41 win over Lake Forest on Saturday, Nov. 27, at Loyola Academy in Wilmette.

Preceded by wins over Lake Zurich, Butler Prep and Loyola, the victory gave the Trevians the championship of its co-hosted Thanksgiving tournament.

“We’re happy we got to play in a really good Thanksgiving tournament. I don’t know of a better Thanksgiving tournament out there,” New Trier coach Scott Fricke said. “There were four high-quality, ranked teams in there. To start the season with not only winning four games but to beat the quality we did, that’s a good start for us.”

After New Trier’s 12-0 lead, the closest Lake Forest got was 12-7 after the first quarter. The Trevians extended the gap to 24-14 at halftime. The Scouts began to creep back in the third quarter, but junior Jake Fiegen’s two three-pointers held them at bay.

Kirkpatrick buried three threes in the first quarter before receiving the blanket treatment by the Scouts’ defense.

He managed another trey in the second quarter, and only got one more good look. With the Trevs lead cut to seven, 44-37, late in the fourth quarter, Noah Shannon found Kirkpatrick alone in the corner for the game’s dagger.

“We had a play we were running and it kind of broke down and Noah found me in the corner,” Kirkpatrick said. “It was right in front of (our) student section, so I knew I had to wet it and get the crowd hyped. That was really fun.”

Kirkpatrick’s 15 points were second to Jackson Munro’s 19 and ahead of Fiegen’s 8. Munro, a Dartmouth commit, erupted in the second half for 15 of his 19 points. He helped punctuate the victory with three dunks in the fourth quarter.

Lake Forest advanced to the title game thanks to a thrilling 62-60 victory over St. Ignatius on Wednesday, Nov. 24, when star Asa Thomas scored 21 points. A day earlier, Thomas dropped 40 points.

The Trevians held Thomas, a junior who already has a dozen offers to play Division-I college basketball, to 11 points.

Shannon, a 6-foot-5 senior forward, started on Thomas, who sank just one field goal in the first half.

Shannon said the Trevians strategy was to pressure Thomas, so he couldn’t settle into a jump shot. From there, it was a team effort to switch on screens and keep him out of rhythm.

“We were watching film (of Thomas playing) St. Ignatius and he was just lighting them up from three, but they weren’t switching,” Shannon said. “We knew if we got out on him, made him put it on the floor it would be a tough day.”

Outside of Thomas, only two other Scouts scored: Alex Forowycz with 19 points and Sam Gibson with 11.

Munro was named the tournament’s MVP and joined on the All-Tournament team by teammates Kirkpatrick, Fiegen and Peter Kanellos, who had three points and five assists in the title game.

Also on the team were Loyola Academy players John Daguinsin, Alex Engro and Connor Casper. Those three were the leading scorers for the Ramblers in their 51-49 third-place victory over St. Ignatius on Saturday, Nov. 28.

Daguinsin had 18 points, while Engro had 16 and six rebounds and Casper added 12 and five rebounds.

The Trevians move into conference play next week with a road tilt against Maine South on Friday, Dec. 3.