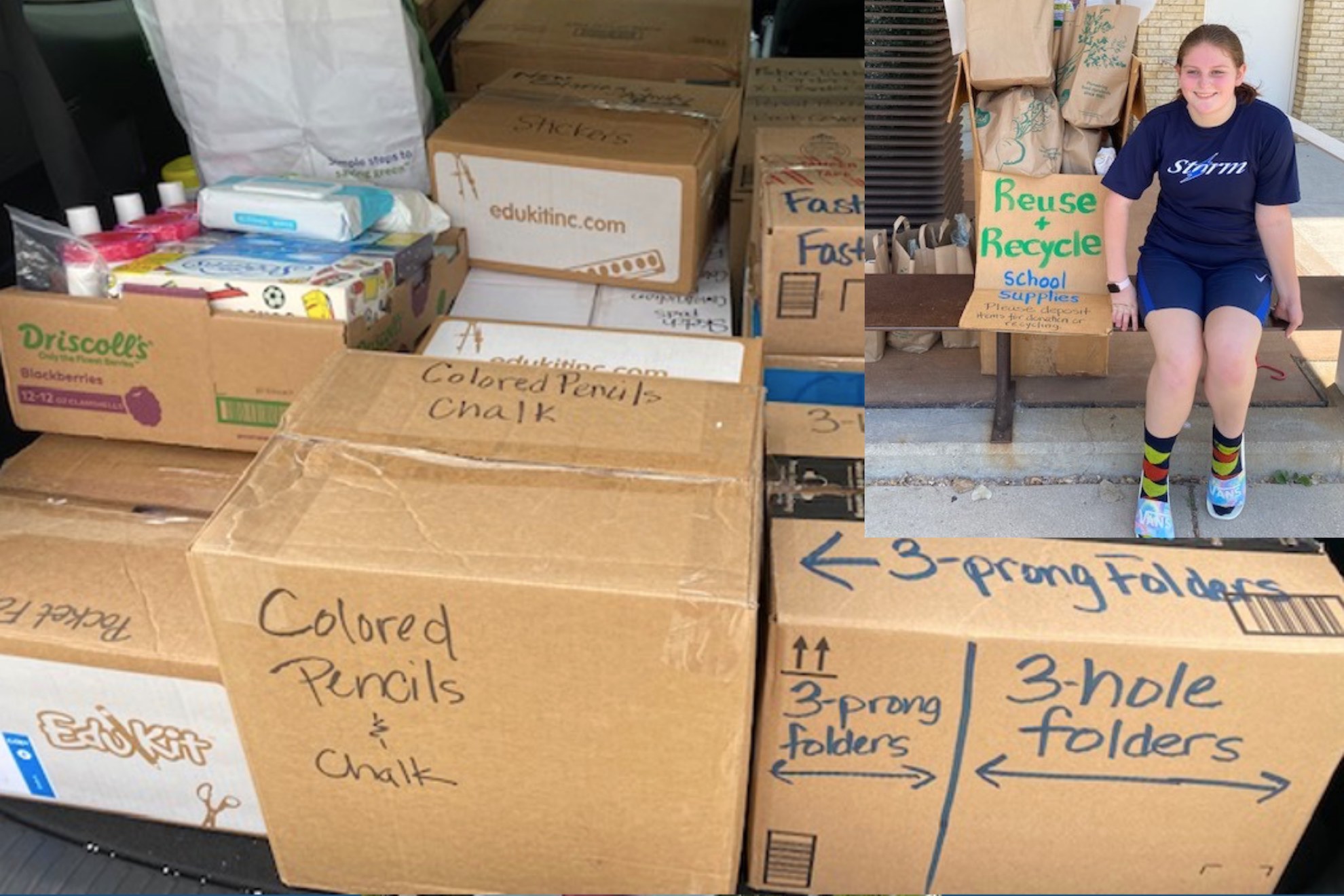 Claire Blasko, of Wilmette, with some of the supplies collected during her drive. | Photos submitted

As a child, a specific joy is achieved when acquiring new school supplies.

And in that context, Regina Dominican High School freshman Claire Blasko made hundreds of Chicagoland kids happy with her fall charity drive.

Blasko’s efforts resulted in more than 1,000 donated supplies donated to low-income elementary schools in and around Chicago. Blasko, of Wilmette, said the unusable items were turned into more than 100 pounds of recyclables.

“My expectations, I’ll be honest, were not high,” she said. “I was a little nervous if it was going to work. It was definitely a bigger turnout of good supplies than was expecting.”

With her mother, Blasko is a member of the National Charity League, a nonprofit that encourages mothers and daughters to work together on service projects.

Blasko said upon entering high school, members of the NCL are urged to complete a “passion project.” She wasted no time getting started on hers, beginning the work just after graduating from eighth grade.

In June, Blasko was touching base with local Wilmette Public Schools, such as Wilmette Junior High and Highcrest Middle School.

The schools kept collection boxes on site for a few days in August, while Blasko kept one at her home for a longer stretch.

Blasko and her mother inventoried the gathered supplies, also doing a quality check and sorting them.

All in all, Blasko logged 35 hours of service work on the project, already completing the Regina minimum for her freshman and sophomore years.

With her busy school and athletics schedule, Blasko could not make most dropoffs, but made sure to make one, Educare in Chicago, a school that requested all items Blasko had.

“I remember them specifically,” she said. “They were really grateful and happy we were doing this.”

When Blasko began to spread the word of the drive over the summer, Regina Vice Principal Verna Allworth suggested entering the drive in a competition, the Humanity Rising project, that awards scholarship dollars.

Blasko’s supply drive was named a finalist in November.

“I was on the bus when I got the email and I literally gasped,” she said. “ … It felt fantastic. If only I can relive that feeling.”

The scholarship money would be nice, but in her eyes, the project is already a success.

So much so, she’s already thinking ahead and will pitch Regina and her classmates on a second drive, she said.

“I’m very much wanting to do something like it again,” she said. “I plan on starting it a little earlier.  … I want to get people on board with me so it’ll move a little faster. I can tell them, ‘If you do it with me next year, you get service hours.’”